Wondering how the hunting system works in Resident Evil Village? This is the first game in the Resident Evil series that allows you to hunt animals in the wild. The animals can be butchered for meat, providing important survival benefits against the village’s toughest enemies. Spending your limited supply of bullets on the local livestock may sound like a silly idea, but the upgrades from these meals are worth the effort.

The animals in the village vary in size – from small fish in ponds, to large rams grazing on nearby plants. It’s considerably easier to hunt smaller animals, but the rewards from fighting off large beasts are too good to ignore and your successful hunts can be exchanged at The Duke’s Kitchen. Routinely check in with The Duke after collecting meat to see which Resident Evil Village recipes you can create.

Here, you can transform your hard-earned meat into a hearty meal. The upgrades from these meals can be the difference between life and death, so it’s important to stock up before entering a new location. Here’s everything you need to know about how hunting works in Resident Evil Village.

HOW TO HUNT ANIMALS IN RESIDENT EVIL VILLAGE

Hunting animals is a straightforward process in Resident Evil Village – simply shoot the animals to acquire its meat. Don’t worry about how you execute the animal – this isn’t Far Cry, you won’t be penalised with unusable meat. You can also slash animals with your knife to conserve ammo, though we don’t recommend doing this against large livestock as they can fight back. Small animals like chickens and fish can be killed in a single hit using your knife.

When dealing with anything bigger than the size of a chicken, you may find that these animals aren’t fond of being attacked. Don’t judge an animal’s attack power by its size – even pigs are capable of dealing lethal damage. Heal up before hunting to avoid being on the losing side of a man versus pig battle. 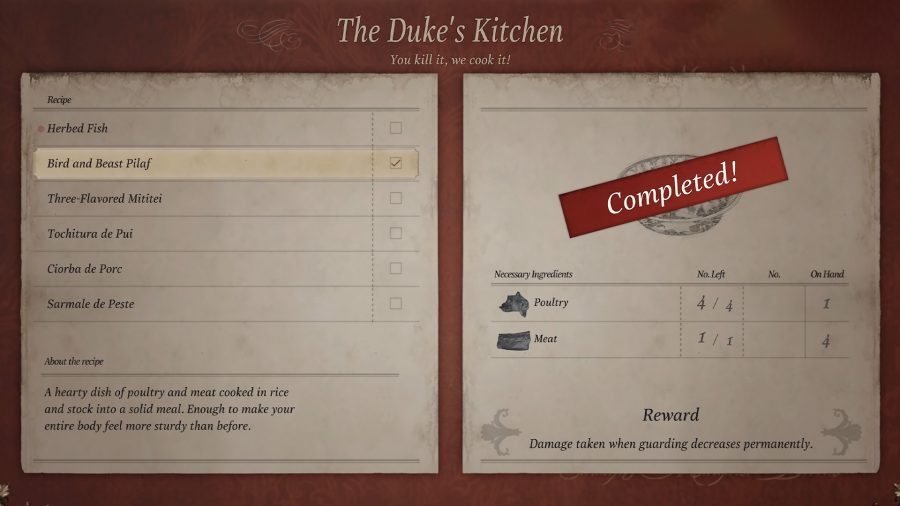 Hunting large animals using a pistol requires multiple bullets to take them down, so consider switching to a stronger weapon. Rams in particular require a lot of shots before giving up, but even smaller animals like pigs are surprisingly durable. Once you kill an animal, your map will automatically update to remind you that you’ve dealt with all the animals in one area. These animals don’t respawn so you should avoid selling meat to The Duke.

We also have a weapon upgrades guide for those who want to know how they should upgrade their guns, and several guides on some of the more taxing puzzles in the game, including the one where you have to ring Five Bells, a mannequin puzzle, the combination lock code for the violin house, and the Riverbank treasure house.