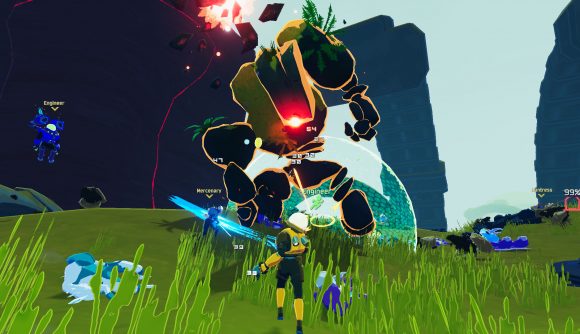 Risk of Rain 2 had the makings of a success story pretty early on – in its first month of Early Access last year, the action-packed roguelike game attracted a million players. Now, months after its full release on Steam in August, Risk of Rain 2 boasts more than three million players, and its daily player counts are on the rise.

The three million figure comes from a LinkedIn profile (spotted by Twitter user Timur222) belonging to a brand manager for Risk of Rain 2, Chris Faylor, who has been working on Risk of Rain 2 as part of Gearbox Publishing. Describing his current role with Gearbox, Faylor says part of his job has included the “initiation, planning, and execution of marketing projects for Risk of Rain 2, resulting in over 3 million players to date.”

That’s an impressive figure by any measure, but Faylor may actually be lowballing it. According to PlayTracker, which uses a cycling sample analysis to extrapolate user data on games, Risk of Rain 2 has about 4.3 million players. SteamSpy, which uses a proprietary method to extrapolate user data from achievement percentages, estimates anywhere from five to 10 million owners.

Hopoo Games isn’t planning on resting on its laurels, however. The core team has doubled in size (from three to six developers), and the 2021 roadmap includes a free anniversary update in March that adds a new survivor, a new boss, new items, and plenty more.

As 2020 is in the final days, it is time for a new Development Thoughts that detail the forecast for 2021!

Towards the end of 2021, Hopoo plans to release a paid expansion, one that’s “around 2-3 content updates in size” and “the biggest infusion of new content that RoR2 has received.”

For now, you can check out our guide to Risk of Rain 2 artifacts – that will show you how to get your hands on all 16 of them.