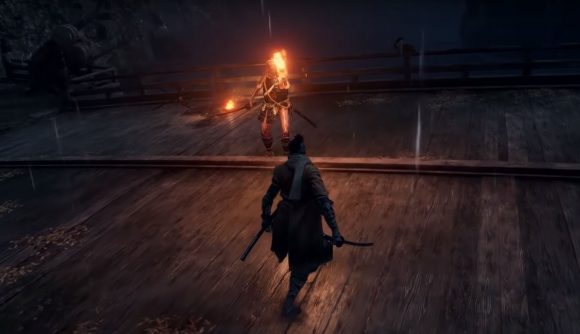 Newly-released gameplay footage of Sekiro: Shadows Die Twice provides a peek at an area of the game we haven’t seen before: Hirata Estates, which is the setting for a flashback sequence that provides some backstory for our hero and the Young Lord he’s sworn to protect.

Game Informer’s exclusive video was captured during a trip to From Software, where editors Dan Tack and Suriel Vazquez had a chance to play some of From’s upcoming game. Hirata Estates is shown during a dark and stormy night, lit by the moon and by the fires that are engulfing some of the buildings in the area.

If you’re trying to go into Sekiro: Shadows Die Twice completely blind, be warned that there are potential spoilers to follow.

Tack notes that the approach to Hirata Estates is remarkably open, and that the grappling hook allows for freedom of movement and sequence-breaking early on in the game. The whole scene is a dream or flashback sequence that’s accessed by means of a magic bell, and isn’t connected physically to the rest of the game’s map.

The burning buildings and rain are heavily reminiscent of Team Ninja’s Nioh, although there’s still plenty of From’s distinctive Dark Souls style present in the clip as well. Have a watch:


Vazquez points out that different enemy types work together more fluidly than in past From games. Part of the strategy for Sekiro, it seems, is choosing when to take on mini-bosses, which you can defeat to refill your supply of lives or resurrections.
.

Roll for initiative: The best RPGs on PC

The Sekiro: Shadows Die Twice release date is set for March 22, and it’ll be launching on PC alongside consoles. We’re eager to get our hands on director Hidetaka Miyazaki’s next offering, which will undoubtedly be dark, moody, and challenging.