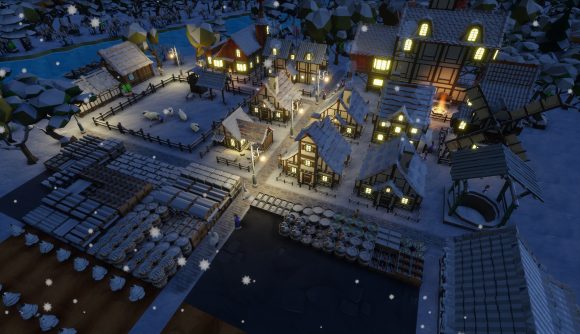 Developer Gleamer Studios says Settlement Survival was “one of the most downloaded, wishlisted, and played demos” of Next Fest, and have thus decided to move the Early Access launch date forward by four days. In it, you’ll lead an expedition of several dozen plucky pioneers as they settle a new town, carving a sustainable place to live out of the untamed wilderness.

As we’ve noted before, the colourful, low-poly art style is a bit deceptive in Settlement Survival. The devs cite Banished as a source of inspiration – that one is a notoriously unforgiving colony management game in which the changing seasons could often be lethal for your fledgling community, and the same is true for Settlement Survival. Each building must be carefully considered against the resources you have available, which ones you need, and the labour force on hand.

Settlement Survival features procedurally generated maps, natural disasters, a system for appointing and managing mayors, and a tech tree that allows you to unlock a monetary and trading system. There’s a lot of depth to the game already, and Gleamer Studio has more planned for the Early Access phase of development.

The devs expect Early Access to last at least six months, and in that time they plan to add additional difficulty challenges, more historical stories to uncover, more blueprints for unique structures, transportation and logistics systems, and – potentially – multiplayer.