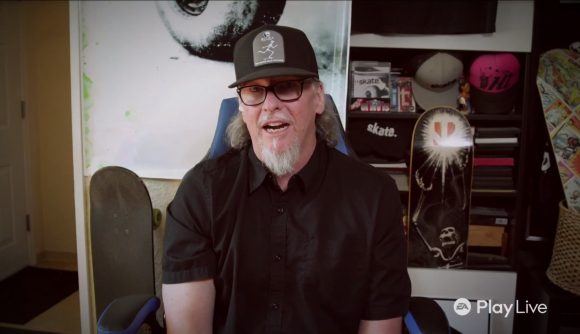 It’s been long enough since Skate 3 debuted – ten years, to be exact-ish – that Skate 4 has become a meme. Now, the meme has become a real game. EA has announced that Skate 4 is officially in development, with the original creators attached to the project.

Towards the end of the EA Play stream, Skate creative director Cuz Parry and game director Deran Chung appeared to announce to the world the fact that they’ve been secretly spinning up Skate 4.

“We’ve been waiting years, honestly, to make the right game at the right time with the right idea,” Chung said. He said that while Skate 4 is very early in development, he and Parry are “stoked” about the project. “We really can’t wait to bring you guys in and have you be a part of it with us,” he said.

Maybe the craziest part of the announcement was Parry hinting at why this has happened at all. “You commented this into existence!” he said. “Amazing! Skate changed my life, thank you so much, Skate forever!”

You can watch the brief announcement here:

We don’t know when we can expect Skate 4, but it’s likely to be a while before we see anything concrete on it. However, given EA’s recent enthusiasm for publishing on Steam, as well as its pledge to let players play wherever they prefer, it seems safe to assume the next Skate game will be coming to PCs.

We’ll be eagerly awaiting more information, and we’ll share it with you as soon as it arrives.