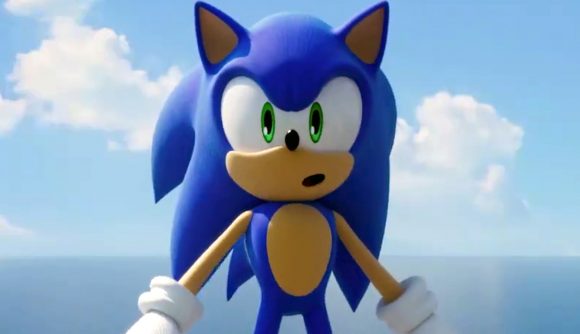 The latest game in the Sonic the Hedgehog series may not be out until November, according to a leak from the PlayStation database. At the moment, all fans know about the Sonic Frontiers release date is that it’s currently due out in Holiday 2022 – which tallies with the new report, but SEGA may have a more specific date already jotted down.

When the new 3D Sonic game was first teased back in May 2021, SEGA and Sonic Team confirmed that it was due to launch in 2022 – that’s this year now, folks, remember? – but otherwise didn’t offer any specific details. Finally, just last month at the Game Awards SEGA confirmed the game as Sonic Frontiers – an open-world 3D Sonic game where nothing can possibli go wrong.

The release in the trailer for Sonic Frontiers was down for a vague Holiday 2022 but a new leak from the PlayStation database via PlayStation Game Size on Twitter suggests that SEGA has already pencilled in November 15, 2022, as the Sonic Frontiers release date.

As PlayStation Game Size admits, this could very well be a placeholder date – and even if it’s currently accurate there’s almost a year to wait, and Sonic Frontiers could easily slip in that time. Regardless, November 15 does fit with the announced “Holiday 2022” plan so it could well be true for now – and fans certainly shouldn’t expect to see Sonic Frontiers until at least November, anyway.

While we’re waiting for Sonic Frontiers, it’s worth remembering that the Sonic Mania team is currently working on an original 3D platformer of its own. There’s also Sonic creator Yuji Naka’s Balan Wonderworld, of course, but you really don’t want to touch that.