The PC is missing its Mario Kart. You’ve got Codies’ F1 Race Stars for engines that buzz rather than roar, and Sonic All-Stars for nostalgic character clashes on twisting tracks. But there’s a “chaotic party vibe” absent from our catalogue that the 16-player Space Dust Racers might just provide – just as TV streaming and the Steam Box pull us back to our living rooms.

“That has changed significantly again in the last decade – there is much more focus on the living room as a social PC gaming environment now, and one that really suits competitive multiplayer games like ours.”

Perhaps the PC is ready for shoulder-to-shoulder shenanigans. Living room hardware, delayed though it’s been, is imminent. Doohickies like the Steam Link will make TV streaming affordable. And stunning, successful PC games like Towerfall and Nidhogg have defiantly committed themselves to couch co-op.

Space Dust Racers won’t forego online multiplayer – its Melbourne team are working with Unreal Engine 4’s tried and trusted networking architecture. But there’s a party game ethos at work here, as evidenced by its support for up to 16 players in one room. Which had to be playtested, of course. 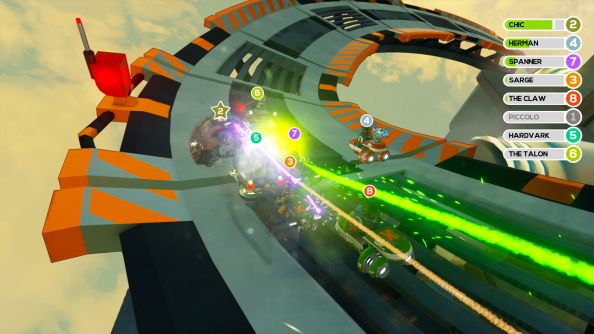 “It is chaotic,” said Thomas. “An achievement will likely be awarded if you even manage it.”

16 players isn’t so unfeasible as it might sound, thanks to some novel input tech. A QR code system allows laptops and smartphones to be scanned in and used as extra controllers – or become carriers for additional gamepads.

“We wanted to capture the chaotic party vibe of these games we love,” said Thomas, “but with new and fresh experiences set within a unique and visually exciting fiction.” 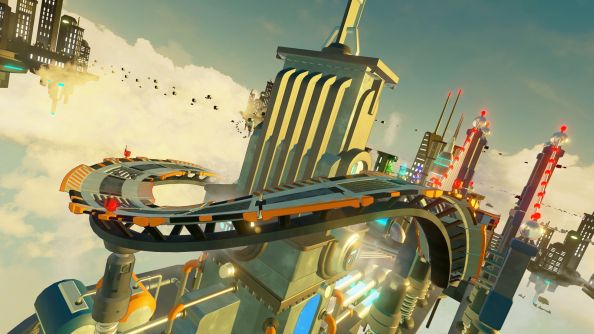 Space Dust has an intergalactic premise that’s less Space Odyssey than Space Jam. Although its developers have collectively worked on games with Dead Space, Battlefield, Need for Speed and Silent Hill in the title, they’re now eager to build a game they can play with their children.

“It does influence what we create,” said Thomas of his team’s parental status. “Simply because we want to share them with our kids.”

Space Dust Studios have settled on an art style they term ‘brutal cute’, looking to games like Worms and Ratchet & Clank as models for family-friendly violence. The four characters they’ve named to date are an even split of militaristic bots and anthropomorphised animals.

“[It] could be described as a dash of edgy explosive attitude shrink-wrapped within a fun, colorful cartoon wrapper,” said Thomas. “Everything we build runs through that visual filter. 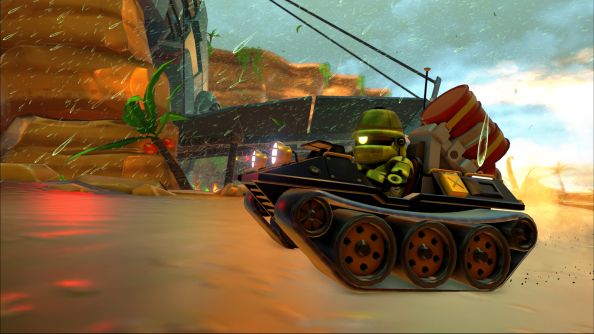 “We intentionally set out to have Space Dust Racers appeal to a broad range of gamers from kids through to the college crowd and beyond, and made sure that [it] was accessible but has depth that requires skill and tactics,” he went on. “It is difficult to master.”

Space Dust Studios have sweated over the controls – they’ll be undaunting, yet leave room enough for long-term players to discover tactical nuance. And multiple game modes will be complemented by a long list of modifiers – combinable ‘flavour’ settings like slippery handling, pinball physics or kamikaze taunts.

“You can remove everything but the BBQ weapon for a tense and strategic experience,” advised Thomas.

No one driving game in particular has influenced the feel of the vehicles – but physics model iteration was led by Michael Davies, who had a brief stint at Criterion. He’s arrived at something that feels “immediate, accessible and just a bit ridiculous”.

Recently YouTubed playtests, meanwhile, reveal a racer that’s collision-heavy. Players shoulder-barge each other for power-ups, and on one track traffic passes back and forth across their path. The pile-ups are inevitable. Elsewhere stray rockets veer across the course, and only careful deployments of fleeting force fields can save players from fiery crashes.

“Our game is combat focused,” said Thomas. “[It] was described as ‘Super Smash Bros on wheels’ when we took it to GDC this year. That is pretty accurate.”

Knocked-out players don’t return – but with rounds generally topping two minutes on the outside and sometimes wrapping up within 30 seconds, that’s not the FromSoftware take on kart racing it sounds like. And in any case, there’s an airstrike modifier that allows thumb-twiddling contestants to collectively guide a reticule over their still-competing opponents – before letting fly the missiles.

“They can still influence the action,” said Thomas, “which gets tends to get quite vengeful.” 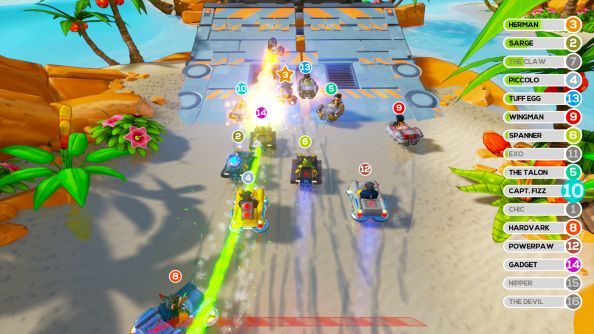 Compensation for being reduced to a fireball comes in the form of lovely lighting effects. Unreal Engine 4 has provided Space Dust’s artists with a “superb” toolset, and the engine has been a “great fit” for the game overall.

“We were really fortunate to be a showcased project on the Unreal Engine stand at GDC this year, which meant we had loads of people stopping by to play an early build,” said Thomas.

“The reaction was amazing and positive, with many people coming back multiple times often dragging some friends along and then trash talking one another. Nothing beats seeing people enjoying something you’ve made.”

Release is a long way off, slated for early next year. It remains to be seen whether Space Dust Racers can mimic the very particular charms of Mario Kart on PC – but maybe it won’t have to. We’ll certainly settle for Super Smash Bros on wheels.

In this sponsored series, we’re looking at how game developers are taking advantage of Unreal Engine 4 to create a new generation of PC games. With thanks to Epic Games and Space Dust Studios.