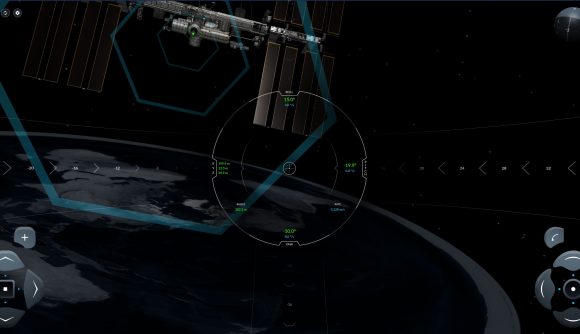 If you’ve been PC gaming for any significant length of time, then the idea of a virtual trip into space is probably old hat by now. We’ve even seen one of the world’s leading space agencies collaborate with Kerbal Space Program on educational materials, right? Still, it’s still exciting to try out some of the current hardware, and SpaceX has created an ISS docking simulator you can play right in your browser.

The sim puts you at the controls of a Dragon 2 spacecraft, a capsule that’s currently in use to transport crew and cargo to the International Space Station. Your job is to connect the hatch on the Dragon 2 with the NASA Docking System on the ISS, and you’ll be using the same control scheme found in the real-life capsule to adjust the craft’s roll, pitch, yaw, and translational movement.

Orbital spaceflight is deceptively slow and graceful when we see it in movies or television – everything looks slow and deliberate. While movements are certainly deliberate up there, they’re anything but slow – the ISS is always moving at about 4.76 miles /per second/ as it orbits Earth, and everything that wants to dock with it has to match its speed exactly.

You can try your hand at it by heading over to SpaceX’s site – the sim runs right in your browser, and only takes a few fiddly minutes to complete.

Once you’re done, you can look at the settings to find you have options for Earth. By default, the simulation includes an oblate spheroid – or ’round’ – Earth, but you can optionally set it to display a flat Earth. Set it to this and pitch the Dragon 2 forward and you’ll see a spinning disc, with the ‘north pole’ at the centre and Antarctica around the outer rim.

Then, as you inch your way toward the space station at 17,150 miles per hour, try to imagine where you’re actually heading with all that speed. Once you’re done, prepare for the jump to hyperspace with our list of the best space games on PC.