Looking for some of the best free online games to play right now? Publishers like Steam and Epic Games are busy locking horns over their digital storefronts and platforms, but there’s a rich world of fun browser games that can be accessed directly through the web. No launchers or two-factor authentication, no agonising downloads or hard drive space juggling, just instant, free online games.

The best free online games and browser games have even gone onto to inspire larger budget remakes and spin-offs, like My Friend Pedro and Kingdom of Loathing. Impressively, despite the obvious tech constraints developers have also managed to craft free online games to cover any genre you can imagine, so yes, you can play a 100-player battle royale in your browser. So whether you’re looking for something to sink a few minutes into or your next gaming habit, there’s a free online game for you.

We’ve tried to ensure this list caters to all sorts, all at the enviably low price of free.

Here are the best free online games for PC: 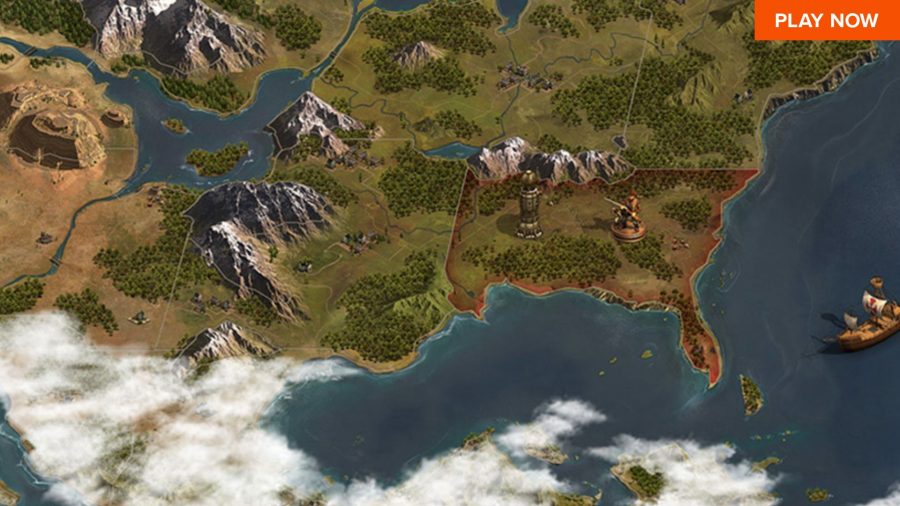 Forge of Empires takes elements from the Civ and Age of Empires series and mixes them together to create one of the PC’s best free online games, no download required. You start off in the stone age with a few shabby huts and a couple of spearmen to prop up your humble enclave of humanity, and over many, many hours you’ll progress your people through several historical eras, researching new military, scientific, welfare, and cultural institutions. Combat and expansion play out in separate screens, offering a little more space for players to flex their tactical muscles.

Play Forge of Empires for free 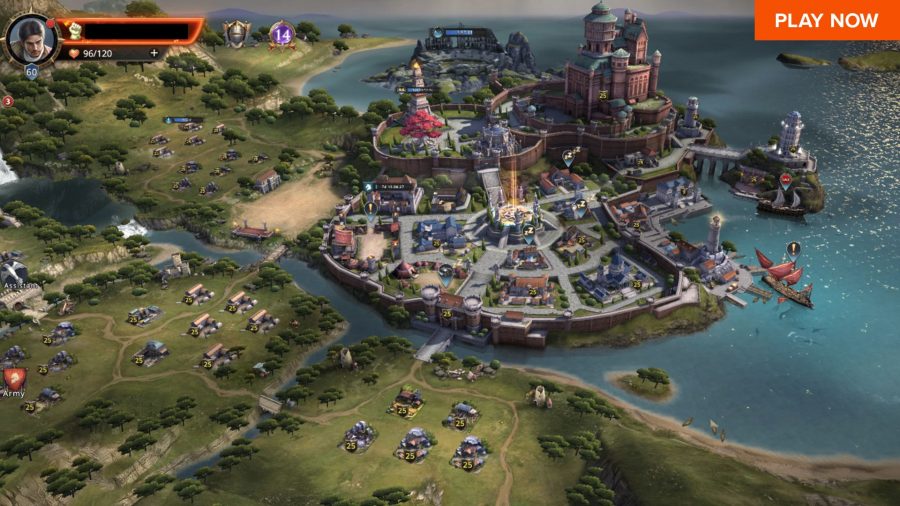 GAME OF THRONES WINTER IS COMING

If you’re looking for an official Game of Thrones game then this is pretty much your only option on PC, and the fact that it’s a free online browser game doesn’t hurt either. You guide your very own lord on a path to greed and power on server map modeled after Westeros, complete with all the major landmarks you encounter in the novels and TV series. Your aim, as in an MMO strategy game, is to grow and accumulate wealth and power, taking over more and more land before you’re ready to launch an attack on a major stronghold like Storm’s End, The Eyrie, or King’s Landing.

Aside from being able to add famous faces from the franchise to your army like Arya Stark, Jon Snow, and Daenerys Targaryen, one of the game’s best features is its JRPG-inspired battle scenes, which offer the kind of cinematic flair and scale that’s often missing from free browser games.

Play Game of Thrones: Winter is Coming for free 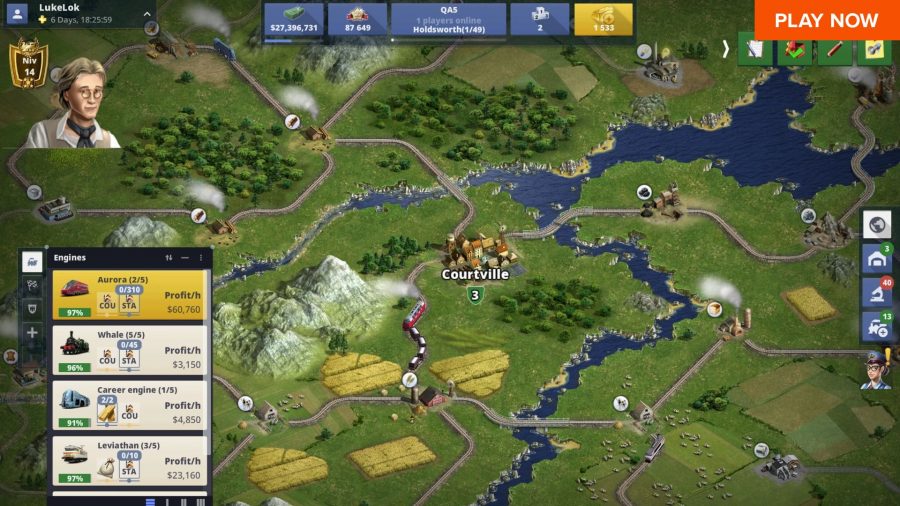 Rail Nation isn’t exactly for train games fanatics – this is a strategy game at its core, where you’ll spend your time making deals and expanding your railway empire rather than cruising along the Settle-Carlisle. Like many great browser-based online games games, you’ll start small and slowly amass a vast network of railway lines, eventually allying with other railway tycoons to make your association as powerful as possible. There are heaps of train models to choose from and upgrade to, but for the most part this is an online strategy game all about economics. 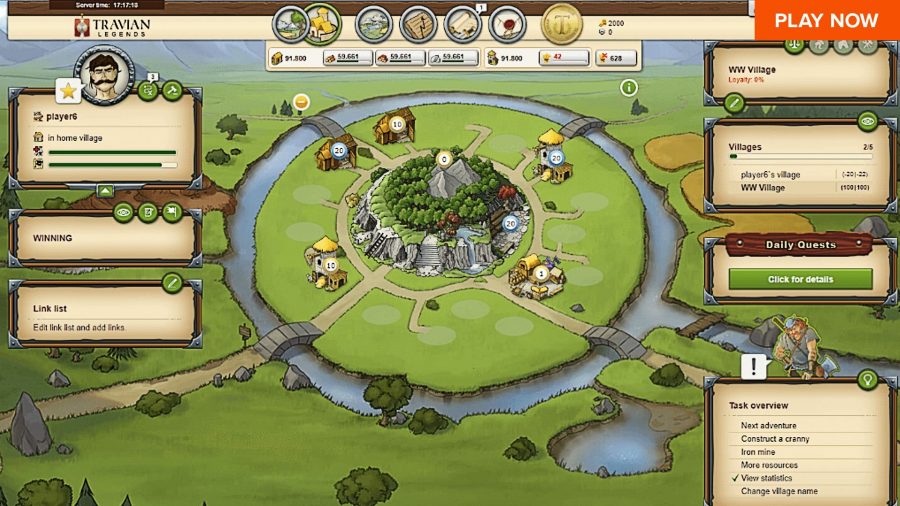 Travian has been knocking around for well over a decade, building up a loyal fanbase of MMO and strategy games enthusiasts and laying the foundations for many other entries on this list. Legends is its latest form, boasting gorgeous graphical upgrades while still being one of the few online games that doesn’t require a download.

The gameplay is refreshingly simple with very few hidden mechanics: you choose one of a handful of factions, found your tribe, and grow from a ramshackle village into a fortified, technologically advanced empire. You can keep yourself to yourself if you want, but if you do want to branch out there are also trades, alliances, and plenty of warfare to throw your clan into at a moment’s notice. There is some waiting around for buildings and actions to complete, but if you treat this as a relaxing game then you won’t find it too egregious. 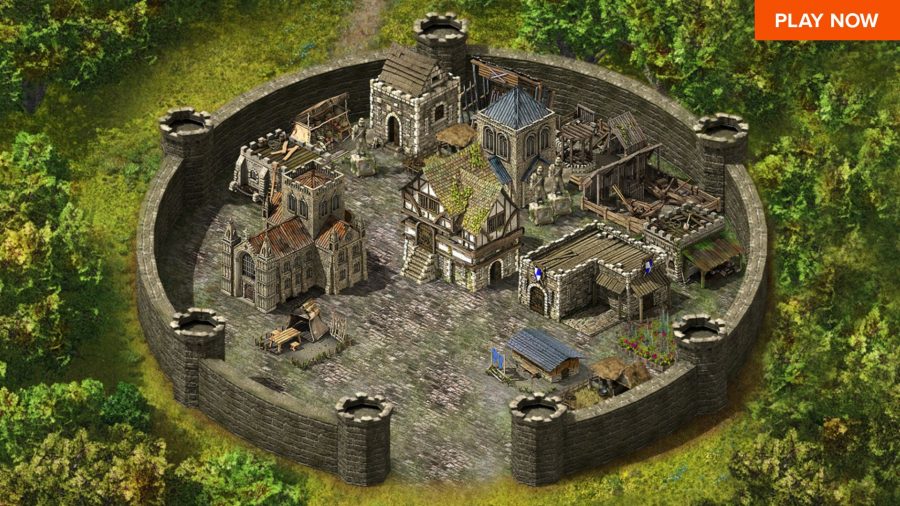 The MMORTS genre might not be as widely recognised as the best MMOs and MMORPGs, but it’s on the rise, and Stronghold Kingdoms is one of the best examples around. This massively multiplayer real-time strategy game casts you as a feudal lord or lady and sets you to work building and growing a medieval empire by besieging your rivals, researching invaluable new tech, and forming alliances with others. It does require a tiny download to play, but the download itself is tiny and the game should run on any rig.

Like many free MMO RTS games, Stronghold Kingdoms is packed with depth if you’ve got the time to sink into it, with political struggles between players and large-scale wars to navigate on your rise to success. And sure, the graphics certainly look like they come straight from the late nineties, but they’re nothing if not charming. 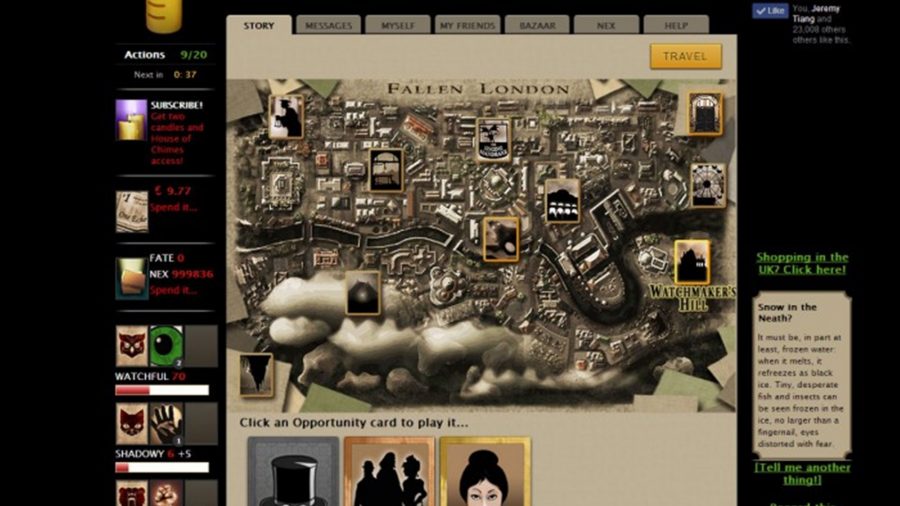 Sunless Skies developer Failbetter Games has established itself as a fine crafter of narrative games since it came together in 2010. It’s there to see in one of the studio’s earliest efforts, too. Fallen London is a browser-based interactive narrative game that takes you to a Victorian and gothic take on the Old Smoke. The city itself has been stolen, and it now rests underneath the rest of the world on the shore of the Unterzee. You’ve just arrived, and you’re down on your luck. That doesn’t mean you can’t rise to the top through the legal and illegal activities made available to you, though. 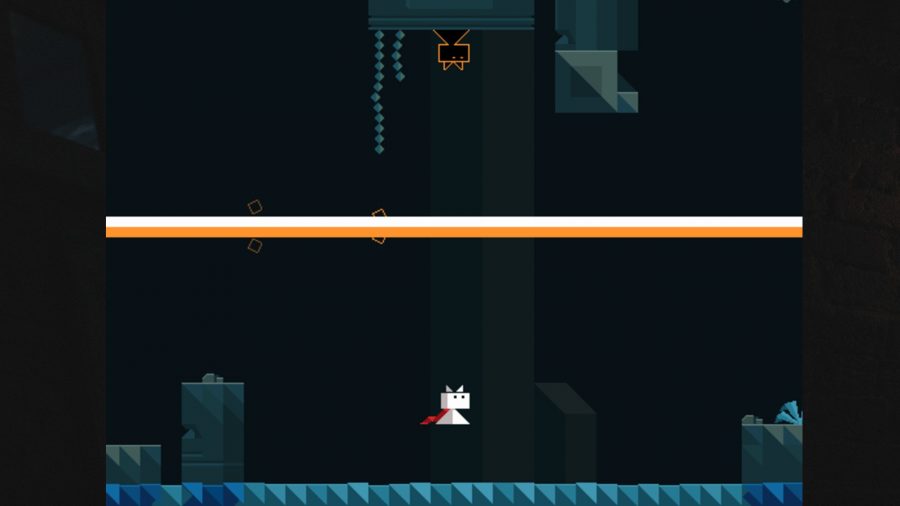 Like all great platformer games, Ditto has its own spin on traversal to keep you guessing through its many, many levels. Every level is divided in two, with a reflected version of your character copying all of your actions, albeit in a sort of shadow realm where the obstacles are slightly different – if your shadow version falls off a ledge or is killed by a monster then you both perish. 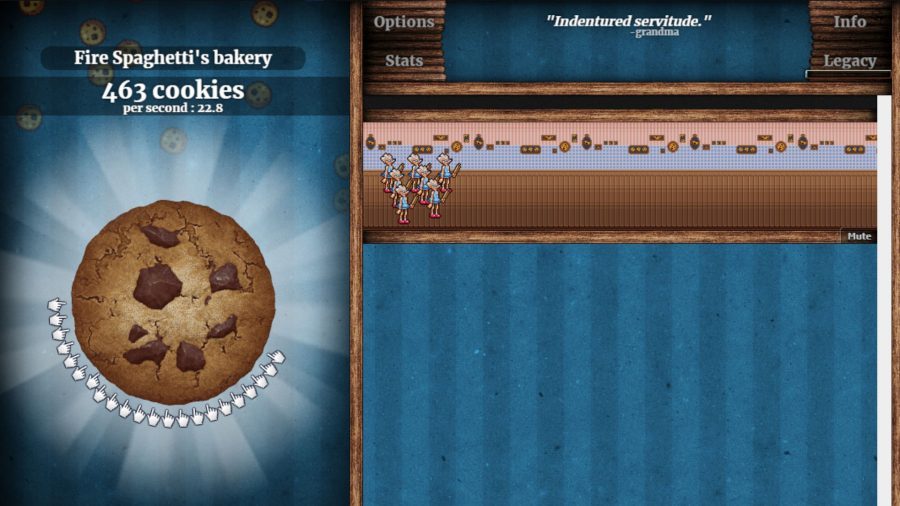 Idle games are the ideal free online games for if you’re too busy to actually play a game, and Cookie Clicker is one of the best examples of the genre around. You start with a giant cookie that you click on to produce more cookies, then you spend those cookies on upgrades like automatic cookie-clicking fingers to click the giant cookie for you, grandmas to bake more cookies, or temples to pray for cookie-creating buffs. Before you know you’re producing hundreds of thousands of cookies per second.

Making numbers go up and up and up forever and ever is pretty addictive, so it goes. Cookie Clicker is one of the most famous computer games online, and the fact that it’s still being updated and played by thousands speaks to its endless appeal. 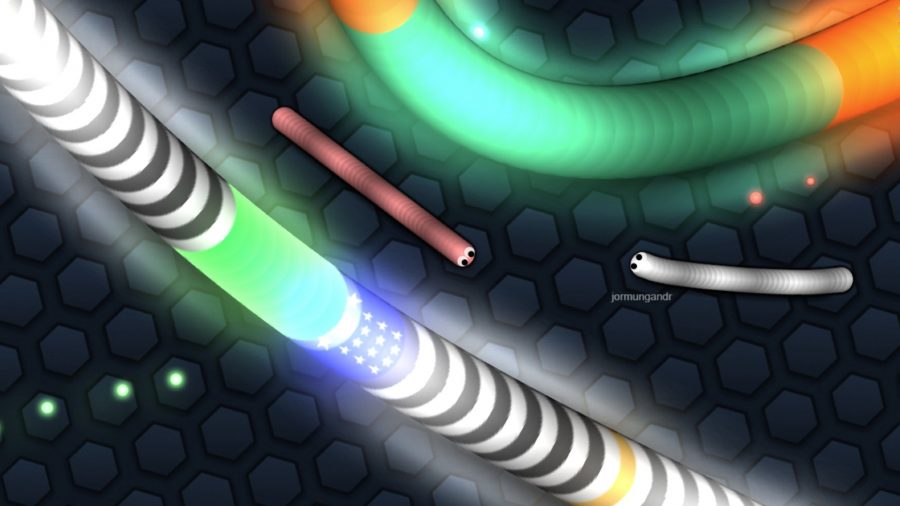 Io games are some of the most relaxing games on PC and offer a great break from work or more focused gaming. Slither.io is pretty simple: you’re a worm who slithers around a circular petri dish-like space gobbling up food and growing in length. There are other player-controlled worms to avoid or consume depending on whether you’re smaller or larger than them. 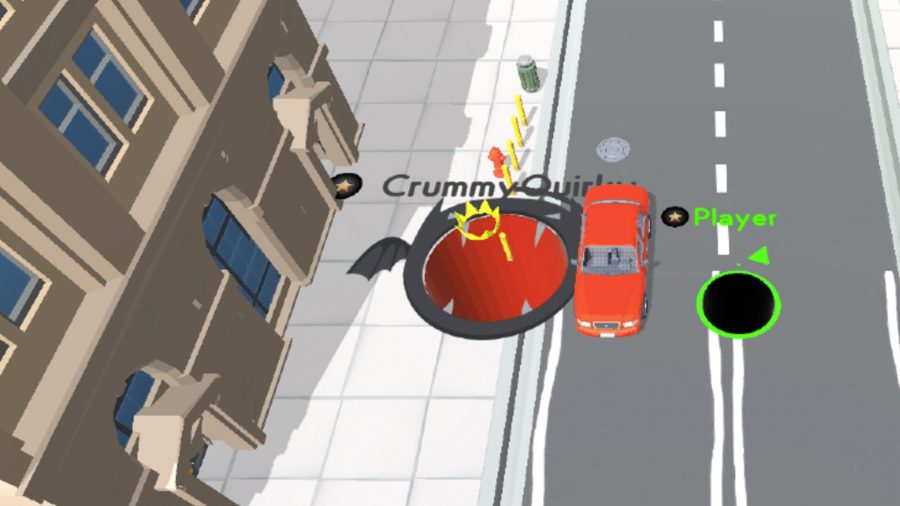 If you’ve played the endlessly charming Donut County then you’ll be familiar with the core gameplay of Hole.io. You play as a hole in the bottom of the world that expands as objects fall into it. You’ll start small by hoovering up pedestrians and fire hydrants before graduating to trucks, buildings, and eventually skyscrapers. If you’re after chill free online games to play now then Hole.io will hoover up your attention almost immediately. 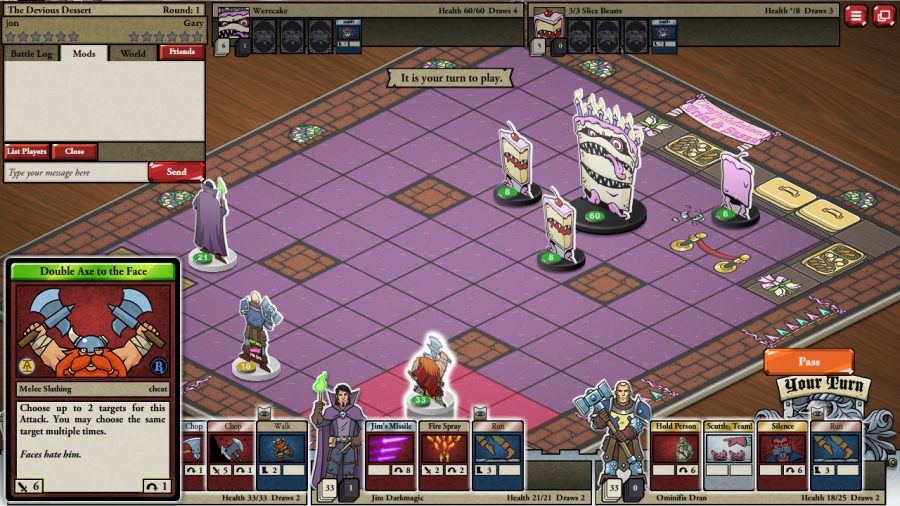 This D&D-inspired card battle game mixes tabletop RPG elements with the deck-building gameplay of a CCG in a way that’s fresh and nostalgic all at once. You build a deck of cards for each of your party’s heroes by assigning them the weapons, armour, and trinkets you collect as loot on each of your adventures. 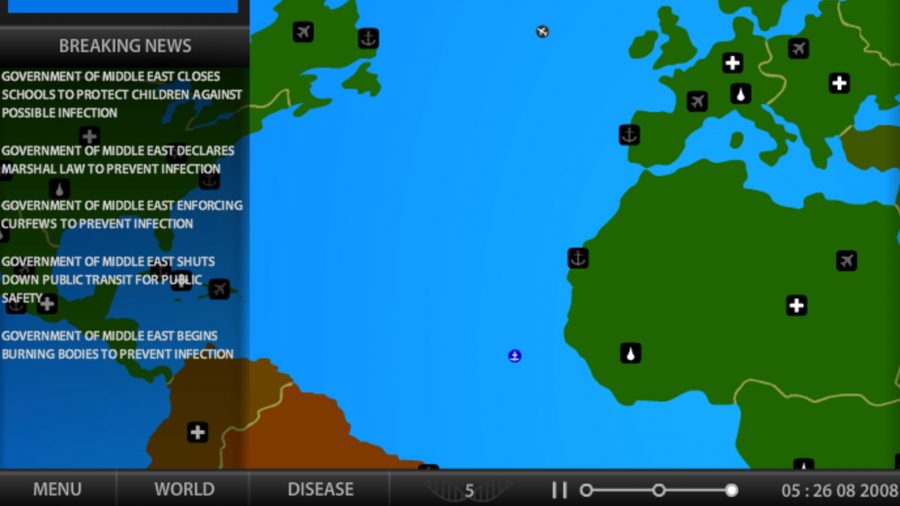 If you’ve played Plague Inc. then you should have a pretty clear idea of what Pandemic 2 is all about. This strategy game casts you as a budding virus, parasite, or bacteria on your quest to infect everybody in the world. Charming. 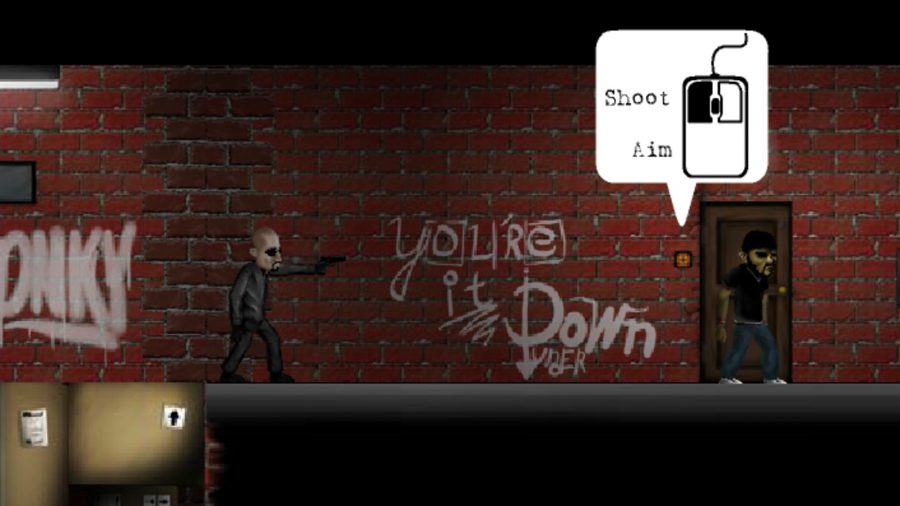 There may be a shiny new version of My Friend Pedro on Steam, but the free online browser version that launched back in 2014 is still heaps of fun. This side-scrolling shooter is heavily inspired by Max Payne, so expect lots of slow-mo diving sequences and gratuitous gore. 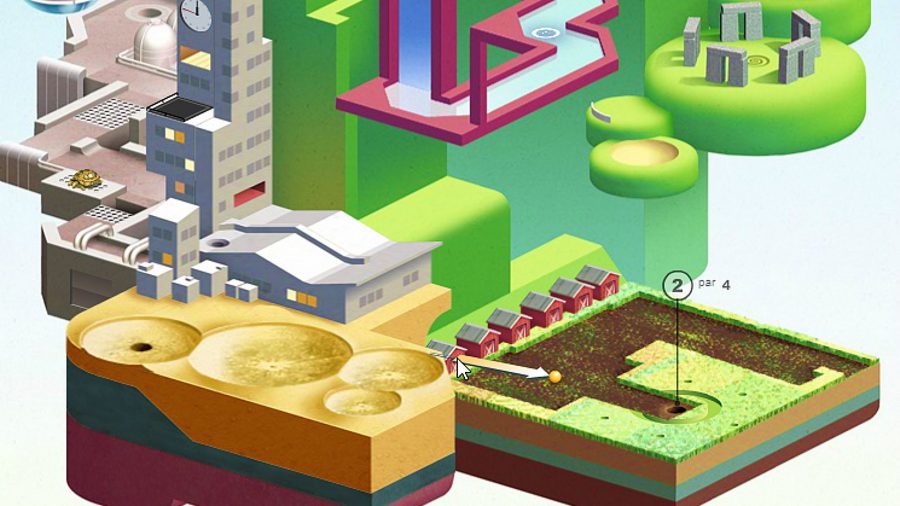 This gorgeous isometric putting game has the whole course in view from the start, and with each section you complete a new one will spring up with ingenious animations. There are some light puzzles to navigate – as you’d expect from a mini golf course – and a seductive level of depth as you try to beat your score (or just make par) with increasingly ambitious shots. 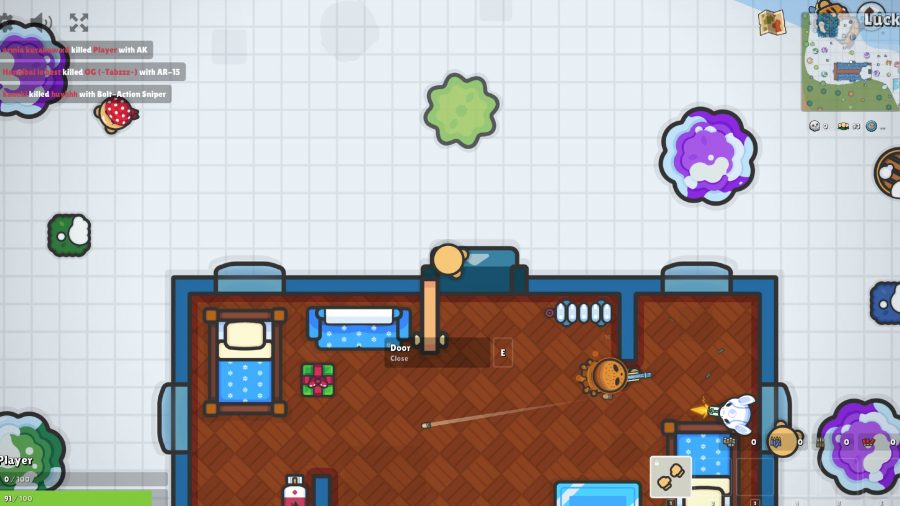 It really is quite incredible that one of the best battle royale games on PC is a free online browser game. Zombs Royale takes the simple assets and controls of Zombs.io and adds all the trappings of a PUBG-like, with a shrinking playable zone, random loot to scavenge, and 99 other players to outlive. It’s ridiculously fast-paced, so if you need to kill a couple of minutes and grab a poultry dinner than this one’s for you. It’s refreshing to see that the limits of free games with no downloads are still being pushed. 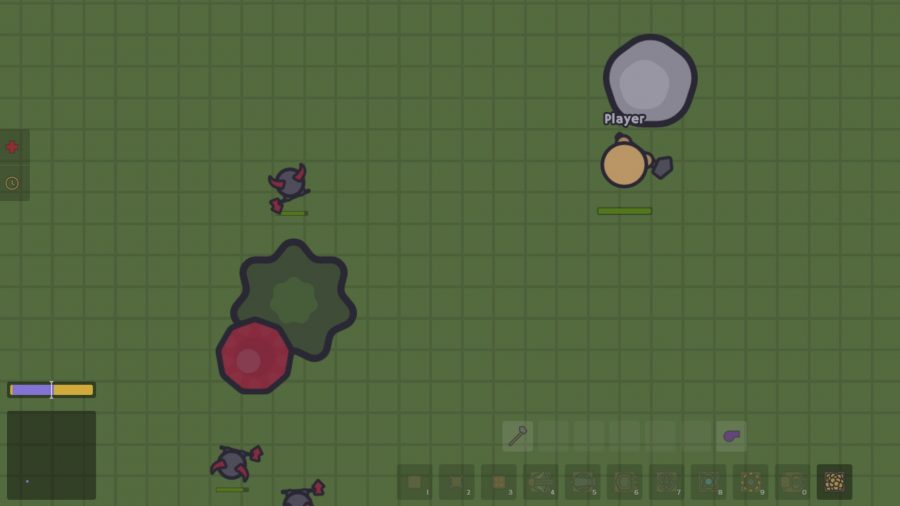 Zombs.io is an impressively deep ‘survive the night’ style zombie game where you build a base, farm resources, build up your defences, and prepare to hunker down after the sun goes does and the undead begin attacking your base. Like other io games there are plenty of other players to fend off, too, so don’t leave your base undefended during the day either. 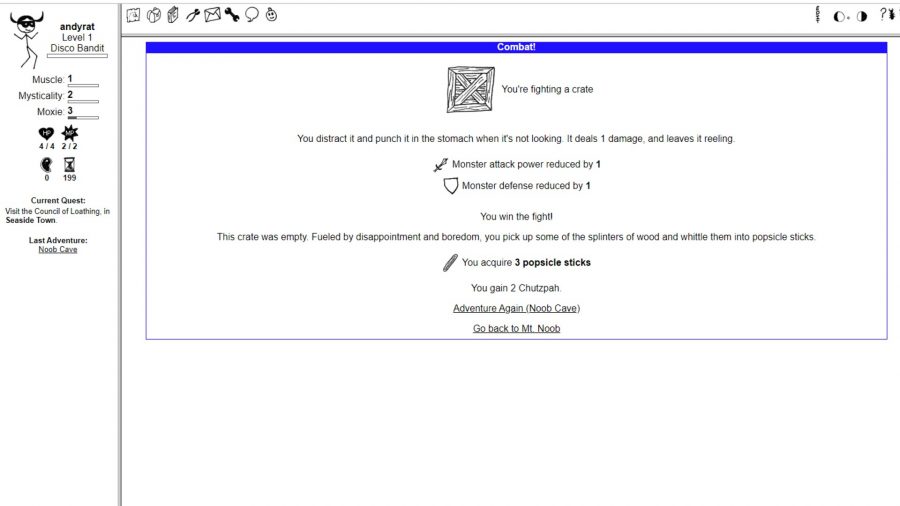 There aren’t many funny games in general, let alone comedic free online games. Fortunately, Kingdom of Loathing is on hand to plug the gap with its ludicrous spin on classic RPG classes, like the saucerer who flings hot sauce at enemies to damage them, or the pastamancer, who can control long, lethal strings of pasta to take down foes from afar. As well as being ridiculous and humorous, Kingdom of Loathing is also a fully functioning MMORPG, with clan dungeons and PvP combat. So, if you’ve ever wanted your free online games with a smidge more food fights and seal clubbing then KoL is most definitely for you.

And there you have it, a list of the finest online games at the fairest price of all: free. Of course if you’re wanting a bit more from your free PC games then we have a list of free MMOs and free Steam games, too. So, what are you waiting for? There’s a whole world of free online games out there.