The Star Wars: Squadrons release date is approaching quickly, which means before long we’ll be hopping into dogfights with some of the best pilots from both the Galactic Empire and the New Republic. There’s a new video out now from EA Motive, LucasFilm, and Industrial Light and Magic that introduces one of those pilots, and you can even cop his look.

The CG short film ‘Hunted’ is set before the events of Squadrons and features TIE Squadron Leader Varko Grey, an Imperial pilot who finds himself in a losing battle after a New Republic surprise attack on the empire’s orbiting shipyard over Var-Shaa. The imperial commander orders a retreat and signals for the fleet to make the jump to lightspeed, but Grey still has pilots out in the fray. On the way back to the stary destroyer’s hangar, he turns back to find his missing pilots.

He’s too late, and before he can make it back to the hangar, the Imperial fleet zips away, leaving him to fend for himself as the New Republic’s forces advance into the sector. He drifts into a debris field and shuts his systems down, hoping to remain undetected. 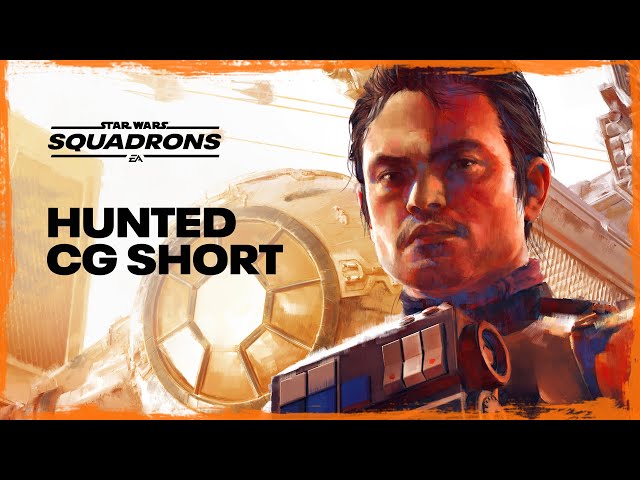 One vigilant X-wing pilot suspects something’s up, and searches through the debris, ultimately finding Grey and pursuing him down to the surface of Var-Shaa. Grey, his TIE interceptor badly damaged, has some white-knuckle flying to do to keep ahead of the X-wing’s attacks.

It’s an impressive short, with some fantastic pyrotechnic effects during the battle and chase sequences, and Varko Grey is an easy character to sympathise with, even though he’s flying for the normally irredeemable Galactic Empire.

EA has also produced some extra incentives to pre-order Star Wars: Squadrons – if you do, you’ll get a set of cosmetic goodies for both the Imperial and New Republic sides, including skins for the X-wing and TIE interceptor, a New Republic Recruit and an Imperial Ace flight suit, recruit and ace starfighter skins, and matching decals.

EA Motive is going pretty old school with Star Wars: Squadrons – it has the weapons-shields-engines power management system X-Wing and TIE Fighter players will fondly remember, and a ‘hardcore mode‘ that effectively turns it into a flight simulator rather than a mere arcadey space game.

We’ll be zipping our flight suits up for when it launches next month.