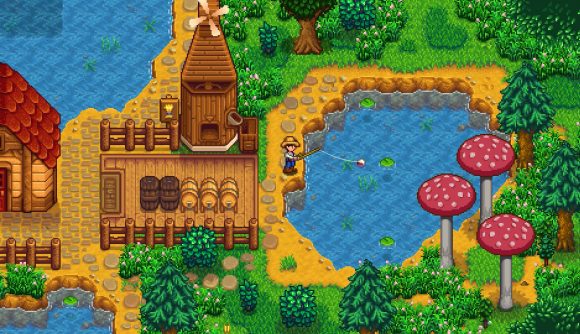 The latest Stardew Valley update broke multiplayer fishing, but a hotfix has been released. The farming game has been on a high since the rollout of one of its biggest waves of new content since launch.

Late last year, Stardew Valley update 1.5 came out, bringing a new region in addition to a mass of other features. A few incremental updates have come since, fixing and tweaking everything so the open-world game remains stable and hospitable to all players. Unfortunately, update 1.5.3 proved a touch counter-intuitive in this respect, breaking the fishing in multiplayer.

On Saturday morning, developer Eric ‘ConcernedApe’ Barone tweeted about the issue, acknowledging the bug and saying that a hotfix is being worked on. An hour or so later, the hotfix was live, hopefully quashing the problem for good. These are all the kind of teething pains one can expect when releasing a mammoth new wave of gameplay, especially for an indie game. Make sure to keep an eye on the help and bug reports section of the forum if you need a solution for anything, or have an issue that warrants being looked at.

Stardew Valley 1.5 has been a hit among the community, driving a new all-time player-count record.

If 1.5 isn’t enough for you, we recently covered mods that overhaul the cooking, add another new region, and insert Studio Ghibli creatures as critters.