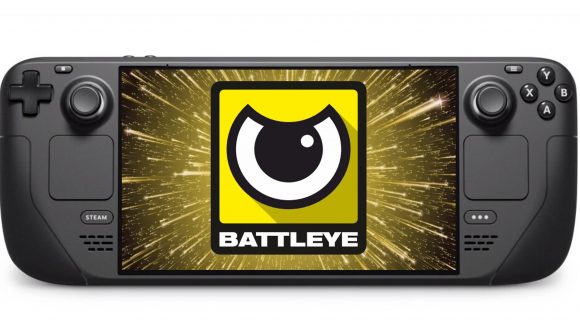 Just a month before Valve’s handheld console is due to ship, at last, Steam Deck has finally confirmed support for the two biggest pieces of anti-cheat software around – Easy Anti-Cheat and BattlEye, clearing the path for the likes of Fortnite, Rainbow Six Siege, and Halo: The Master Chief Collection to run on the new hardware.

While Epic and Valve previously announced all the way back in September that Easy Anti-Cheat would be made compatible with the Steam Deck at launch, some developers remained unconvinced as recently as this month – including Fatshark, the developer of Warhammer: Vermintide 2, and Dead By Daylight’s Behaviour Interactive. DayZ developer Bohemia Interactive echoed these concerns with the BattlEye software on Steam Deck.

Well, according to the Steamworks team’s latest update, it “is now a simple process” to add Steam Deck and Proton support to games running Easy Anti-Cheat and BattlEye – and offer instructions on how developers can do this.

“This means that the two largest anti-cheat services are now easily supported on Proton and Steam Deck,” the update confirms. The first test data for “tested titles that use anti-cheat middleware” will apparently go live this Monday, January 24th. “We’re very excited to be able to make this announcement as it means partners can continue to use their existing cheat prevention tools while adding support for more amazing games on Steam Deck,” the update concludes.

Time will tell, of course, whether things are as straightforward and hunky-dory as this update from Steamworks makes out – but if things are truly sorted for games running EAC and BattlEye then everything’s set for the Steam Deck’s release next month. Hopefully.