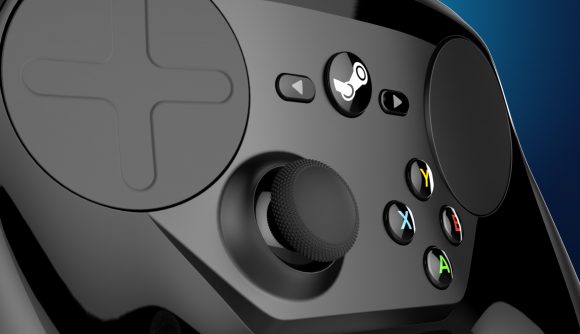 Valve’s Steam controller never quite caught on, and it seems that a large part of this had to do with its forward looking but unfamiliar looking surface layout. Rather than your usual thumbsticks, the pad had two clickable trackpads, and these seem to have scared most players away. But it seems Valve is taking another crack at it: the company has filed a new patent for a controller, and while it seems to be retaining most of the original Steam controller’s features, it’s also adding one of the Xbox Elite controller series.

The patent filing, which Tyler McVicker posted to his Twitter account Saturday, specifies that Valve’s controller will feature the swappable control surfaces we’ve found in the Xbox Elite since it launched. Valve’s going a step further – while the Xbox Elite features swappable D-pad and thumbsticks, Valve’s patent suggests its next Steam controller will allow users to pop out the trackpads and replace them.

Further, according to the patent, the controller should be able to detect different types of controls when they’re attached, allowing it to process input differently depending on which accessory you have coupled at a given time.

The description and drawings also suggest that the controller’s back plate, part of which forms the original Steam controller’s rear paddles, would similarly be swappable, and like the joysticks and D-pad, identifiable by the controller.

A new patent has been published from Valve of a Steam Controller with swap-able components. pic.twitter.com/8X5IiKIHvm

Keep in mind, the drawings included with patent applications frequently bear almost no similarity to the final product, so don’t draw many conclusions from the fact that the form of the controller shown in the document is nearly identical to the original Steam controller. It’s almost a certainty that Valve has iterated on this design in the intervening years since the first pad launched.

The idea is certainly an interesting one: popping a taller joystick or differently-formed D-pad onto the controller could automatically activate a profile for a specific game – and one of the Steam controller’s big strengths was its near-infinite customisation potential.

Whatever Valve has planned for its next generation of Steam controllers, it’s sure to be something that’s interesting at the very least.