Hello there, Ben Maxwell here (check the byline if you need proof). You may remember me from such momentous occasions as the one where I deployed the greatest Soulslike joke of all time (it’s the Dark Souls of Soulslike jokes), the other one where I proffered an eloquent and impassioned op-ed on the nature of Dragon Age fandom, or the other other one where I earnestly celebrated the importance of family ties in Fallout 4. Oh, and I’m the editor of PCGamesN, too.

Or, at least, I have been. You see, this is my last day in charge, and my final opportunity to deprive the team of the additional lumps of coal they keep asking for. I’ve been keeping this lot some way below room temperature for over two-and-a-half years now – as with PC hardware, it is proven that writers work more efficiently when cold – and I’ll sincerely miss their fervent, somewhat tremulous pleas for carbon morsels.

However, before you delete your homepage bookmark – blindly lashing out in a fit of disoriented grief, the sorrow of knowing I shall no longer be helming this bright-orange internet beacon simply too much to bear – be heartened: I am leaving the site in very good hands indeed. The exact same team, in fact, that has helped to nearly double traffic since January, and even filled the modest gaps in between my prolific editorial output (and, erm, knowledge).

Richard Scott-Jones, youngest of the Tzu-Brosnan dynasty and unavenged bladeless fan victim, will be stepping into the luxuriously heated Editor’s chair. What Rich doesn’t know about Total War and Civilization isn’t worth knowi… well, actually it probably is worth knowing, but he was too busy boning up on Destiny lore (and telling us all about it in morning huddles) to learn those bits.

‘But Ben!’ I hear you cry. ‘Who, then, is going to handle the Deputy Editor’s duties?’ Well, I’m very glad you asked (primarily because I couldn’t think of a good segue): it’ll be Jordan Forward, the man with whom I have exchanged the most Spotify recommendations, whose SEO talents are matched only by his French press skills, and the sole Rainbow Six Siege player better than me out of the two of us. 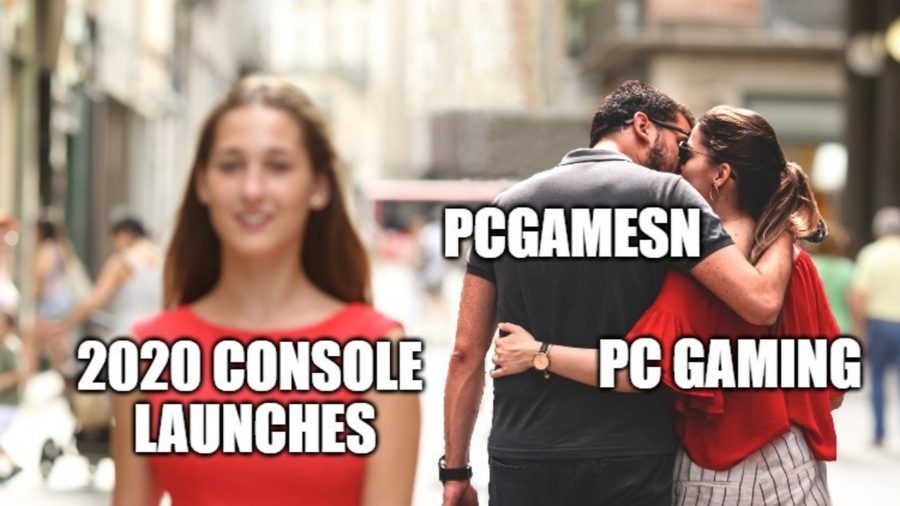 Talking of SEO (how’s that for a segue?), the sharp wit that we refer to simply as ‘Gina Lees‘ is going to take up the Guides Editor mantle and SERP zero the living fudge out of the internet. You have been warned.

These are, of course, just three parts of a stonking overall unit. Who could forget Carrie – half cat, half news desk, all Fable?; Iain – dogged Rockstar correspondent and a man who’s filled the cullen skink-shaped hole in his heart with crime; coaster-shipping, functioning mic-phobe Jen, who will end you in Dota; aggressively unapologetic weeb and helmeted Half-Life specialist, Dustin; perennially contemplative Democrat and primary Twitter protagonist, Ian; one-man IT department and Minority Report workstation advocate Damien; weaver of news gold and golden beard hair, Anthony; and last but not least Joe – what Joe doesn’t know about Total War and Civilization isn’t worth knowi… oh nuts. Erm, he just really knows his strategy games, OK?

All told, a group of enormously talented writers, and a team I’m honoured to have had the opportunity to be part of. I’m very excited indeed to watch the site continue to grow under their stewardship.

While I’m certainly sad to be leaving that portion of my career behind, I do feel much better in the knowledge that I’m still going to be able to boss Rich around in my next role as Group Editor. And don’t you worry about the rest of the team slacking – as my final act in office I’ve swallowed the key to the coal shed.