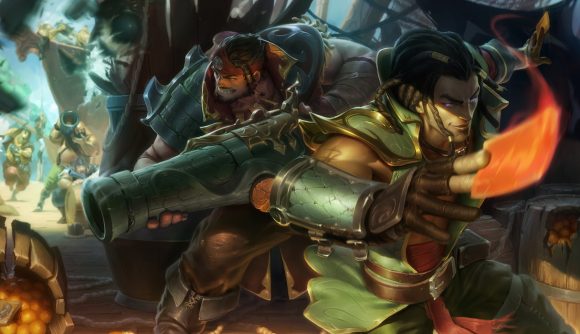 League of Legends Studio Riot will soon be adding a new champion to its turn-based autobattler Teamfight Tactics, according to some of its employees – or ‘Rioters’, as they’re known. This would be the first addition to the game’s base roster of 50 champions – and it looks like the candidate is Cutpurse Twisted Fate.

As spotted by Rift Herald, Twitter user Riot Wittrock, set designer at Riot Games for Teamfight Tactics and formerly of the Summoner’s Rift (balance) team, has posted a cryptic tweet hinting at the new champion’s upcoming arrival. It says “Champion #51 is coming to TFT…” with an image attached of a close-up of what, at a glance, appears to be character splash art (which you can see in the tweet embedded below).

Teamfight Tactics Product Lead and former product lead of the Summoner’s Rift team, Richard Henkel, has seemingly corroborated this tease, retweeting Wittrock’s post, and adding “Who could it be?” with a ‘curious face’ emoji for added effect. Well, Teamfight Tactics players have already had a good guess – and it looks like they’re probably right.

Multiple users have posted their conclusions in the threads following these tweets and it’s evidently a zoomed-in snippet of Twisted Fate’s Cutpurse splash art. Look closely at his left arm at the right-hand side of the picture – the tweeted picture is almost certainly a close-up of this part of the image.

Champion #51 is coming to TFT… pic.twitter.com/x3yE1bsh2M

It’s not been confirmed by the studio officially that Twisted Fate is heading to the autobattler, but given these two hints by Rioters in-the-know, it’s looking pretty likely. Exciting stuff for Teamfight Tactics’ already enthusiastic and sizeable playerbase – particularly if he comes with some cool tricks up his sleeve.

We’ll have to wait to see if and when the new champion bursts onto the Teamfight Tactics scene, but in the meantime you can check out our guides on how to upgrade your champions, the best in-game items, and even how to play Teamfight Tactics if you’re new to the autobattler.