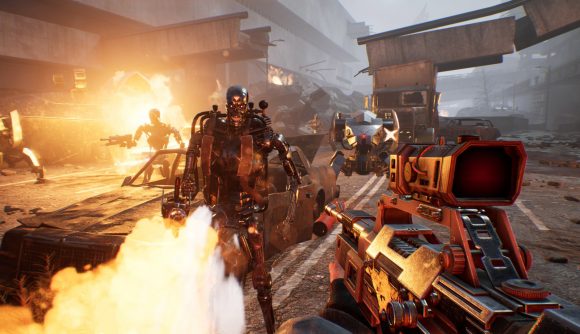 Suddenly, it seems as though there are Terminators everywhere. In the run-up to the premiere of Terminator: Dark Fate, there’s been a lot of Terminator cross-licensing going on in games. Terminators (and Sarah Conor) have showed up in Gears 5, there are hints of a crossover in Ghost Recon: Breakpoint, and possibly even appearances in Mortal Kombat 11. Next month, the franchise gets its own game in Terminator: Resistance.

More worrisome, though, is the fact that Resistance has been developed by Teyon, the studio behind Rambo The Video Game: Baker Team, which was an on-rails Rambo shooter that was not particularly excellent, shall we say.

So, not a lot of action movie running and gunning at all, really. The video appears to have been captured from Access Playstation’s livestream and reuploaded, which explains the somewhat muddy quality.

Here’s the thing, though. I’m actually pretty interested in seeing what they do with this. The whole thing about Terminators is that normal human beings are absolutely no match for them, even the clunky, skeletal T-800s. And so it makes a lot of in-universe sense that you’re not going to be gunning them down with a piddly little M-16.

I’m not completely sold on the Frogger-style hacking minigame, but that’s not an egregious sin. It’s more the fact that sneaking around can be a bit of a drag in a game about collecting and leveling up weapons.

But hey, on the other hand, it worked great for Alien: Isolation.

Either way, we’ll find out more when Terminator: Resistance launches November 15 on Steam.