Who are the Terraria bosses? Bosses in Terraria come in all shapes and sizes, but all of them take a little extra firepower and patience to take down.

Defeating Terraria bosses has its benefits, from receiving items, upgrades, equipment, and materials, to also progressing the game and leveling up. Hardmode bosses are a lot, er, harder to take down than the bosses you’ll encounter on your first playthrough, so you’ll need to really know each bosses weak points and do some prep work before taking on these Terraria bosses. 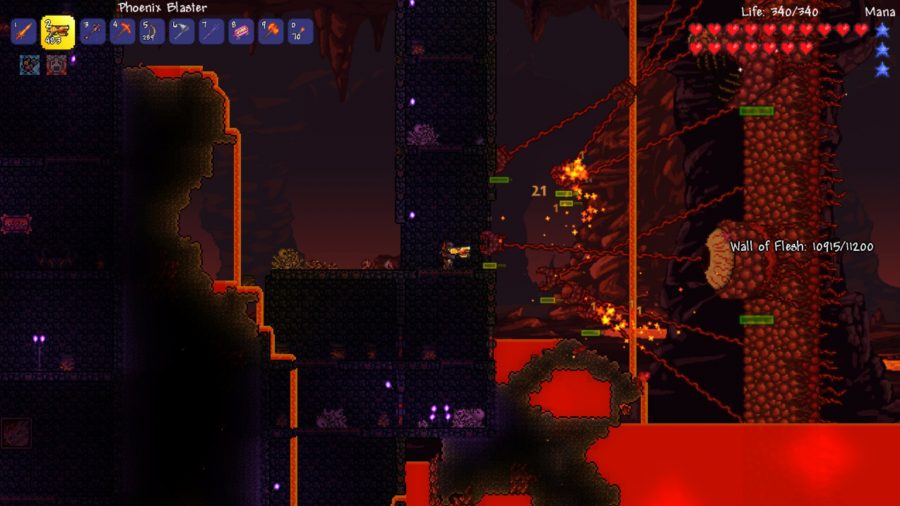 This bouncy blob of blue can be summoned using a Slime Crown, or once you’ve killed 150 slimes during a slime rain (a random event where slimes fall from the sky). It’s pretty easy to defeat and a good beginner challenge.

If you have over 200 HP and at least 10 defense, and you’ve got three NPCs all living in Terraria housing, then there’s a one in three chance of this boss spawning at the beginning of each night cycle. It can also be summoned at night using a Suspicious Looking Eye.

The Eater of Worlds is only found in worlds with corruption chasms (an evil biome). It will naturally appear after every third Shadow Orb is broken, or when Worm Food is used.

It’s a challenging foe for even the more experienced players, so proceed with caution. We suggest coming armed with piercing weapons and aiming for the head and tail first to avoid them splitting into multiple worms.

If the eye wasn’t enough, then this floating monstrosity will appear after every third Crimson Heart is broken, or after using a Bloody Spine – very apt. It comes with an army of creepers and two attack types, but has fairly low HP, making this a nice challenge for beginners. This Terraria boss can only be found in worlds containing the crimson biome.

To locate the queen of bees, simply destroy it’s larva, which can be found in beehives in the underground jungle. You can also summon a Queen Bee by using Abeemination anywhere in the jungle biome.

You’ll need to defeat Skeletron to access the Dungeon, especially if you want to get your hands on an alchemy table to craft potions. Skeletron is a formidable foe, and must be killed before the night is up, otherwise it will kill you in one swift swipe.

The Wall of Flesh, is, well, a wall of flesh – with two lazer-firing eyes and a mouth full of sharp teeth. Oh, and it burps hostile leeches. You can summon it by throwing a Guide Voodoo Doll into a pool of lava. It’s a tough boss to beat and is the final pre-hardmode boss. Once successfully defeated, hardmode will be enabled in the world and you can move on to tougher boss battles – yay! 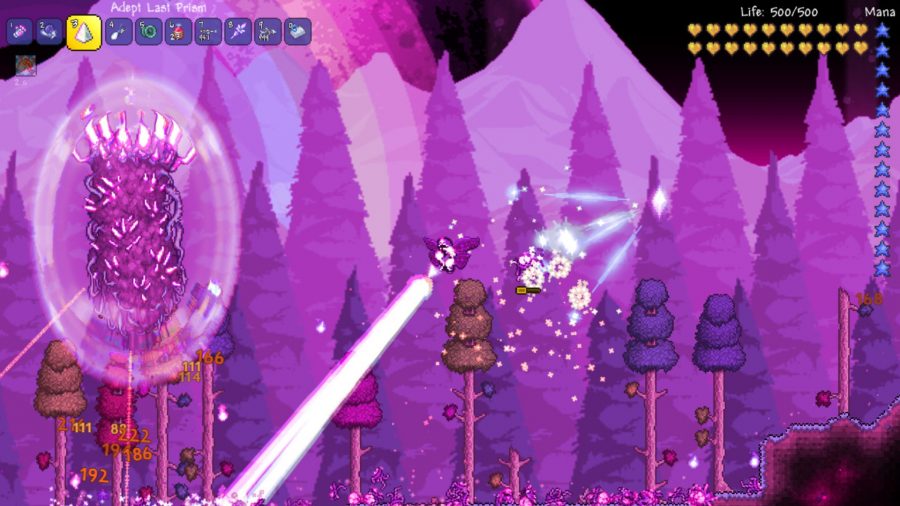 This optional boss fight is a good intro into hardmode bosses and will be one of the first bosses you encounter. It’s a tougher version of King Slime and can be summoned from destroying Gelatin Crystals in the underground hallow.

You’ll recognise this duo from the pre-hardmode boss Eye of Cthulhu, instead there’s now double the trouble and The Twins can be summoned using a Mechanical Eye at night time. Both eyes have different HP and fighting styles, so watch out for Spazmatism’s flames and body slams, and Retinazer’s deadly lasers. If you want some ideas on the class builds to take on these hardmode bosses, check out the best armor and accessories for each class in Terraria.

Although this boss is considered one of the easiest hardmode Terraria bosses, it can still provide quite the challenge as it shoots lethal lasers in rapid succession at players. To summon The Destroyer, use a Mechanical Worm anywhere in the world at night.

Skeletron Prime ramps up the difficulty from his predecessor Skeletron, with a lot more HP to contend with, as well as a laser gun, saw, and cannon to avoid in battle. Again, make sure you kill Skeletron Prime before sunrise, otherwise he’ll kill you in one blow. You can summon him by using a Mechanical Skull and he can be summoned anywhere at night.

You can summon Plantera by destroying a Plantera’s Bulb in the underground jungle after defeating the mechanical bosses, which are The Twins, Skeletron Prime, and The Destroyer.

With a whopping 70,000 HP, this optional boss is one of the toughest hardmode Terraria bosses you’ll face. It can be summoned by killing the Prismatic Lacewing, a flying butterfly-like creature that spawns in the hallow at night after defeating Plantera.

You’ll come face to face with Golem in the Jungle Temple by using a Lihzahrd Power Cell at the Lihzahrd Altar. You’ll need to defeat Plantera first to gain access to the Jungle Temple. Golem’s attacks are similar to Skeletron, as it detaches parts and shoots ranged attacks.

You can summon Duke Fishron by using a Truffle Worm as bait with a high-powered fishing rod in an ocean biome. He has a staggering 50,000 health and 50 defense and will ram the player and fire explosive bubbles and flying sharks as projectiles.

Once you’ve taken out Golem, the Lunatic Cultist spawns outside the dungeon and can only be summoned once all four cultists have been killed. It’s a difficult boss to predict in battle, with random flight movements and cycling elemental attacks.

The final boss is a treasure trove of endgame items. You can summon him by defeating all four celestial towers from the lunar events, or using a Celestial Sigil. His total health is 145,000 and he’s by far the most difficult Terraria boss you’ll face. With multiple eyes that must be destroyed at various stages, this Terraria boss takes a lot of patience to avoid deadly laser attacks from all three of Moon Lord’s eyes.

That’s how to spawn, summon, and defeat all the Terraria bosses. The Terraria Journey’s End update is now available for Terraria players, adding in more enemies to one of the best crafting games on PC.