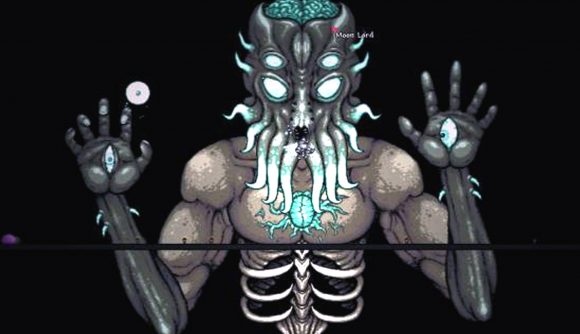 A player has beaten the toughest Terraria hard mode difficulty in a one-HP run with no dodges, making us all look bad. The player took on the survival game‘s Journey mode For the Worthy in master mode with a slim chance of victory, and yet made it all the way through and defeated the final Terraria boss.

It’s nearly eleven years since Terraria released and players are still finding new challenges to take up, even with the absence of Terraria 2 news. A previous game update introduced the ‘For the Worthy’ world with increased difficulty, which then can, in turn, be played on ‘Master’ level and then Journey mode – all of which together create a near-impossible Terraria challenge.

Well, Reddit user the_true_lazyguy clearly laughs in the face of impossibility, as they also added a few Terraria mods to give them just one HP of health and removed the ability to dodge hits with items like Hallowed armour and Black Belt. Then, with all this in place, they went and “finally” beat the game. Somehow.

You can check out their tense battle with the Moon Lord boss in the video below. Impressive stuff.

For the best Terraria wings and how to get them, you can follow the link right there.