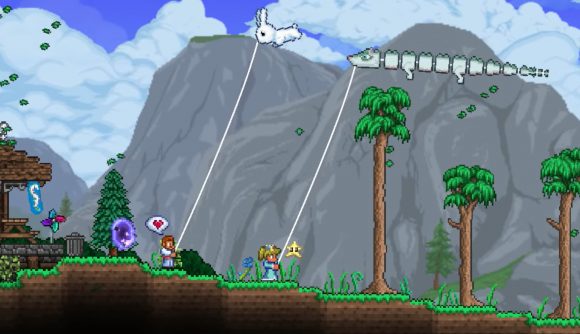 Now that Terraria: Journey’s End is at last here, it seems a pretty eye watering number of players have been jumping into the game of late. In the last 30 days, the sandbox game’s seen an enormous upsurge in both average and peak player counts, smashing its own records for both – and it’s now become the fourth most-played game on Steam.

That’s according to Terraria’s Steam Charts page, which shows the action-adventure game’s peak player count has stormed to a whopping 489.9k in the last month, miles ahead of the figures it usually sees in the roughly 25-72k region. That figure was posted on May 16, the Journey’s End launch date, according to the site’s graph, though it’s seen peak counts into the hundreds of thousands pretty much every day since.

Similarly, the record for the average Terraria player count has also been blown away over the last 30 days, with an all-new high of just under 116k players. For context, the previous record was April this year, which saw less than half this (51.3k), and before that, average numbers were quite a lot lower.

Head to the Steam most-played lists on both Steam Charts and SteamDB (by all-time peak player records) and you’ll see, as of this story, it’s in the number four slot, sitting only below PUBG, CS:GO, and Dota 2. Phwoar.

If you’re keen to join the fun, here’s everything you might want to know about Terraria: Journey’s End before heading in. We also have some handy guides to Terraria bosses, the Terraria potions and alchemy table, and Terraria house designs, which might prove useful – go take a look.