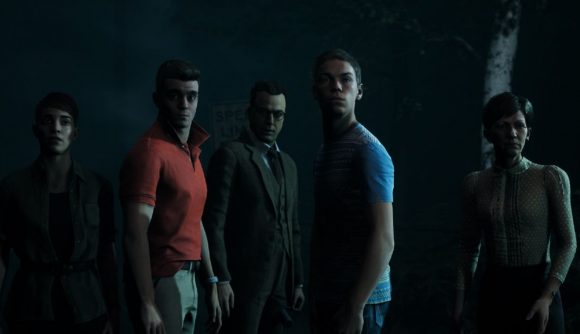 If you go into the woods today, you’re sure of a big surprise – like the new gameplay trailer for The Dark Pictures: Little Hope. Developer Supermassive Games has shared seven minutes of the horror game, revealing a little fog, some ominous symbols, and a taste of how the story’s three timelines will intertwine.

The footage begins with a group of characters needing to head into Little Hope for some assistance. Will Poulter’s Andrew and Ellen David’s Angela fall behind, getting lost in some sudden fog, and things only get weirder from there. Strange shapes made out of wood and rocks start appearing along the road, leading to a jump-scare that brings Andrew and Angela face-to-face with Mary, the little dancing girl as seen in previous trailers. Mary’s a young witch from 1692, the year of the Salem witch trials and the second of three timelines in the game, and the exchange between the three ends as a hooded woman storms off accusing Mary of witchcraft.

The conversation tree follows much the same structure as The Dark Pictures: Man of Medan, meaning there’s two-to-three responses each time, allowing a selection of emotions and reactions. What’s more interesting here is the active camera – players a much larger space to move it around while controlling Andrew. Supermassive CEO Pete Samuels had commented previously this is based on players wanting more control. “We have added a new camera system which allows players in certain levels to have full 360 degree control of the camera,” Sandoval told GamesRadar. “Naturally this brought new challenges, but we believe this makes the playing experience a better one.”

The Dark Pictures: Little Hope is a follow-up to 2019’s Man of Medan, and is the second in a planned eight episodes of the anthology series. You can watch the full trailer below – be warned, there’s a jump-scare around the 6:20 mark:

Still no release date beyond summer 2020, so hopefully we’ll know more soon. You can check out the best zombie games and best story games in the meantime, and you might get some of them super cheap right now in the Steam summer sale.