Saturday Night Live poked some playful fun at The Division 2 last week, and it seems Ubisoft enjoyed the bit as much as everyone else. The skit takes down overly chatty NPCs, Ubisoft shouts out SNL to say “You’ll be happy to know that Damien and Ethan are now less chatty with our Invasion update. All hashed out!”

The Invasion update – which brought us the Tidal Basin stronghold – Ubisoft references on Twitter actually went live the Friday before that episode of SNL. In the patch notes on Reddit, it seems SNL’s criticisms had already been addressed. “Hey agent! Staff in the Base of Operation will now shout at the player less frequently than before.”

While the game in the skit is the fictional ‘Earth War 3’ and is purportedly about a zombie invasion, it’s pretty obviously a reference to The Division 2. Once Pete Davidson straps on the HTC Vive, he finds himself in a safehouse, where he’s greeted by a gruff-voiced fellow named Damian, played by Game of Thrones’ Kit Harington.

Damian explains that the safehouse is where you can “upgrade gear and check progress,” but first Davidson has to reach reach the weapons room, where he plans to get “the biggest gun they have.” It’s all done with The Division-style HUD elements and objective markers, and with the same super-serious tone you generally find in Tom Clancy games. Even the ‘NPCs’ badges look inspired by The Division’s iconography.

Unfortunately, Davidson is stymied at each step by another annoying conversation. Even though there’s a button to push to skip through dialog, he finds himself being pulled into the toxic office dynamics of an Earth War 3 safehouse, and eventually abandons his quest to get a weapon before venturing out into the zombie-infested city. 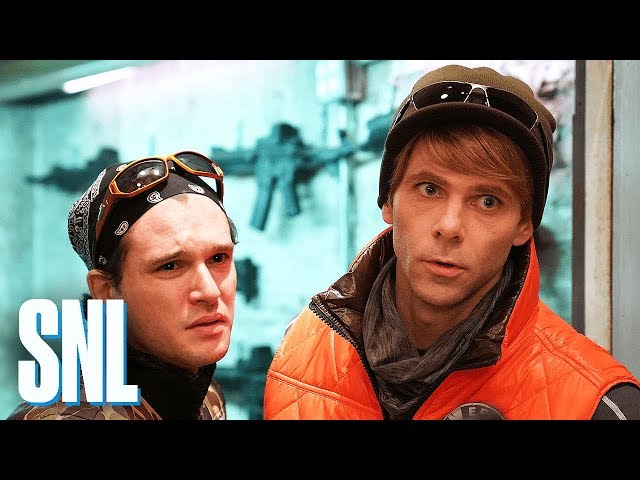 I’ve found SNL to be pretty skippable itself for the past decade or so, and I wasn’t expecting much when a friend told me they’d had a skit about The Division 2. But I thought this one managed to hit a lot the right notes – even if it’s not guffaw-level hilarious, the skit definitely is familiar with its subject matter.

Read more: Our guide to The Division 2 exotic weapons

Ethan, the other NPC featured in the skit, introduces the game’s mission hub – or rather, what will be the mission hub, once he gets done setting it up. It’s pretty clear the SNL writers have been spending some time getting settlements online in DC, and the slightly odd word choice indicates they’ve also completed a lot of videogame tutorials.

One note, though: Davidson probably should use the wrist straps on those Vive controllers in the future – just saying.