October 31, 2019 The speedrunner has now beaten his own time by ten minutes.

Obsidian’s new retro-futurist RPG The Outer Worlds only arrived October 25, but one determined player has already completed an impressively speedy speedrun of it. If you’re wondering how long The Outer Worlds is, we recently estimated that it was around 25-30 hours for a more thorough playthrough, and approximately 15 hours for a quicker whip through. Earlier this week a player finished it in under 31 minutes. Now, he’s done it in just over 21, setting a new world record.

Regular videogame speedrunner It’s Jabo has uploaded a video of his The Outer Worlds speedrun on YouTube (which you can check out below), posting a rapid finish time of just 21:39. According to Speedrun.com, that’s now the reigning world record time, at the time of writing.

The user explains in the description that it’s an ‘any% speedrun’ which means completing it in the fastest time possible with any percentage of completion at the end, rather than the more mightily meaty pursuit of a 100% completion. Polishing off all those side quests and unlocking all the Outer Worlds perks would probably take a bit longer.

In the video you can see the player sprinting and blasting his way through the game’s main storyline, encountering a few enemies determined to slow him down, but he easily takes them down or escapes in time to make a sub-22 minute finish.

It’s Jabo says that he improved on his original time posted earlier this week (30:54) by using a new route designed by super speedy speedrunner Sharo, which helps him “hand over Welles to the Board, giving us earlier access to Monarch – which in return gives us access to the Hope ship earlier.” He says this helps cut around two minutes from the run through. 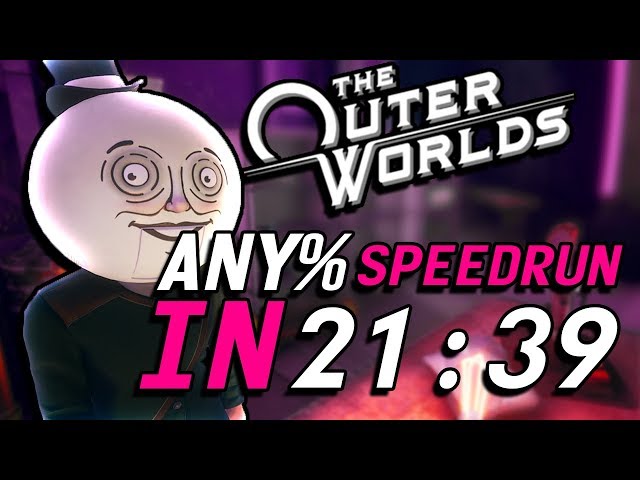 It also appears that It’s Jabo will be looking to beat his time again soon – he says in the description that faster runs are one the way soon. Apart from the fact that he’s already brought his time down by ten minutes, according to his Twitch page, he’s also posted some very quick speedruns of Fallouts 3, New Vegas, and 4, so it looks like he could well bring that time down again very soon.