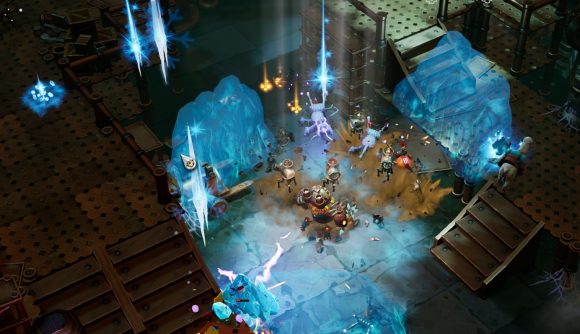 When Torchlight III launched a couple months ago in Steam Early Access, one of the new twists it offered players was an equippable subclass. Relics, as they were called, were items you could give your character, which would level up and provide additional combat skills. Those are going away, though – after collecting feedback from players, developer Echtra Games decided to take an axe to the RPG game‘s relic system and rebuild it, almost from scratch.

“Unfortunately, the initial design of relics – although a very fun and entertaining concept – didn’t quite hit the mark,” says Tyler Thompson, Echtra co-founder and Torchlight III project lead. “Its flexibility, while well-meaning, left holes that allowed players to use completely leveled relic weapons on level one characters, or accidentally delete a high level relic altogether by trashing a character that was no longer wanted. They were also hard to surface, not immediately unlockable, and required a lot of investment to really understand and try different variations of.”

Relics, which you’d craft at a special table called the Reliquary in your fort, came in four flavours: the poisonous Bane relic, the Coldheart relic, the Flaming Destroyer relic, and the Electrode relic.

These had ultimate-like abilities that were activated with a hotkey, and accumulated experience and levels with each use. You could swap them out at your fort, where all your characters can trade gear.

Thompson says that’s all going away in the new system. Instead of crafting and equipping your relic, you’ll be picking one and sticking with that during character creation. Essentially, you’re picking a third, permanent skill tree when you roll your character, making relics a more integral part of your character.

“Because this choice is made when you create a character, it provides a set amount of options that your character can really excel at, which in turn makes class builds feel unique and distinctive,” Thompson explains. “You will now see class builds that are specifically designed for a particular combat style. After we previewed the relic subclass update on our stream, we’ve already seen the community coin phrases for theoretical class builds.” An example? A Railmaster with the bane relic is known as ‘The Bane Train.’ 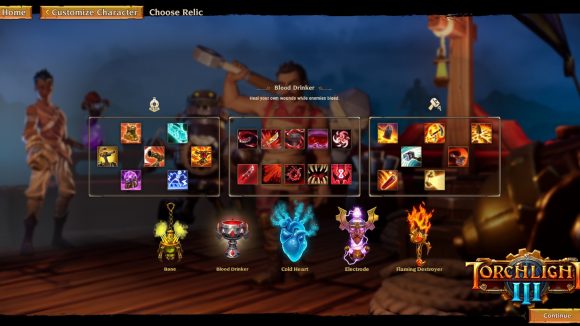 Effectively, what that means is that – depending on how you look at it – the new relic system gives Torchlight III either 20 character classes, or four base classes with access to 20 more active and passive skills, Thompson says. “Either way, that’s a lot more options for making a unique build.”

A new relic class, Blood Drinker, joins the four mentioned above. Characters with the Blood Drinker subclass can use its special abilities to heal their own wounds while causing bleeding to nearby enemies – which means you’ll be able to play as a vampire robot next time you fire up Torchlight III.

Players who tried out the original relic system are getting something to remember it by: the Reliquary they built in their fort is becoming an exclusive decorative item, only available if you’ve played Torchlight III while it’s in Early Access.

Torchlight III’s final area was added June 30, completing its story campaign. Development has moved along at a rapid pace, with updates coming out weekly. We asked Thompson if the experience had been a stressful one.

“Yes, it is very stressful, especially coming out of a rough initial Early Access launch on Steam,” he says. “However, given all the things happening in the world, we feel very lucky to be able to make games in a supportive team and company environment. Our team is a bunch of heroes. We all really want the game to succeed and to be able to support it long into the future, and we’re really determined to make that happen.”