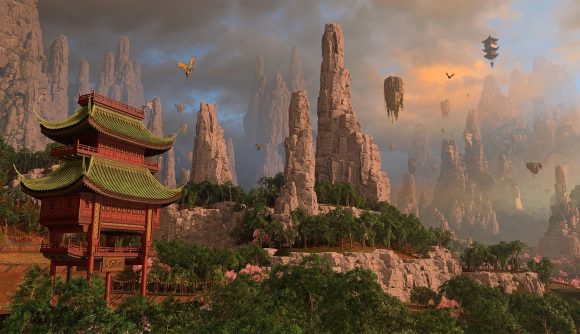 Total War: Warhammer III introduces the eastern empire of Grand Cathay to the strategy game’s expanding roster of factions, and developer Creative Assembly has now revealed some fresh new details about how its campaign gameplay will work. As a Cathayan leader, you’ll be focused primarily on two things: maintaining a harmonious balance within the empire, and making sure the indomitable Great Bastion in the north remains intact.

As the latest Total War blog post explains, Grand Cathay players will always need to be mindful of balance – and to help with that, they’ll have a big bar at the top of the screen. Each time they pick a lord, construct a building, or research a new tech, the point they’re at on the balance bar will shift slightly.

Keeping it close to or at the centre results in special bonuses, such as the ability to call on ancient ancestor spirits to help out on the battlefield. But since nearly every decision you make influences that balance, it’s going to be awfully tricky to maintain for more than a couple of turns.

The imposing wall on the northern edge of Cathayan territory is called the Great Bastion, and it plays an important role in Grand Cathay campaigns. This is particularly true for players starting as Miao Ying, as her territory is in the north along the Bastion, but Creative Assembly explains that the wall’s wellbeing matters to every Cathayan leader.

Another meter at the top of the screen in Warhammer III tracks the mounting threat from Chaos forces, which are marshalling armies to breach the wall and run rampant through the empire. Defeating Chaos armies and building up defences will help keep that threat low, and the Celestial Dragon Empire rewards commanders who prioritise this.

Grand Cathay factions may also take advantage of the Ivory Road trading system. Total War games typically handle trade off-map, with negotiations between factions taken care of in menus. Grand Cathay players, however, will be able to send caravan units out across the map to earn large sums of gold. While they won’t have direct control over the caravans, they’ll be able to guide them by making decisions at key points along their journeys. The caravans, meanwhile, have map vision like armies, and so they’ll be valuable sources of map intelligence while they’re active.

How does it feel leading Grand Cathay in Total War: WARHAMMER III?

From Harmony to the Wu-Xing Compass and the Ivory Road, we've covered Grand Cathay's main mechanics to learn how they play.

Finally, Grand Cathay factions will have to manage the Wu-Xing Compass, a magical dial located in the city of Wei-Jin. The compass’ needle can be pointed toward any of four regions on the map, and players will get various passive and active bonuses depending on which region they select on the compass. The longer the needle stays pointing in one direction, the more magical energy builds up, and the stronger those buffs become.

The Total War: Warhammer III release date has been pushed back until early next year, but we’re still getting pretty excited about taking to the field as a Grand Cathayan lord. We’ve recently gotten loads more Grand Cathay lore from Total Warhammer III’s lead writer, and it sounds like sieges are going to be much more interesting this time out.