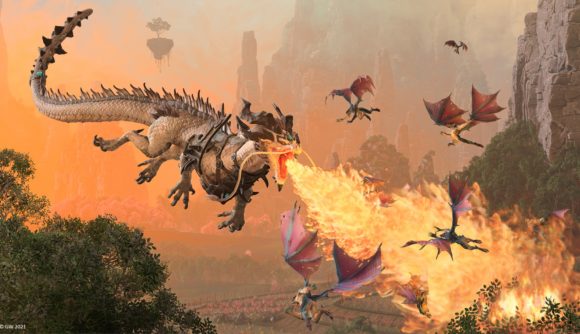 When Total War: Warhammer III launches early next year, it’ll introduce the faction of Grand Cathay along with the daemons of Chaos. Team Big and Red has gotten a lot of screen time in the trailers and teasers we’ve seen for the strategy game to date, but lately Creative Assembly has been providing more details on Cathay. Now, the studio has introduced the nation’s launch-day legendary lords, a pair of celestial demi-gods named Miao Ying and Zhao Ming.

Miao Ying and Zhao Ming are sister and brother, the children of the Celestial Dragon Emperor. As such, they’re both literal dragons themselves, capable of switching between dragon and human forms as the situation requires. Miao Ying, the Storm Dragon, is the Emperor’s eldest child, and she rules Nan-Gau at the western edge of the Great Bastion in northern Cathay. Known as the City of Smoke, Nan-Gau is an industrial center where Cathay’s great weapons of war are forged and smithed.

Her brother Zhao Ming is known as the Iron Dragon, and from his powerful city of Shang-Yang, he rules Cathay’s western reaches. As Total War: Warhammer III’s campaign begins, Zhao Ming is a bit surrounded. Unlike his sister, whose primary concern is the daemons threatening her from the northern wastes, Zhao Ying’s borders are threatened by unruly mobs of Skaven, Greenskins, Ogres, and others – but his status as a dragon may afford him the opportunity to use these factions to his advantage.

The latest lore post from Creative Assembly hints that Zhao Ming is rumoured to have been tainted by the warpstone that fascinates the Skaven. It’s enough that his dragon siblings regard him as a bit of a black sheep in the family, although it’s said that the Moon Empress has always had a soft spot for her wayward son.

Whichever legendary lord you pick as Cathay, it sounds as though there will be plenty to manage both domestically and abroad when the campaign kicks off in earnest.