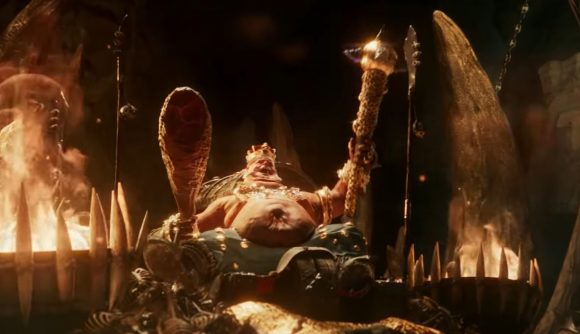 In certain key ways, the Ogre Kingdoms will be Total War: Warhammer III’s most relatable faction: specifically, their main concern at any time is what’s for lunch. The Ogre Kingdoms, as has been theorised for some time, are the early-adopter bonus for players who pre-order Total War: Warhammer III, and developer Creative Assembly has now shed light on how these hungry lads will work on the campaign map.

The Ogre Kingdoms will have two legendary lords at launch, Greasus Goldtooth and Skrag the Slaughterer. The latest post on the Total War blog doesn’t get into their specific campaign details, but instead discusses how ogres work generally. They’re structured similarly to a horde faction, with camps that can be placed just about anywhere an ogre army can reach, and they run on meat – which can be obtained in a number of ways, all unpleasant.

Camps work as the ogres’ major settlements, and you can place them anywhere that’s far enough away from an existing settlement. That includes enemy territory, mind you – any ogre camp set up in enemy-controlled territory automatically begins raiding that province with whatever is in its garrison.

You can recruit ogre units directly into the camp garrison, and trade units into and out of that garrison from nearby armies as usual. Another nice touch for ogre players is that whenever they’re within a camp’s sphere of influence, they can use local recruiting – even if the camp is in someone else’s province.

All ogre units need meat as a second kind of upkeep from their usual per-turn cost in gold, although when an army is near a camp, that cost is waived. If you’ve got a meat surplus, your ogre armies can hold a pre-battle feast that will buff units for the coming fight, or use it as sacrifice to the Great Maw for additional multi-turn bonuses.

While the Ogre Kingdoms’ legendary lords will have their own unique campaign goals (and Creative Assembly says their campaigns are very distinct from each other), all ogre players will periodically get a choice of three contracts to accept, offered by any of the other AI factions in the game. Ogres tend to be mercenaries, and can take on contracts to kill specific characters, sieging cities, and taking out bothersome armies.

This makes ogre diplomacy a pretty freewheeling affair, as they’re willing and able to declare war on or work with just about anyone on the map – including the daemons of Chaos. We’ll be ready to chow down when the Total War: Warhammer III release date arrives in February.