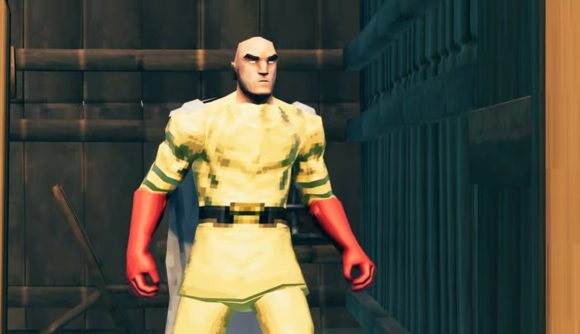 A pair of Valheim players have turned it from a Viking game to an anime game, by recreating One-Punch Man, superpowers, costume, and all. The mod is demonstrated in a clever mock-up that recreates an episode of the show in the survival game.

In a video titled ‘I best every boss in Valheim with one punch’, the origins of Saitama, One-Punch Man’s titular, er, one punch man, are retold as a way to bulk up after dying one too many times. Following Saitama’s rigourous workout regime – and shaving their head and making up a bright yellow costume – the Viking is now able to plough through any enemy using a single right hook. And fly around, too.

Every boss is then destroyed using a single strike. The creators, The Grumpy Spanner, provide an inner-monologue, like the anime series, and Viking Saitama carries himself just as he does in the show, forever inconvenienced by invading monsters. You can find the mod yourself on Nexus, it’s a simple texture replacement for the troll armour. You’ll need BepinEX first, and the custom textures mod, to implement it.

Valheim fans are nothing if not creative. One’s building Castle Fairfax from Fable 2, another just made World of Warcraft’s Northrend. Someone else built the Millennium Falcon from Star Wars. Long may such cool things manifest.