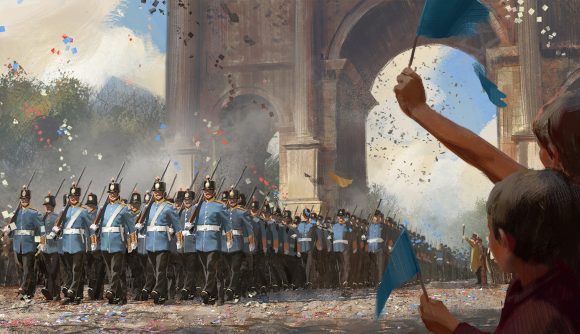 Victoria 3 is charting a new course in Paradox’s grand strategy game space, and its wholly new vision for warfare may be among the most impactful changes on the way. In the latest dev diary, Paradox goes into some additional detail on how this new system is going to keep war interesting and challenging, without actually having you moving little unit counters around the map.

What’s perhaps most fascinating about this week’s dev diary is its revelations into how Victoria 3 will be treating your military. There are several key components to an army in Victoria 3, and each of them plug into other aspects of the game. Generals, for example, are political individuals who represent certain interest groups, using influence to lend clout to their chosen causes. Your armies will draw from local resources, the flow of which are governed by your infrastructure and production base.

Like other Pops, servicemen and officers work in buildings – specifically, barracks and conscription centres. These buildings produce battalions, which are Victoria 3’s basic military unit, consuming resources that depend on things like your Army Model Law and the technology used in your military. Since they use the same logic as every other production facility, they’ll be impacted by factors like market access and the availability of finished goods across your economy.

Wars take place along fronts, which are established when you start a diplomatic play. During that process, you’ll have the option to begin mobilising generals, and this introduces another interesting wrinkle into Victoria 3’s diplomatic game. Mobilising right off the bat will signal to the other side that you don’t expect a peaceful outcome, and can lead to escalation.

Huzzah! Another Dev Diary has arrived! This week we dig into the core mechanics of land warfare, including Fronts, Generals, Battalions, Mobilization, and more. Read it here: https://t.co/nHpJmLXfxj pic.twitter.com/lR9bDYWDlq

Waiting to mobilise until late in the negotiation process, on the other hand, might show good faith and – perhaps more importantly – save you a lot of money. One of Victoria 3’s design pillars for warfare this time around was to make war costly, and that cost can skyrocket significantly if you haven’t planned things well. Mobilised generals will require adequate men and weapons, and if there are kinks in your supply lines, the increased demand will send prices soaring – just the way they’ve done with the best graphics cards at the moment.

The developers also say that winning a war isn’t simply a matter of ‘doomstacking’ troops: generals have traits that confer bonuses to their battalions, and armies can be concentrated along a short front or spread out along a large one. All these factors will play into how battles and, ultimately, the war itself unfold.

Paradox says next week’s diary will get into how navies work, as well as some of the nitty-gritty on warfare mechanics themselves. The Victoria 3 release date has yet to be announced.