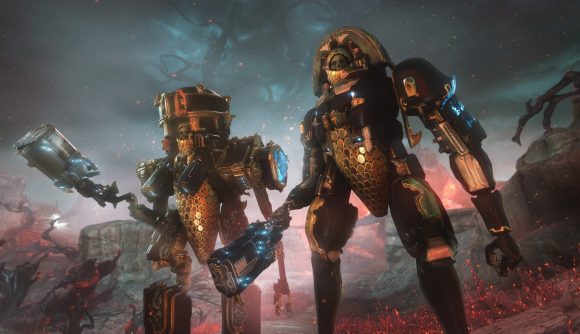 Early on in Warframe‘s upcoming Heart of Deimos expansion, you’ll be warned about the Necramechs – the ones left on the infested Martian moon of Deimos have reverted to their “autonomous kill precepts” and will attack you on sight. Fortunately, these hulking biological mechs aren’t all bad – you’ll be able to pilot your very own as you make your way through the Heart of Deimos story missions.

Once acquired, your Necramech will function similarly to your Archwing unit – you’ll be able to customise and upgrade it on its own loadout screen in your Orbiter. Plus, you’ll be able to call on it any time you’re in an open world area – whether that’s the new Cambion Drift area on Deimos, or the Plains of Eidolon or Orb Vallis open world zones already present in Warframe.

Developer Digital Extremes says it doesn’t want to give too much away about the backstory of the Necramechs just yet – you’ll have to learn about that by playing through the story. But what we saw in the keynote presentation at TennoCon 2020 makes us eager to hop aboard one of these fleshy Gundam units ourselves.

As with most of Deimos, the Necramechs have a rotting, biological aesthetic and sport skulls and ancient armour. Each different model has its own unique abilities, and you’ll be able to customise your loadout as you see fit. The model we saw Warframe live operations director Rebecca Ford show off in the TennoCon demo was outfitted with artillery on its arms, allowing Ford to lob blue ordnance up and over a ridge – or directly into the faces of some giant centipedes that got a bit too friendly.

The Heart of Deimos release date is set for August 25, and you’ll be able to play it on all platforms at launch.