Warframe’s upcoming Railjack expansion is about pulling all of Warframe’s various elements together and connecting them by means of massive capital ships you can fly and customize. That’s going to come with new challenges for players, including putting out fires that break out on board your ship.

Digital Extremes’ Warframe development team sat down Friday for one of their regular update streams, and they shared some new details about Railjack. A piece of concept art showed a shipboard fire extinguisher – stylized to fit nicely into the organic look of Warframe’s Tenno armors.
“It’s a bit FTL, in that way that you need to manage the ship and its structural integrity, as well as flying it and manning the turrets,” said creative director Steve Sinclair.

FTL, of course, had us scrambling to manage multiple ship systems at a time, but from a top-down viewpoint in a pausable game. That kind of management is going to be a different proposition in Warframe’s tight third-person perspective, but it emphasizes the importance Railjack is placing on team cooperation. 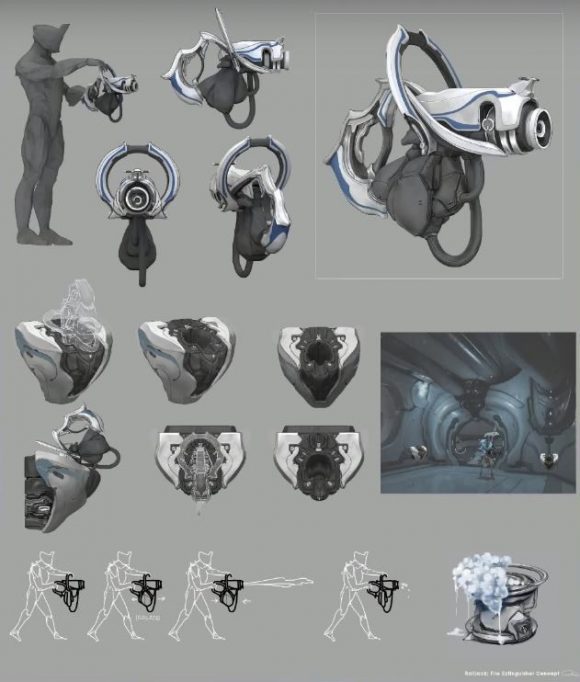 As we’ve reported here before, Railjack is going to be a pretty big change to Warframe, and Sinclair emphasized that point during the stream.

“One of the cool things about our intentions with Railjack is, some people might have gotten the impression that Railjack was a little mini-mission connected to Fortuna, but no,” he said. “It’s going to be a whole new way to play Warframe, and it’s going to tie disparate elements of Warframe – on foot, Archwing, space battles – it’s going to try to take all of those and make them fit seamlessly together like we showed at TennoCon. So it’s not one spot, it’s going to be mission types.”

We expect to see Railjack go live in Warframe by the end of next year.