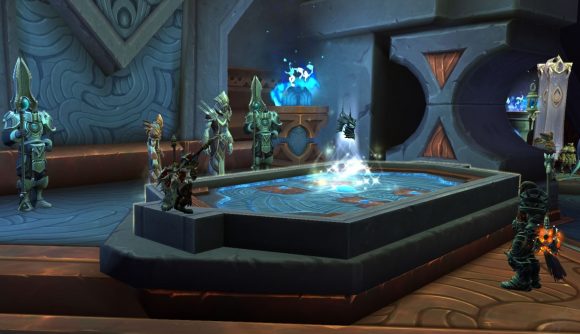 Picking a covenant to join in World of Warcraft’s Shadowlands expansion has been an important choice: changing to a new one meant going through a weeks-long series of quests. Blizzard’s lifting those restrictions in the MMORPG’s 9.1.5 patch, due out November 2, in part because of how players have changed their behaviour and expectations throughout WoW’s 17-year lifespan.

“From the outset of Shadowlands, we set that [selection of covenants] up as a pretty heavy choice,” game director Ion Hazzikostas tells us. “Once you picked a covenant, you could only switch to another one by going through a questline to atone or rejoin the covenant that you had once left. We’ve heard a lot from players over the last year that that was limiting their ability to play the way they prefer to.”

Costs like the lengthy questline, or the old gold price tag for fiddling with talent points in the original game, were deliberate uses of friction meant to add weight to a role-playing decision, Hazzikostas explains. But increasingly, Blizzard has found that isn’t how players approach World of Warcraft anymore.

“I think something that was really eye-opening was looking at how WoW Classic and Burning Crusade unfolded, where that exact same design plays out totally differently in 2019,” Hazzikostas says. “Turns out, people respec back and forth all the time, and they just spend more time grinding and farming gold in the efficient, known spots.”

Originally, he explains, the intent was never to force players into permanent decisions that they might come to regret later – there were always options for if you changed your mind at some point down the road. However, once you’d decided on a build or speciality, Blizzard felt you shouldn’t be moving back and forth all that much.

“Modern players, frankly, increasingly aren’t up for that,” Hazzikostas says. “What they end up doing is looking at friction and saying, ‘Well, I’m going to do this anyway. And now you’re forcing me to do something really un-fun to enjoy the game the way I want to enjoy the game.”

During the development of patch 9.1.5, Hazzikostas says the WoW team has “taken a step back” and reexamined many of the baked-in assumptions that underpin the game’s core design decisions.

“For many years, we just kind of clung to [the idea that] this is the DNA of our game, this is what our forebears who trained us as designers taught us, and we’re going to carry this forward,” he says. But watching modern players approach the original version of WoW in a very different way was a watershed moment, and gave the design team an opportunity to rethink some of those lessons.

“That’s what’s led to loosening some of these restrictions, to faster catch-up, or ease of alting, switching between characters as more and more people want to do,” Hazzikostas tells us. “As WoW is in its seventeenth year, players are different today than they were. We need to meet them where they are.”

Patch 9.1.5 comes out November 2, and when it does, you’ll be able to move between covenants at will once you hit level 80.