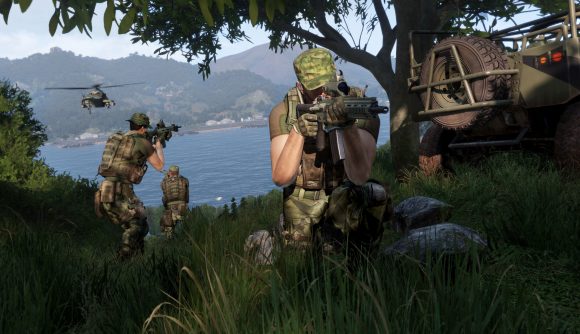 If you’re wondering what to get in the Steam Summer sale, Arma 3 might be a good option. Bohemia Interactive has assembled a new bundle of Arma products into what they’re calling the Arma 3 Ultimate Edition, and it’s on sale now.

The Arma 3 Ultimate Edition is Arma 3 and every piece of DLC Bohemia has put out for it. That includes the all-important Apex expansion, all the vehicle DLCs, the Tac-Ops and Laws of War expansions, Marksmen, and even the new Contact DLC that throws a whole new X-Files spin on Arma’s true-to-life military simulation.

Arma 3 is getting a bit rusty around the edges, but make no mistake: it’s still a terrific military sim and this package is a massive amount of content. For single-player enthusiasts, there are multiple campaigns here, and the multiplayer scene around Arma 3 is still thriving.

That’s largely thanks to the work of a throng of modders, who have been adding to Arma 3 since the day it launched. Steam Workshop is integrated into the game’s front-end, so adding and organizing mods is easy to do. That scene is still thriving too, but even without mods, Arma is massively customizable and lets you set up whatever kinds of combat scenarios you can imagine – as long as you’re willing to put the time in to learn how to use it.

True to life: The best simulation games on PC

At any rate, this is everything that’s come out for the game, and it’s never been cheaper to buy. If you’ve ever been even a little curious about Arma 3, now’s the perfect time to pick it up. The best part is that if you already own the base game and a few DLCs, Steam will still slap on the bundle discount on the rest of the package for you, so you don’t need to re-purchase anything to save.

And hey, it’s way too hot outside anyway. Stay inside and play soldiers.