Asus has a knack for making quality gaming cans, with its wired TUF Gaming H3 being our choice for the best gaming headset if you're on a budget. The premium-feel of the original surprised us at its £49 price tag, and this luxury has been amplified by cutting the cord with the updated TUF Gaming H3 Wireless.

Coming in at £89 – almost double the price of the original – is this PC, PlayStation, Nintendo Switch, and mobile-compatible pair worth the extra cost? It really depends on where and how you use it.

Take the H3 Wireless out of the box and you'll find a USB Type-C cable for recharging, plus the USB Type-C 2.4GHz wireless adapter. This connection keeps the low-latency of the wired model, buit makes it that little bit easier to manage cables in your setup. Don't worry if your PC's lacking a Type-C Port – a USB 3.0 adapter is included. Picking it up, with its all-black colour scheme and stainless-steel frame, it looks and feels like a sturdy set of cans, living up to its TUF name stay.

The matte and brushed metal surfaces on the H3 Wireless are a plus – while headphones with glossy earcups look great at first, they’re soon coated in scratches from picking them up and down a few times. Here, the matte plastic and aluminium design looks just as fresh and scratch-free as the day it came out the box. 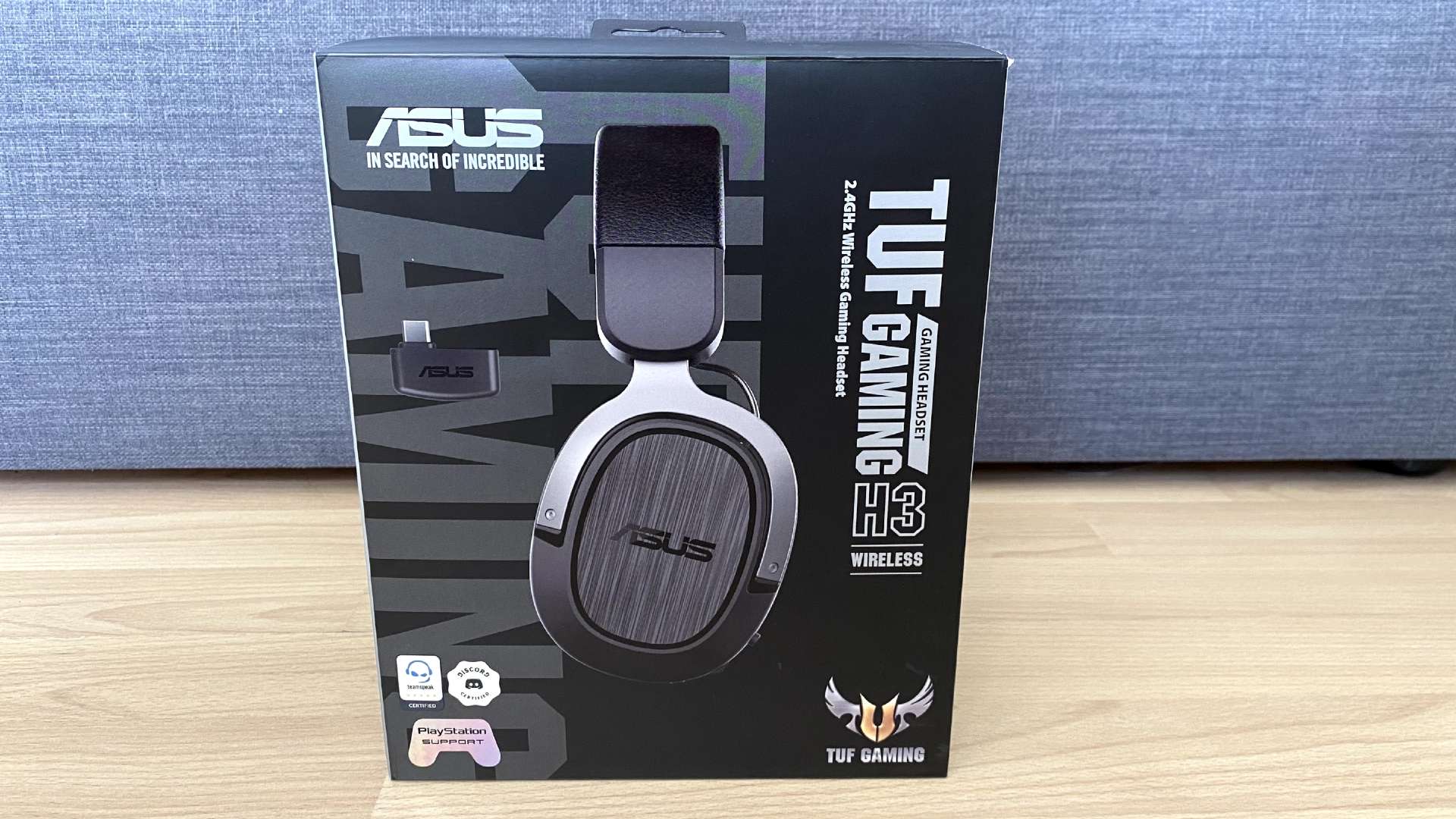 The comfort of the headset is top tier, with a thick leatherette headband and memory foam ear cushions, which make for a great experience. Despite packing a battery, it’s impressively lightweight at 307g, making it easy to wear throughout an entire working day and long gaming stints without any fatigue. However, the earcups do not fold inwards, which makes it uncomfortable to wear it round your neck when not in use. That also means it takes up more space if you want to chuck the H3 wireless in a bag with the best gaming laptop for on-the-go gaming.

On the left ear cup, you’ll find a volume wheel and microphone mute button, along with the USB-C charging port, power button, and unidirectional microphone – although it’s not detachable and gets in the way somewhat if you stand by using the best gaming microphone instead. 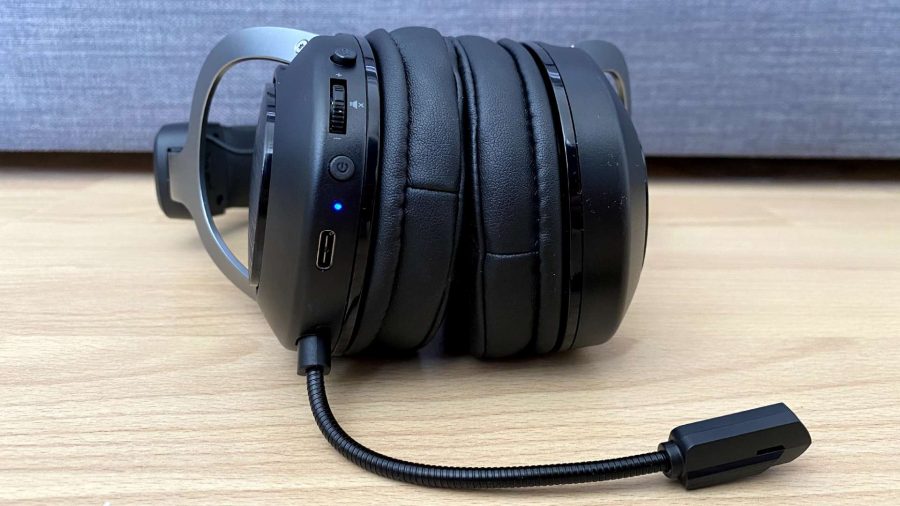 It uses the same 50mm neodymium magnets as the wired H3, which is by no means a bad thing. Being tuned for gaming, footsteps and gunshots in FPS games like CS:GO are crystal clear. Despite this, listening to music through the speakers is still an enjoyable experience

When it comes to the built-in microphone, you can’t expect broadcast-quality voice from such a small boom mic, but it’s more than clear enough for general communication with teammates. Noise cancellation does its job well, keeping background sounds like the click-clack of the best gaming keyboard minimised, but it’s no match for breathing.

This is solved by popping a windshield over the receiver, although curiously Asus doesn’t provide one. Sure, they’re inexpensive, but why should you do the legwork when brands like Corsair and HyperX include them with much cheaper headsets?

The H3 Wireless is powered by a 900mAh battery, rated for a 15+ hour battery life, similar to what you’ll find on most cordless models at this price. This rating was matched in my testing. Of course, it all depends on how much you’re using it, but in my case I tend to get about four days of play out of a full charge.

It connects to your PC through a 2.4GHz wireless USB dongle, much like the best wireless gaming mouse, so there’s no faffing around with Bluetooth connections each time you switch it on – it’s an instant, low-latency connection. The wireless range is rated for 25 metres, more than far enough to grab a drink from your fridge without missing out on Discord chatter. 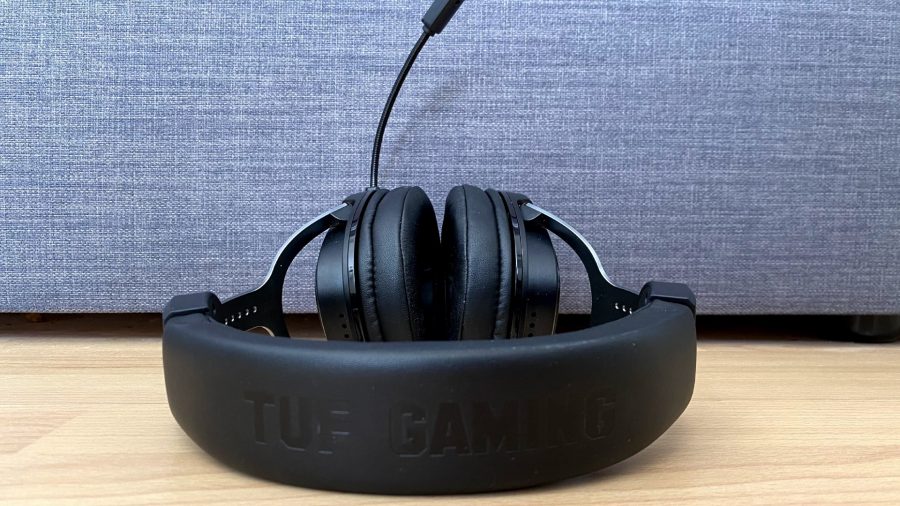 It also works flawlessly with PlayStation and Nintendo Switch – not Xbox, but that’s more Microsoft’s fault for only allowing fully-licensed headphones on the platform. Whilst it will connect to Android devices wirelessly with the USB-C dongle plugged in, it’s not the neatest solution. The lack of an extra 3.5mm headphone jack makes this set of cans less versatile (especially if you own an Xbox) than its identical-sounding corded sibling, while costing near double the price.

So, is the H3 Wireless still a good deal for a wireless headset, with its £89 price tag? Despite having the same internals as the H3, that variant was a steal for the quality on offer, so the H3 Wireless still comes out as a solid wireless model when compared to other wireless cans in its price range, such as the Corsair HS70 Pro.

If you solely game on PC, then that wireless connectivity is a welcome luxury. But, if you’re on a budget and can do without the wireless, we’d go for the cheaper wired H3 and pick up the best gaming mouse with that left-over money. If you’re a multi-platform gamer and you want a single set of cans to rule them all, you’ll want to look elsewhere.

Asus cuts the cord on one of our favourite headsets, but the added price over its wired sibling makes it a harder sell.