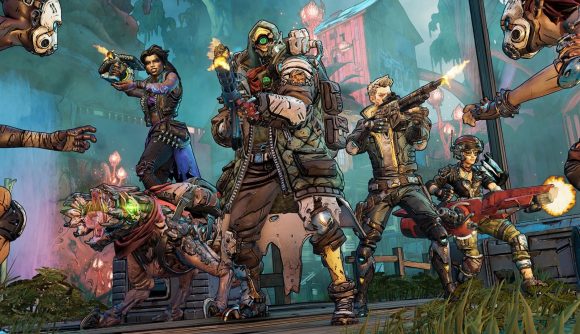 There’s a big new Borderlands 3 patch out today, and this one’s a pretty significant upgrade to the FPS game. Along with some of the more standard updates, additions, and changes, the latest patch adds full cross-play across both Steam and the Epic Games Store versions, as well as with Xbox One, Xbox X|S, Mac, and Stadia versions.

Cross-play in Borderlands 3 is handled through SHiFT Matchmaking, Gearbox explains, and you’ll have to opt into that the first time you fire up Borderlands 3 once the patch has been downloaded and installed. Cross-play with PlayStation is still unavailable, unfortunately.

There’s plenty more to today’s update, however. The Revengeance (no relation to Metal Gear’s Raiden) of Revenge of the Cartels is now live, but you can also enable any seasonal event at any time – they’re in the game permanently now, so you can turn on Bloody Harvest, Broken Hearts Day, and the Cartels event whenever you want in the main menu. Seasonal event gear, which heretofore had been only earnable by completing seasonal challenges, will now drop from the appropriate bosses when you kill them. Just remember to have the appropriate seasonal event activated in order to get the gear rolled with the season-specific anointments.

There are a host of tweaks and fixes included in today’s patch, as well as buffs to the Grease Trap, Iceburger, and Needle Gun weapons.

You’ll also notice that all of the True Trials have been activated, which means all Trial bosses have gotten a massive boost to health and damage. This event can’t be turned off, so tread carefully if you decide to take on these tough customers.

The Crossplay Update has arrived! Here's what's in it:

Finally, the character level cap has been raised to 72, and Gearbox has made a raft of adjustments to character anointments to go along with the new level scaling. Characters’ specific anointments have gotten pretty significant buffs, which Gearbox says is meant to shift the meta toward these and away from character-agnostic anointments.

The full patch notes are available over on the official Borderlands site.