The launch of Call of Duty: Black Ops Cold War and Warzone Season 4 is so close, but what should we expect from the FPS game this time around? The hidden nukes in Verdansk’s bunkers were finally launched, sending the map back in time to the ‘80s. Are nukes supposed to work like that? No one knows for sure.

The Warzone Season 3 Reloaded update added new landmarks to ‘80s Verdansk: Nakatomi Plaza from Die Hard and survival camps from the Rambo series. Although in Season 4 the plaza is under new management, now referred to as Downtown Tower, and the Nakatomi vault has been cleared of valuables. Season 4 is, however, getting two new points of interest – mysterious red doors and several crashed satellites to explore.

Expect to see major additions to Cold War’s multiplayer and zombies modes. Cold War is receiving another remastered Black Ops map, Hijacked, alongside three more maps. Outbreak is also getting a new area, heading to the zoo for its next adventure, complete with a main quest and fresh intel on zombies, which will lead into the mid-season Zombies experience update. Here’s everything we know about Cold War and Warzone Season 4.

Call of Duty Cold War and Warzone Season 4 will begin on June 17. Activision has confirmed this date on their Call of Duty blog.

The Cold War and Warzone Season 4 trailer gave us a glimpse of the new South African operator joining the game. In the trailer, the man wearing a red mask threatens an office worker to drop a satellite on top of Verdansk. The satellite appears to be a new location on Verdansk, allowing players to explore the destroyed remains of the machine. 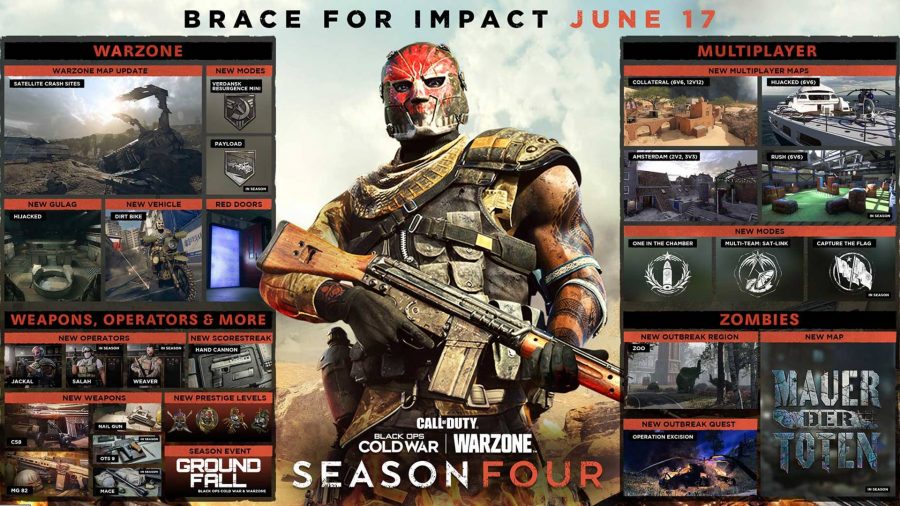 The Call of Duty Cold War and Warzone roadmap for Season 4 confirms a new Zombies map, three new modes, four multiplayer maps, and all new weapons coming this season – kicking off with Ground Fall, the timed event available at launch.

Related: Try out some of the best guns Warzone has to offer

The Cold War weapons were added to Warzone in Season 1 last December, but the majority of these guns felt weak compared to their Modern Warfare counterparts. The devs have spent months bringing the Cold War weapons up to speed, but this means the Modern Warfare guns haven’t been getting much attention. Underused weapons like the best Kilo 141 loadout and best Scar loadout may be reintroduced to the meta in Season 4.

While the ‘80s Action Heroes event may be over, it appears Nakatomi Plaza and the survival camps are here to stay… at least for the time being. However, satellites have crashed in Verdansk, a new point of interest to explore on the map, which could tie in to the initial timed event to find and secure SAT-links.

‘80s Verdansk may receive a fast travel system this season in the form of the mysterious red doors. This mechanic is used during the Cold War single player campaign to travel between locations. The subway system that was added to modern Verdansk has been removed in the ‘80s version, so the red doors could serve as a useful replacement.

According to a recent report from VGC, a new map will be coming to Warzone in the future to tie-in with the next Call of Duty game. The WWII-themed map will replace ‘80s Verdansk just months after it was introduced. This new Warzone map is set to go live close to the launch of Sledgehammer Games’ Call of Duty game.

Season 4 introduces five new weapons into the game, including three at launch and two in season.

Three new operators have also been confirmed for Season 4 – Jackal is available at launch, while Salah and Weaver will arrive in season. You can read more about them on the Call of Duty blog post.

Outbreak is getting a new region, Welcome to the Zoo, set within the Ural Mountains in a zoo overrun by zombies, further expanding on the Dark Aether story before a new map arrives mid-season. Mauer der Toten is the next chapter in Zombies and takes place in this new map in East Berlin.

And that’s everything we know about Call of Duty: Black Ops Cold War and Warzone Season 4. If you’re struggling to do well in Warzone, you may want to check out our best Warzone loadout drops to equip yourself with a strong loadout.