Are you looking for the best AK47 loadout in Warzone? The AK47 was far from the best weapon in the battle royale game at launch, but its fortunes soon changed with the Cold War integration. Not only is the Cold War AK47 now viable in the current meta, the Modern Warfare AK47 is a threat when built to focus on long range encounters.

There are a couple of ways most people choose to spec the Modern Warfare AK47. You can either strip it down so it behaves like one of the best Warzone SMGs, but the recoil is too high to land many shots with, or you can build it into an RPK-like Warzone LMG, which will lead to hefty aim down sight times. We’ve gone for the latter approach for the Modern Warfare variant, but with a couple of caveats that we feel make it genuinely viable.

This guide contains loadouts for both the Modern Warfare and Cold War variants of the AK47. Though these weapons share the same, they behave very differently in game. We recommend sticking to the Cold War version of the AK47 as it’s considerably stronger.

The improved Suppressor gives the Cold War AK sound suppression and increases the aim down sight speed – very useful stats for this high damage low recoil assault rifle. The barrel also increases bullet velocity and speeds up the sprint to fire speed. This does come at the cost of the AK’s effective damage range, but the impact is negligible.

We’ve gone for the 20″ Spetsnaz RPK Barrel which does impact the weapon’s vertical and horizontal recoil, but provides buffs in three key areas: effective damage range, bullet velocity, and strafe speed. Out of the three areas, strafe speed is arguably the most important as the AK is incredibly powerful with improved mobility.

Due to the downsides of the other magazines, you’re almost forced into picking the 45 Rnd magazine as this only affects reload quickness. The Microflex LED is a good option for the optics, since the ironsights make it quite difficult to aim at times since you can easily loose your target underneath your gun model.

The KGB Skeletal Stock is perfect for the AK47 playstyle, with a buff to sprint to fire time and aim walking movement speed, so you can stay prepared – though if you like to play a little more aggressively, swap it out for the Serpent Wrap.

Compared to the highly popular CR-56 AMAX, the Cold War AK-47 can carry 15 more bullets and has a faster TTK speed. We wouldn’t be surprised to see the AK-47 become the next meta weapon as the awful recoil pattern was the only thing holding this powerful gun back. 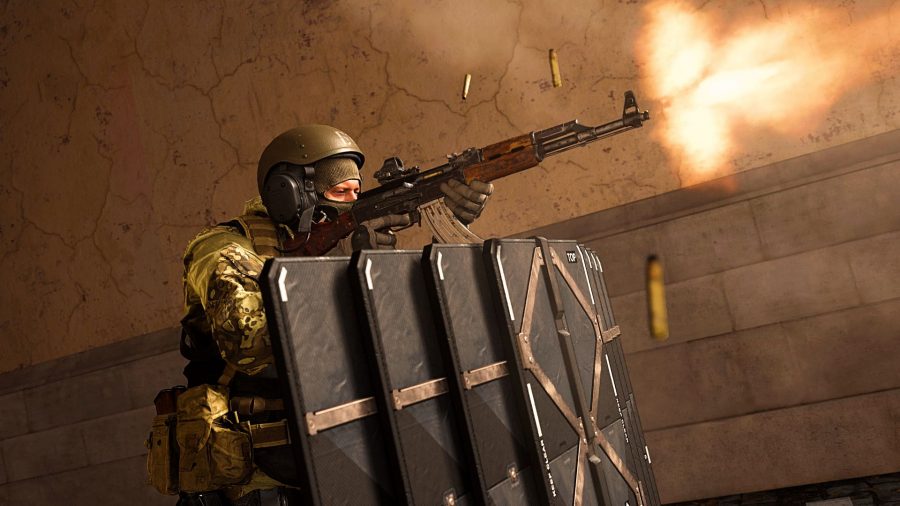 The best Warzone AK47 loadout is:

This build turns the AK47 into a RPK, except without the giant drum magazine. While the standard 30-round mag is limiting when it comes to taking down more than one player at a time, it keeps the AK47’s mobility and handling stats in a healthy place. The RPK Barrel and Monolithic Suppressor improve the AK’s long-range effectiveness, while the combination of grip, laser, and grip tape will make landing consecutive shots much easier.

More help: Our picks for the best Warzone loadout drop

If you prefer to handle horizontal recoil yourself then you might prefer the Ranger Foregrip. Another potential swap is to sub in a close-quarters stock for the Tac Laser, but we feel the Tac Laser adds more to the build while only occupying a single attachment slot.

And that’s everything you need to build the best AK47 loadout in Warzone. The Cold War AK47 has always been a tricky weapon to master, but it looks like players are learning to handle the heavy recoil. There’s a reason why this weapon tops our best Warzone assault rifles list – it’s seriously that good.