To help you make the most of what Firaxis is calling the biggest expansion Civ has ever had, we’re presenting our findings in a series of detailed yet digestible guides. We’ll give an overview of each civ and its unique traits, followed by a practical guide to making the most of them.

Hungary is something of an oddball in that one of its strongest bonuses eventually cancels itself out, but it can be great for conquerors who want to build up a lot of momentum quickly. For other new approaches to world domination, see our guides on the Ottomans, Incas, Maori, Sweden, and Mali.

Hungary is led by Matthias Corvinus, who had the extremely metal nickname The Raven King and laid claim to huge parts of Eastern Europe in the 1400s – and may just be the best Civ 6 leader to lead you to a domination victory. He was responsible for Hungary’s first professional army (represented in Civ 6 by one of its unique units), and certainly wasn’t shy about going to war with them. Nor should you be… when the time is right.

Leader: Matthias Corvinus – Raven King. Units levied from city-states get +5 Combat Strength and +2 movement and can be upgraded with no Gold or strategic resource cost. Each time you levy troops, you gain +2 Envoys with the levied city-state. Gain the Black Army as a second unique unit, which replaces the Courser, has increased Combat Strength, and gains additional strength for each adjacent unit levied from a city-state.

Unique Ability: Pearl of the Danube. When you build a district directly across a river from a City Center, you gain +50% production on that district.

Unique Unit: Huszár. This replacement for Industrial Cavalry has higher Combat Strength and gains additional strength for each Alliance Hungary maintains with another civ.

Unique Building: Thermal Bath. This structure for the Entertainment Complex replaces the Zoo and grants twice as many Amenities, while also giving +2 Production to cities within 6 tiles (as best as I could tell, this /does not/ stack with the bonus from Industrial Zones within 6 tiles). f there is a Geothermal Fissure within the city’s borders, you get an additional +2 Tourism and +3 Amenities.

Agenda: Raven Banner. As an AI opponent, The Raven King will frequently levy city-state troops for his wars and respect those who do likewise.

OK, damn. Hungary came out of nowhere to be maybe, /just maybe/ the overall strongest military civ in the entire game. The trick is that you really have to put in a lot of work and planning to make the most of your bonuses, and you’ll actually lose some martial efficiency in the late game as opposed to the mid. They probably aren’t the best pick for beginners. But if you’re willing and able to jump through all the hoops in Matthias’ path, you’ll feel like an unstoppable feudal warlord leading your fierce vassals into the fray to conquer all.

Get out of my sight. OK, fine. Well, you’re probably going to want to go for a Culture Victory. Aside from Thermal Baths, you’ll want to buddy up with as many Cultural city-states as you can find and levy their armies just for a laugh every once in a while to keep the Envoys flowing.

I can’t imagine playing Hungary as anything but a Domination-focused civ just because it’s so damn fun, but there is some side potential for a Diplomatic or Cultural Victory – leveraging the unique bonuses from your strong bonds with various city-states and getting some Tourism rolling with Thermal Baths. But let’s be real here. You’re The Raven King. You came to kick ass and peck at discarded corn. And you spawned in the middle of the desert for the third game in a row, so you’re already out of corn.

The twist here is that you’re not actually going to be building very many armies. Almost every man, elephant, and trebuchet you send into battle is going to come from levying city-states. This is a high risk, high reward playstyle, because if you find yourself without city-state allies because someone outbid you as their suzerain at a crucial moment, you can end up well and truly screwed. So be sure you’re not letting that happen, especially if you’re up against another city-state lover like Pericles. Focus your policy cards on getting as many Envoys as possible while prioritising Civics that do the same. You should also make Culture a strong, secondary focus to get these Civics and policies faster. 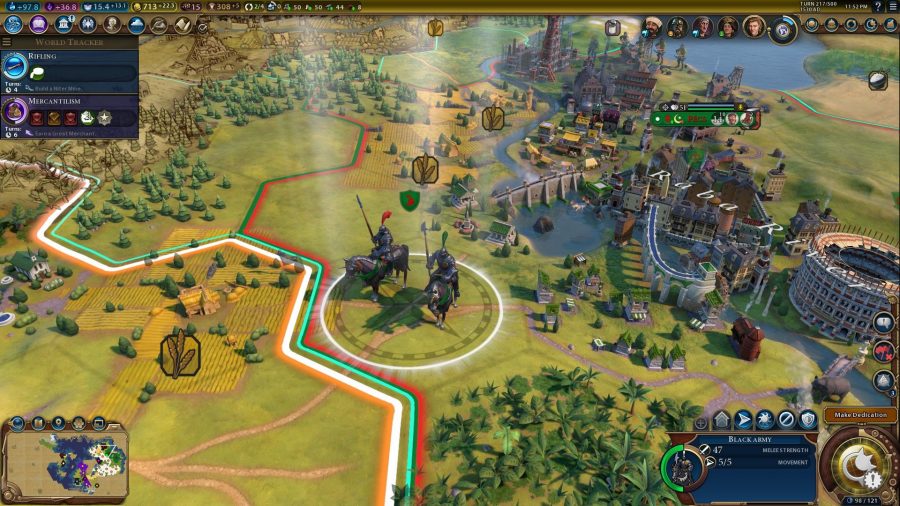 It’s smart to take Amani as your first governor and quickly get her final promotion so you can stick her in your most important city-state and not have to worry about maintaining their suzerainty very often. This ensures that, even if someone Envoy-bombs you to halt your advance or open you up to a declaration of war, you’ll always have at least one, sure source of troops to rely on. All the better if this is a Militaristic city-state located not too far from your capital. 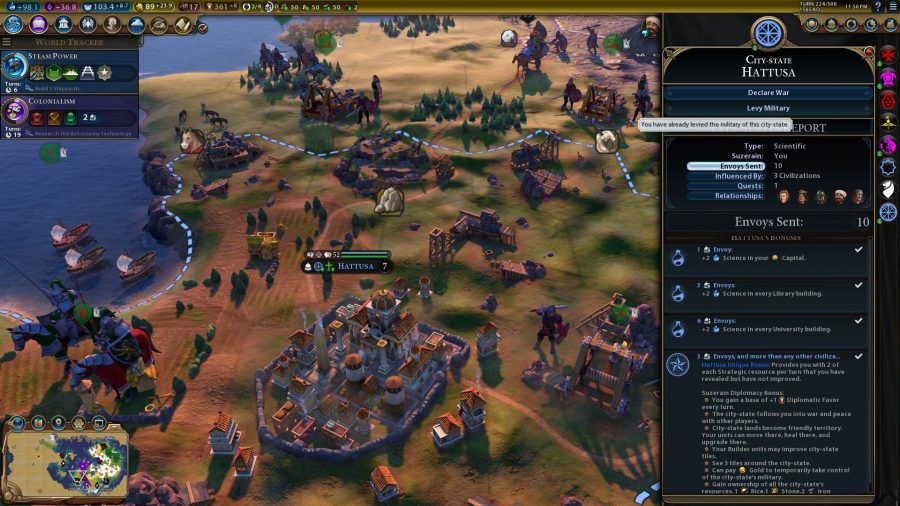 The other big concern is going to be Gold. You’ll save a lot of it not having to upgrade armies constantly, but levying city-states every time you want to get a war on will get expensive. And you’ll be looking for any even remotely good excuse to do so – not only because conquering gets you more stuff, but because levying troops grants you free Envoys and helps you stay ahead of the competition. So get some Commercial Districts and Trade Routes going. Form an Economic Alliance as soon as you can with whichever civ you plan to conquer last.

See, Hungary is all about divide and conquer. Since your Huszárs get their beast mode buff from the number of Alliances you have active, the best strategy for taking over the world is to be bestest friends with everyone on the map except the civ you plan to kill next. This means one of your best units is going to get progressively weaker the more civs you conquer. But hopefully this should be made up for by simply owning more stuff.

Read more: Civilization VI: Gathering Storm is great only for its civs

Once you hit the Medieval Era, it’s time to, well, go medieval. It will be very useful to plan ahead and make sure you’re in a Golden Age by this time, since it gives you a better Casus Belli – justification for war. You’ll also want to bank Diplomatic Favors to deflect any emergencies that get called against you. An easy way to grab these is to trade away strategic resources that you have little use for. Hopefully if you’ve been friendly to everyone except your current target, most of the international community will neglect to get involved stopping your reign of terror. Except Laurier. That guy is a pest. You know what? Probably take him out first. 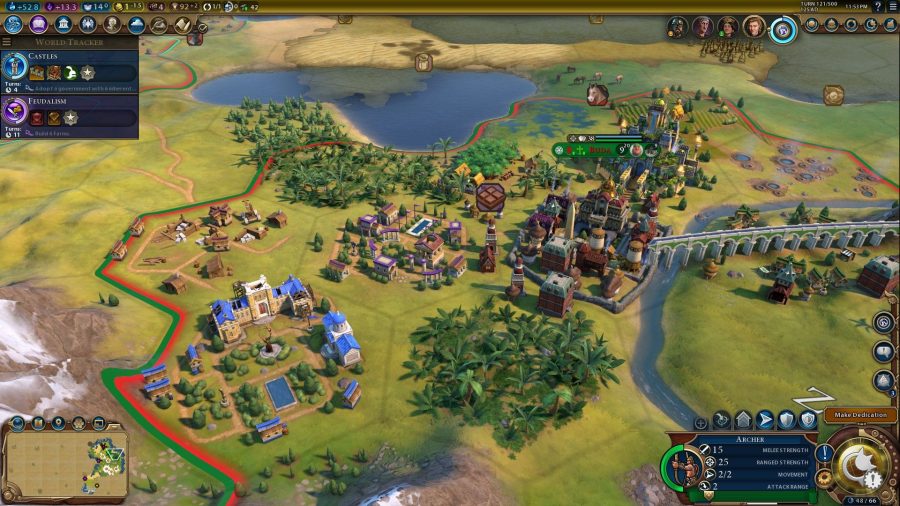 The battle plan is pretty simple: your Black Armies (I usually only needed one or two) lead the charge of levied cannon fodder. Sweep the enemy from the field. Attain glory. Repeat. The Huszár can perform the same song and dance with the added benefit that his combat buff doesn’t require specific battlefield positioning, so he can run around the flanks and rear charge the enemy like a proper cavalryman. Hungary also benefits from its first unique unit upgrading directly into its second unique unit, which saves you some Production and allows promotions to carry over on your key dudes.

As long as you don’t overextend yourself and try to court more city-states than you can realistically hang onto, it’s all over but the crying from there onward. If anyone makes it out of the Atomic Era alive, they can count themselves lucky to have not drawn the gaze of your beady, birdlike eyes. Maybe you’ll leave one other civ alive and decide to get a space race victory instead. Why not? You’re The Freaking Raven King and you do as you please. Ca-caw, fools. Ca. Caw.