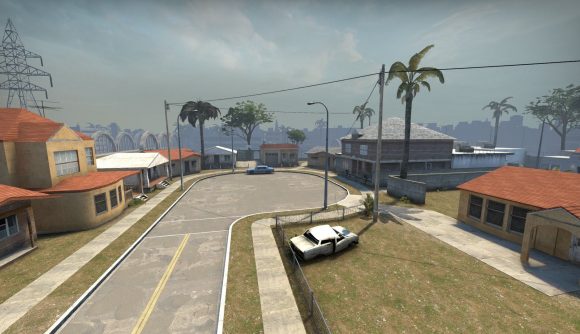 Counter-Strike: Global Offensive fans have taken us to many different spots in Valve’s FPS game via the magic of custom maps. Fall Guys, a London tube station, and even The Witcher 3’s Kaer Morhen (yes, really) – there are plenty of options about. Now, a CS:GO modder has taken the fight to Grove Street – you know, of GTA V and San Andreas fame.

Dido’s suitably titled Grove Street CS:GO map recreates the whole of the well-known cul-de-sac from Rockstar’s crime games series in Valve’s shooter, with inspiration taken from the original San Andreas version in particular. Found in the Davis area of Los Santos, and home to protagonist CJ in the 2004 game, it’s hardly an idyllic spot – but it’s really distinctive, and recreated really accurately in this new custom map.

There are all the features you might remember – the overhead road bridge at its entry, CJ’s ramshackle pad, the cluster of houses with fenced yards, an alleyway to the right, and the big concrete subway just beyond the street. Oh, and a smattering of palm trees, of course. It is Los Santos, after all.

It’s a really faithful rendition of the enormously popular old game‘s Grove Street, with the look, lighting, and landmarks of the original, and it’s available to play in the classic game mode.

If you’re keen to grab the custom map for yourself, you can find it at the CS:GO Steam Workshop here. If you’re a GTA fan, you can also check out what’s just dropped today in the game’s latest weekly patch at that link – there are triple rewards on land races, a new podium car, and more on offer this week.