Looking for an interesting CK3 start? Crusader Kings III landed to near-universal acclaim from critics – just check out our CK3 review. With a 91 on Metacritic and ‘Very Positive’ reviews on Steam, there are probably more than a few newcomers to the series scrambling with the question: Where in the world should I begin?

Many will mean this literally because, as most new players have probably realised, Crusader Kings III sets itself apart from nearly all others in the strategy genre by allowing you – with only a few exceptions – to play any ruler on the map, from hardscrabble tribal chiefs to illustrious feudal emperors. That freedom can be liberating, but also paralysing. With an entire world of rulers to choose from, who is worth choosing? While the game helpfully offers some interesting characters to select from, they tend to focus on a few key areas in Western Europe.

To help, we’ve highlighted some of the more interesting characters to play from both the 867 AD and 1066 AD CK3 start points, each with their own particular challenges and goals. 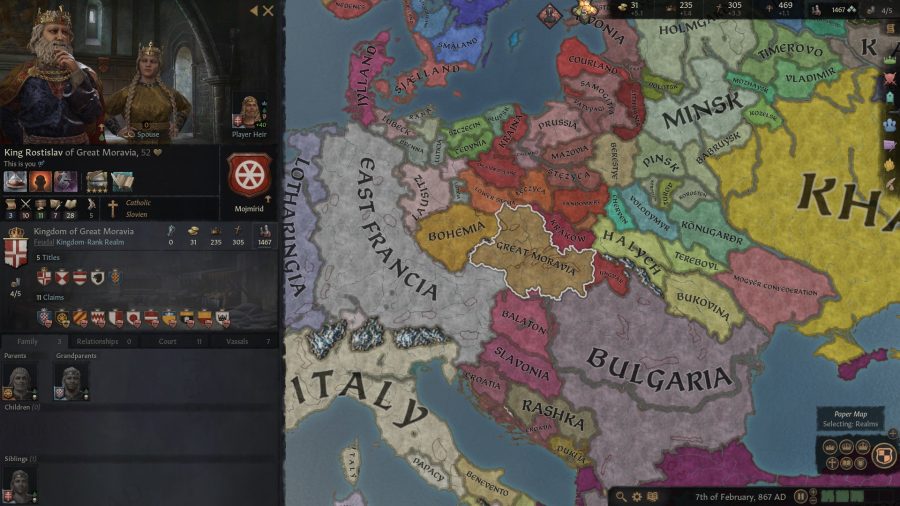 KING ROSTISLAV OF GREAT MORAVIA | THE REDEEMER OF THE WESTERN SLAVS

In 867, while the heirs of Charlemagne do battle for control of the Frankish Empire, Eastern Europe is fragmented into dozens of tiny, fractious Slavic tribes. Virtually all the Slavs of this eastern borderland hold true to the old gods, worshipping much the same as their ancestors have done. Except, that is, for the Kingdom of Great Moravia. A feudal, Catholic bastion in a pagan sea, Great Moravia is an ideal choice for a player with an understanding of the basics.

Going places: How to change your CK3 capital city

Because this compact kingdom is not in immediate danger of shattering under Confederate Partition, this is a great start for a slow but methodical playthrough. With plenty of room for easy expansion through holy wars in the east, as well as powerful rivals to defend against in the west, this is a position ripe with possibilities. The decision to unite the Western Slavs under a single crown makes for an excellent mid-to-late game challenge, as will the task of ruling a restive pagan hinterland from a Catholic capital. 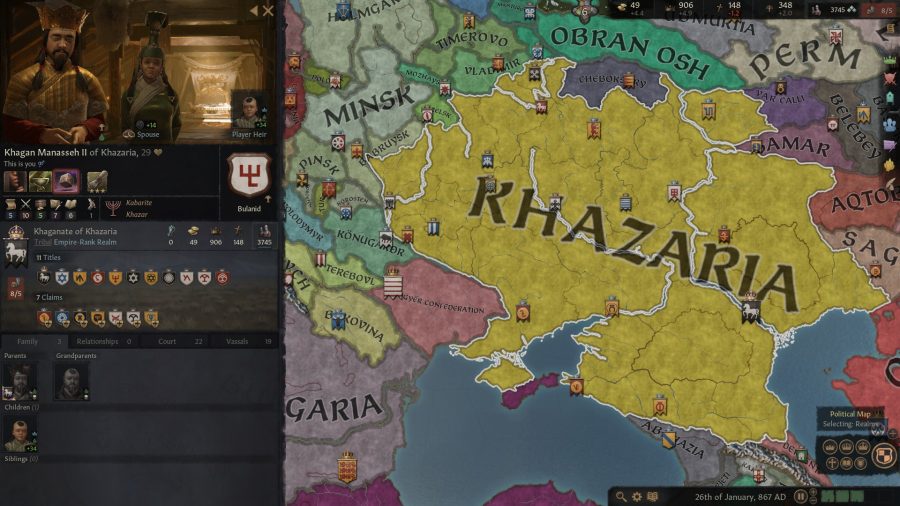 KHAGAN MANASSEH II OF KHAZARIA | THE MOSES OF THE STEPPE

There is only one independent Jewish state in the 867 bookmark. Where are they located, you might ask? The Levant? Ethiopia? Not quite. They can be found more than 1000 miles from the Holy Land of the Jewish people, on the vast expanse of the Eurasian Steppe.

The Khazar Khaganate is an empire-tier domain that rules with a vast swath of land above the Black Sea. Followers of the Kabarite sect of Judaism, they stand out significantly from the rest of the tribes on the steppe. Due to their large size at the outset, they can make for a relatively easy playthrough. That is unless you attempt to complete their decision to re-found the Kingdom of Israel, a task that will require you to move south through both the inhospitable Caucasus mountains and the twin fortresses of the rock-solid Byzantine and Abbasid empires. 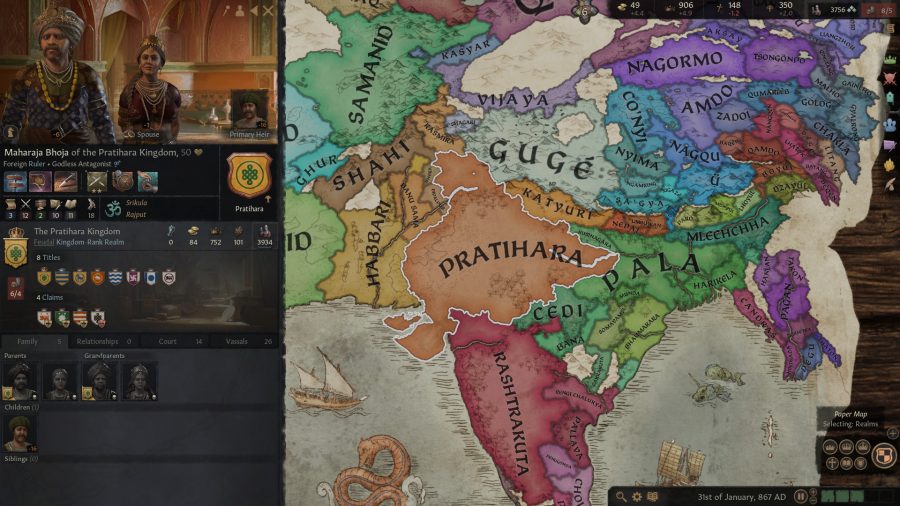 MAHARAJA BHOJA OF THE PRATIHARA KINGDOM | THE LORD OF THE GANGES

Turn on the development map mode and you will notice that, in both bookmarks, the Indian subcontinent is defined by extremely high development, even in the early game. The large Pratihara Kingdom, for example, has several counties with a starting development that rivals Europe’s great metropolis, Constantinople. What this means is that you will be at the forefront of economic development and technology, making this a relatively easy start in an often-overlooked part of the map.

Even still, starting with multiple kingdom titles means that your wealthy domain is at serious risk of fragmentation under Confederate Partition. Powerful rivals swarm all around, so you must use the incredible wealth and manpower of the kingdom to dominate northern India.

A fun mid-game objective is to aim for the ‘Lord of the Ganges’ decision, consolidating the Kingdoms bordering the Ganges into a single de jure crown. If you can swing that, you can also shoot for the ultimate endgame goal of uniting the three empires of the subcontinent into a single, massive crown: The Empire of India 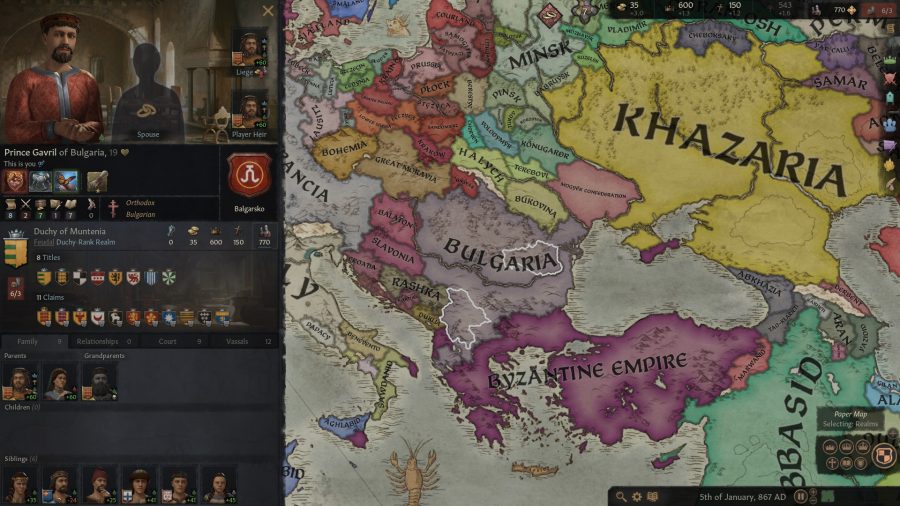 PRINCE GAVRIL OF BULGARIA | THE TSAR OF THE YUGOSLAVS

On a map, King Boris of Bulgaria’s position looks to be indomitable. His empire, an enormous state jutting into Southeastern Europe, has displaced the Byzantines in the Balkans, pushing the empire to the fringes. But his position is much more precarious than it appears.

The kingdom is split between the Tengri-following Turkish Bulgars in the north and the Orthodox, Slavicized Bulgarians in the South. An invasion of the Pannonian Plain by the migrating Magyars is almost inevitable. Defeating the invasion won’t solve all the Bulgarian’s woes either, as succession laws are set to tear the realm asunder on the King’s death, splitting the remains between Boris’ many powerful sons, among them Gavril.

Playing as a powerful duke within a kingdom is one of the most rewarding ways to play Crusader Kings. As Gavril, the king’s son, but not his primary heir, you get to go along for the ride as the historical First Bulgarian Empire either implodes from its contradictions or manages to somehow rise to displace Byzantium as the primary Orthodox power. A lot of Machiavellian realpolitik will be necessary to take the reins and steer Bulgaria to safety. 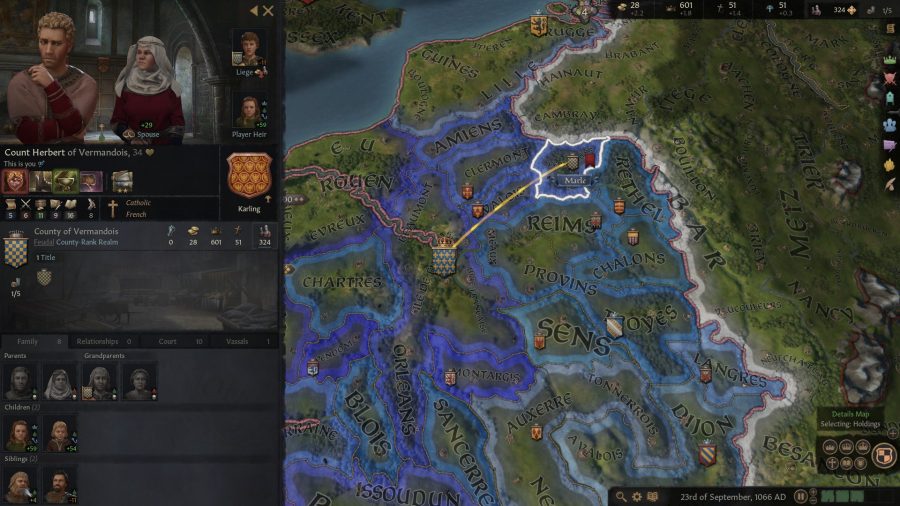 COUNT HERBERT OF VERMANDOIS | THE LAST OF THE KARLINGS

In the 867 start, House Karling has a virtual monopoly on Europe’s thrones. Charlemagne’s grandchildren sit on the thrones of West Francia, Lotharingia, East Francia, Bavaria and Italy. It’s not uncommon to see the map of Europe contort itself as the various Karling kingdoms pass back and forth between rival branches.

But things change, and by 1066 Europe has moved on. New dynasties – Capet, Salien, Godwin, Normandie – have taken the reins of the realms the Karling’s once ruled by right of blood and conquest. The bloodline has dwindled to a mere handful. Only a single landed Karling remains, the count of a small domain in northeastern France, Vermandois.

From these humble origins, can you rebuild what is arguably Europe’s most important house? Can you seize back the kingdoms and empire that Charlemagne built? Pluck Herbert from obscurity and rebuild the system erected by the grandfather of Europe. 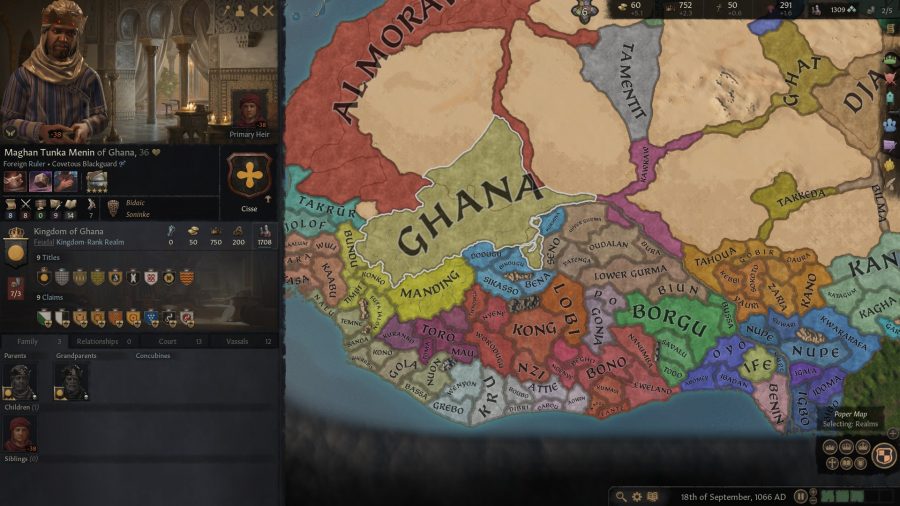 MAGHAN TUNKA MENIN OF GHANA | THE SPIDER IN HIS WEB

In the 1066 bookmark, Ghana sits like a spider in its web, the Sahara at its back, the powerful Almoravids in the north, and all West Africa waiting to be brought under its crown. The region is a mosaic of various cultures and faiths. Small, fragmented tribes – most no bigger than a few counties – are in constant conflict.

As Ghana – the largest kingdom and the only notable feudal government among a sea of tribal states, you are in a perfect position to bring order to the chaos. The Maghan also begins with control of 2 out of the 3 holy sites needed to reform the Bidaic religion (with the other third site close by), allowing a competent player to quickly reform the faith and become the powerhouse below the Sahara. For a final endgame challenge, the player can also seek the ultimate goal of fulfilling the decision to unite all of Africa under a single banner. 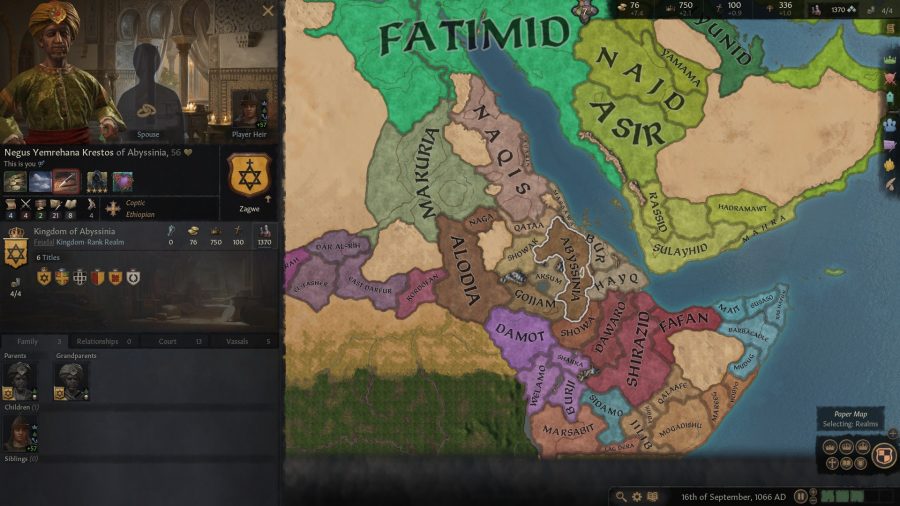 Negus Yemrehanna Krestos rules a Coptic rump state far below the formidable Fatimid Sultanate. Far to the North, both crusading Catholic Kingdoms and the mighty Orthodox Byzantine Empire will likely wage constant war against the large Muslim dynasties of the Levant.

Distance, and the chaos above, will provide perfect cover for the Negus to consolidate his Abyssinian domains. Though his realm starts out small, easy conquests can be found all around, and, without any immediate serious challengers, a scheming player can position themselves as the premier power in the Horn, or conquer the Nile and, like the mythical Prester John, open a third front in the great inter-faith struggle for control of the eastern Mediterranean. 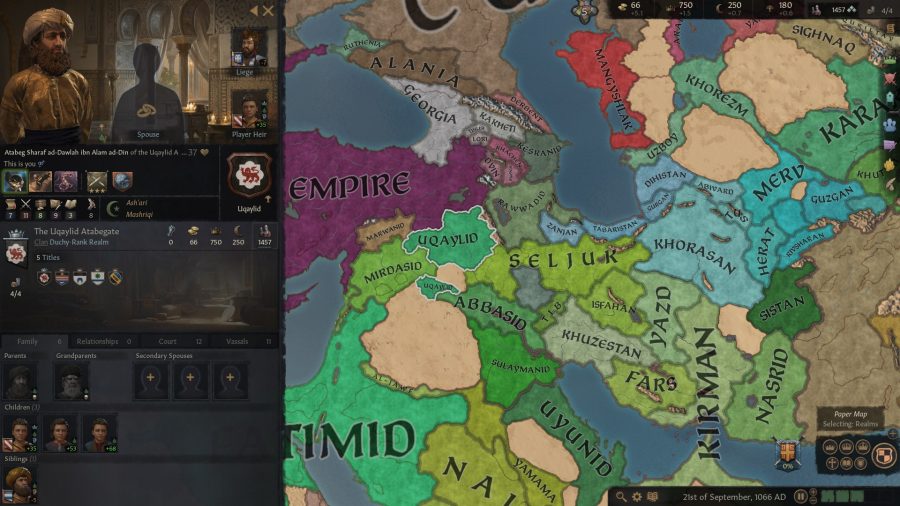 Among all the Seljuk vassals, Sharaf ad-Dawlah has one key distinguishing feature that sets him apart and makes him particularly worthy of play: he is the closest character to Anatolia who also has a decision to form the Sultanate of Rum title from the Byzantine’s eastern provinces. Once you can achieve this difficult goal, you can seize power from within the Seljuk court or attempt to leave early and carve out your own domain, a new Roman Empire of the east.

Defeating the Byzantines will be difficult, so you will have to take advantage of instability in the Empire. Alternatively, you could go the more historically accurate route: start as the Seljuk Sultan, locate Suleyman Qutalmishoglu (your distant relative and the historical creator of the Sultanate of Rum), and grant him the territories you conquer in the Seljuk-Byzantine war (a great way to raise levies), setting him up nicely to keep history on track.

While this is by no means a comprehensive list, all these ambitious social climbers have the potential to make for dramatic rises and catastrophic falls. And the great thing about Crusader Kings 3 is that these suggestions barely scratch the surface. Each region has its own unique dynamics at play and each rung on the feudal ladder has a different experience of those dynamics.

If you’re still getting to grips with this massive medieval sandbox then we suggest reading our CK3 beginner’s guide, as well as some of our basic guides to complex mechanics like CK3 faith, or how to use CK3 console commands. There is a world full of stories to tell. Go tell ‘em!