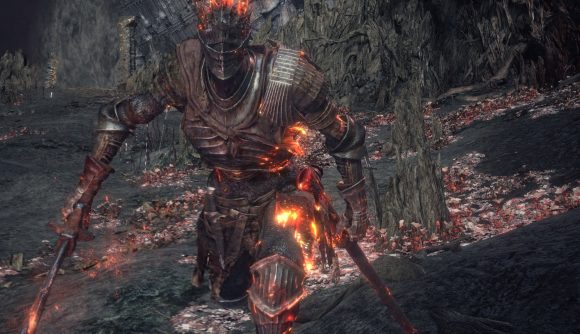 If you’re a certain kind of Dark Souls fan, you’re constantly informing people online that a boss was too easy. That’s just the way Dark Souls is – the challenge is in figuring out what to do, and once you’ve done that, it vanishes as if it never existed in the first place. There’s a mod out now that gives Dark Souls 3‘s final boss an extra shot of difficulty if you’re the kind of player who needs a fresh challenge in FromSoft’s excellent action RPG.

Cyanic’s Soul of Cinder but Harder mod ramps up the difficulty for Dark Souls 3’s final boss, who is already considered to be the toughest ultimate baddie in any of the Souls games’ vanilla campaigns, by restoring attack animations that were at some point cut by FromSoft prior to launch. This, Cyanic says, has the effect of turning Soul of Cinder into “an absolute chad” who is more appropriately called God of Cinder.

Dark Souls games have typically saved their most difficult boss encounters for the expansions, but Soul of Cinder is no pushover. I haven’t gone and checked out the newly restored moves in the mod, because I am a giant chicken, but I never got the impression he was too easy.

But there are plenty of players out there who thirst for this kind of content, and if that’s you, head on over to Nexus Mods to download Soul of Cinder but Harder. As always, you’ll want to exercise caution and mod at your own risk – Cyanic doesn’t think this one makes any bannable changes, but the best policy will be to make sure you play in offline mode or otherwise disconnected from the servers when you have this active.

Once you’ve got it downloaded, follow the instructions and drop the two modded .dcx files into their appropriate game folders and patch Dark Souls 3 with UXM. Then get ready for an old-fashioned pummeling.

Dark Souls 3 celebrated 10 million copies sold earlier this year, and it’s seen some pretty amazing mods – there’s even a pack of mods you can get that turn it into an FPS.