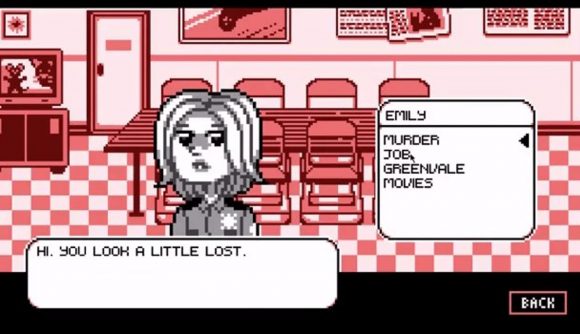 Deadly Premonition is an odd game, and this Game Boy version doesn’t make it any easier to understand, but it is a little more charming. Friendly Premonition turns the open-world game into a pixel-art narrative adventure, made by two fans who wanted to celebrate the strange goings on of Greenvale.

You can find the project on Itch, and being a demake that’s mostly limited to what’s feasible on a Game Boy aesthetically, everything occurs through dialogue and menus. You move from location to location, chatting to folks, finding out about their lives, and everybody else’s lives, learning the history of this quiet little rural community.

Though still a detective game, following FBI special agent Francis York Morgan as he questions Greenvale’s inhabitants, Friendly Premonition isn’t as story-driven as the original from developer Access Games. Instead, as the description puts it, its more of a “talking sim” where you absorb all the characters and locales that makes Deadly Premonition so singular. Certain people of interest have specific mechanics, to make poking through the conversations extra worthwhile. It took a year to make, and though it’s free, there are links to tip the developers, Victor Hannibal and Robin Wils.

“Friendly Premonition contains more than 125,000 words of character dialogue,” a message on the Itch page states. “You can play for an hour, or for five minutes. Have fun exploring and talking to everyone, and thank you so much for checking out my massive passion project!”

We’ve had a small wave of demakes this year, including variations on Bloodborne, Disco Elysium, and Super Smash Bros. Deadly Premonition’s director, Hidetaka ‘Swery’ Suehiro, announced he’s working on a new game with Goichi ‘Suda51’ Suda, of the No More Heroes games, late last year. We’ve had no word since, but No More Heroes appears to be heading to PC.