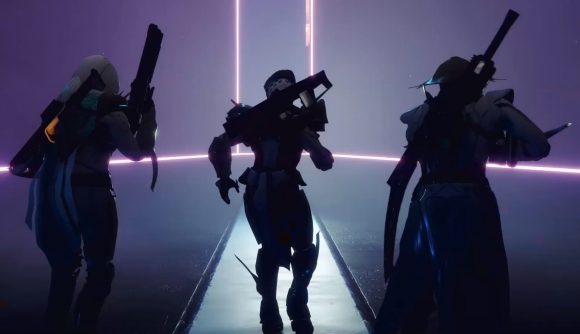 Destiny 2 developer Bungie announced the next big expansion to its sci-fi shooter today – Destiny 2: Beyond Light launches in September, and with it comes a host of changes to the base game. Those changes include a new vault system that will see older, less popular content cycled out of active status in Destiny 2 to make room for whatever is coming next, rather than starting over with a sequel. And Bungie gave us the names of two more big annual expansions to show it’s serious.

Bungie’s Mark Noseworthy and Destiny director Luke Smith called Beyond Light the “beginning of a new era in Destiny,” and it appears they were serious: in 2021, Destiny 2 will see an expansion called The Witch Queen, and that’ll be followed up in 2022 with the Lightfall expansion.

Along with Beyond Light, Smith said, “these three releases represent the new era in Destiny. These eras began back in 2014 in the Era of Light, when players entered Destiny for the first time,” first being resurrected and becoming full-fledged Guardians in the first Destiny.

“We are now coming out of an era of loss, one of our powers, of our mentors, our innocence,” Noseworthy added. “And soon, we will be entering an era of darkness. And if it’s not clear, we are all in on Destiny 2.”

The Witch Queen and Lightfall expansions will both feature all-new locations rather than reworks of places seen in 2014’s Destiny – those locations are now all potential draws from the Destiny Content Vault, which the duo explained later in the stream.

Noseworthy said that Beyond Light, The Witch Queen, and Lightfall will all culminate in a trilogy-capping “moment” – but stopped well short of saying anything about what that moment might be.

In any case, there’s plenty more Destiny 2 to look forward to – and no plans for a Destiny 3.