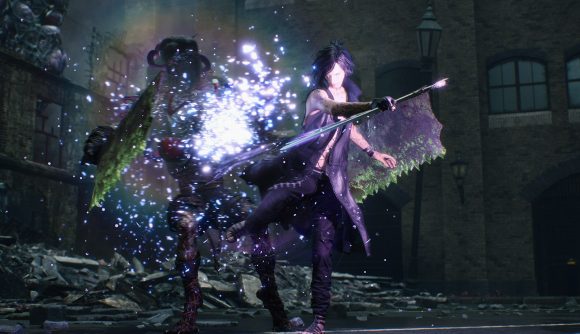 It’s been nearly a year since Devil May Cry 5 came out, and Capcom has now taken Denuvo anti-tamper tech out of the game. A recent update to the Devil May Cry 5 Steam database entry shows the alteration.

As spotted by a keen-eyed redditor, Capcom deleted two values in the Devil May Cry 5 Steam page’s third-party DRM category. Both Denuvo Anti-tamper and the limit of activating the game on five different PCs with one day have been taken off the page as of February 6.

Many PC players believe – and have shown evidence to make their case – that games running Denuvo’s anti-piracy software perform worse than versions where that tech isn’t present, and in the case of Devil May Cry 5, they’ve had a chance to test it out. Shortly after Devil May Cry 5 launched on Steam last year, players discovered a Denuvo-free version of the game in a test branch accessible through the Steam console.

That branch, while it suffered from numerous bugs that weren’t present in the release build, reportedly ran as much as 25% faster than the version with Denuvo enabled. While Capcom quickly deleted the test branch, players were still able to find and play with the .exe file by using Steam console commands.

With or without Denuvo, Devil May Cry 5 is a ton of fun, and it did well enough in sales for Capcom to consider the series “reinvigorated.” The stylish action and cheeseball one-liners still make for a compelling combination, and on PC, modders have had a ball adding in Kylo Ren and a full co-op mode.

Still, if it gives us 20 more frames per second, we’re more than happy with this change.