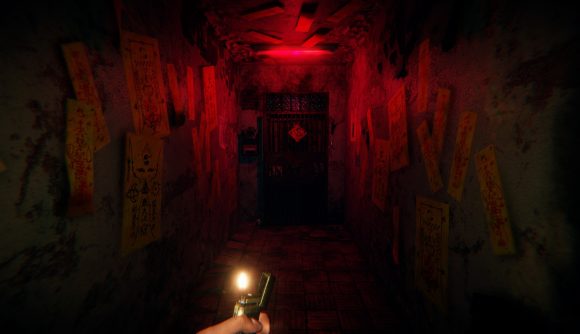 Devotion, the family-focused horror set in 1980s Taiwan, disappeared from Steam last year after a piece of in-game artwork mocking Chinese president Xi Jinping was discovered. After a review-bombing campaign led by indignant Chinese players, developer Red Candle Games pulled the game off shelves, and it’s been unavailable since. Now, Devotion is finally getting released again – but it’ll still be very hard to get your hands on a copy.

That’s because this new release, which is available starting today, is a limited run of physical copies only available in Taiwan, where Red Candle is based. The physical editions, which include a storybook, stickers, and unique VHS-style packaging, are on sale June 8-15.

That’ll come as a disappointment if you’re one of the many outside Taiwan who were hoping to experience Devotion’s unique mix of horror and familial guilt, set in a tumultuous time in Taiwan’s modern history. Playing as a man named Feng Yu, Devotion takes you through various points in his life, struggling with the expectations of both society and his wife and daughter. As Iain wrote last year, it’s a game that’s as much about haunting a place yourself as it is about being spooked by ghosts and gore.

Still, there’s reason to be hopeful. When Devotion was pulled from sale last year, the developer said it would not be returning “in the near term,” and Red Candle’s Chinese publishing partner, Indievent, had its business license revoked due to the controversy. Things seemed pretty dire, even after Red Candle Games issued apologies for the inclusion of the offending artwork.

Along with news of the limited re-release, Red Candle Games says it’s aware that this isn’t a solution that’s going to satisfy gamers overseas who had hoped to get a chance to play. However, in the statement (spotted by ResetEra), the studio says it is “continuing to explore other possibilities, and is seeking patience and trust from gamers.”

Hopefully that means a wider, international digital release is on the way, sometime in the future – we’ll just have to wait a while longer before we get our hands on it. In the meantime, check out our favourite horror games for PC.