This month, fans of Fortnite’s Save the World mode got the news they’d been dreading: Epic announced it planned to “slow down” development of new content for the mode and put its seasonal updates on an annual basis. The writing had been on the wall for years: Save the World was the mode Fortnite originally launched with, but it was quickly upstaged by the arrival of Battle Royale, which went on to become a global phenomenon. So where’s a dedicated Save the World player to go now? The answer may well be Drake Hollow.

Drake Hollow is the upcoming release from The Molasses Flood, the studio responsible for the charming but dark The Flame in the Flood in 2016. With Drake Hollow, the developer has kept much of the American rust belt charm of its first game, but transported it into a more whimsical mash-up of Fortnite and Narnia. As a young person pulled away from a vaguely Appalachian industrial town, you find yourself on an island surrounded by strange mist, taking advice from a talking crow who says your help is required to heal the world and bring back the drakes.

Having played too many videogames, I naturally assumed he was talking about dragons. ‘Drake’ can also mean a male duck, but as it turns out the crow isn’t talking about them, either. The drakes in the Hollow are adorable little radish babies who have been driven underground by a malevolent force called the Feral, and it’s up to you to cleanse the archipelago of evil so they can return to their full strength.

After a brief introductory sequence, you’re on your own to explore the surprisingly large world. The first island is only a taste of what’s to come, but it provides a sense of the fundamentals: you’ll pick up improvised weapons like hatchets, ski poles, and pesticide sprayers, and use them to defeat the red-fanged monstrosities prowling around. You’ll also be picking up resources – cutting down trees, looting boxes, rummaging through old cars – to bring back to camp and build additional structures.

The drakes need places to sleep, food to eat, and activities to keep them occupied since, as the crow explains, they can “literally die of boredom.” You’ll find schematics littered around the world which can unlock more structures, as well as new drakes to bring back to camp for you to nurture and level up. 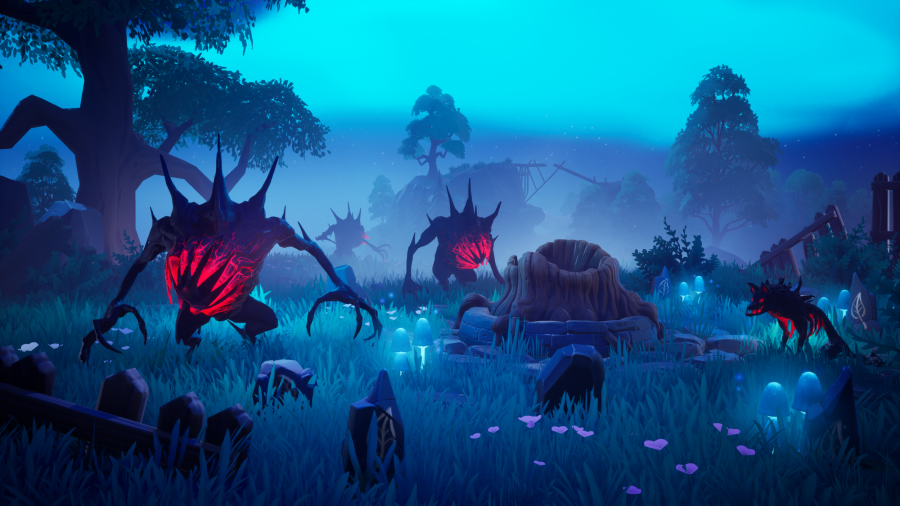 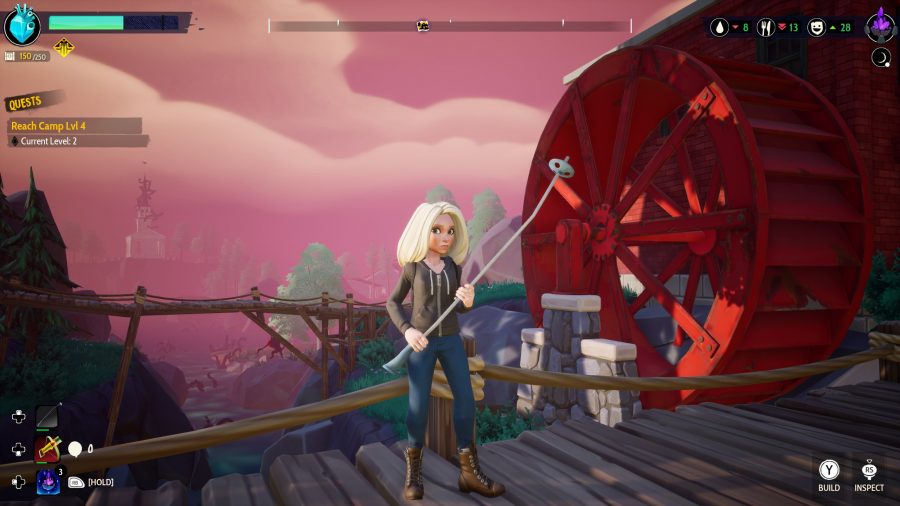 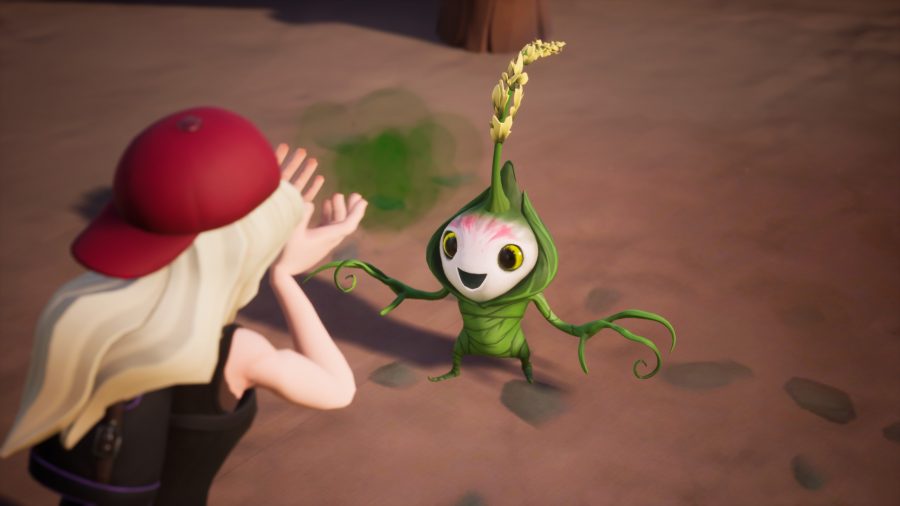 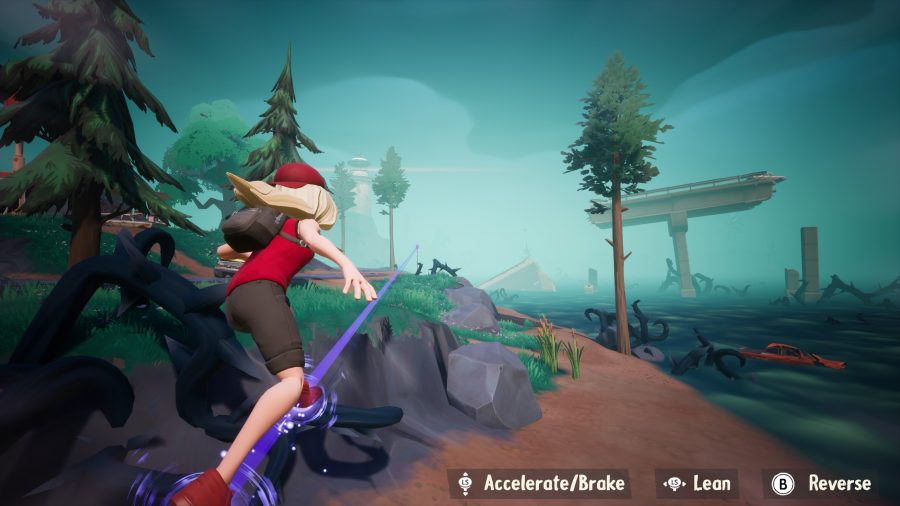 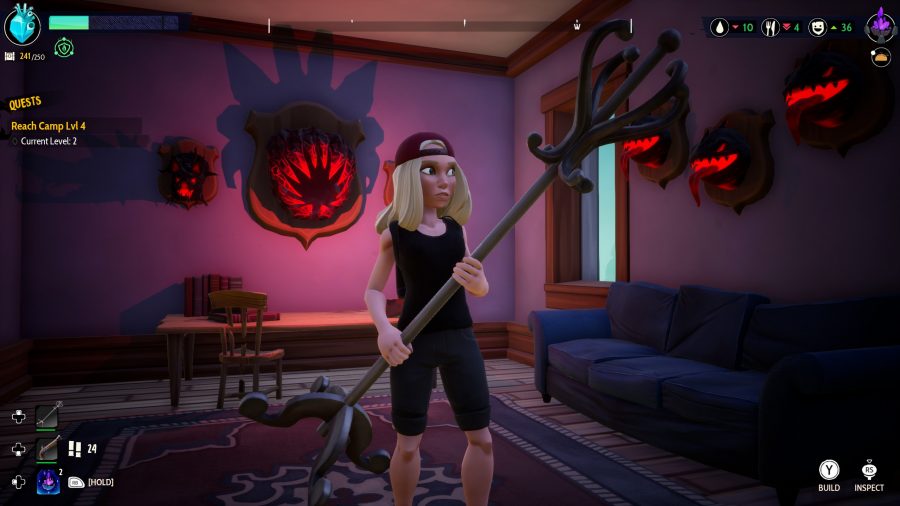 Unlike Save the World, where much of this management activity takes place in menus, Drake Hollow keeps you in the action, which seamlessly transitions from base building to pet care to combat to exploration of each procedurally generated region. Once you’ve unlocked the ability to craft Aether Wards, you’ll be able to penetrate the shallow sea of poisonous mist and travel to nearby islands, and each of these has new resources to find and enemies to defeat. On every new island you reach, you’ll have to destroy thorny nests of Feral infestation, which opens the opportunity to link resource trucks back to your main camp.

For all its cartoony looks, there’s a lot going on in Drake Hollow. Resources must be carefully monitored to make sure your drakes – which need more food, water, and entertainment as they get older and larger – are happy and healthy. You’ll need to keep an eye out for a raid timer on the right side of the screen, as this will let you know when creatures are approaching your camp and give you a chance to travel back to defend it.

There are countless bits and bobs to pick up, from the standard wood and twigs you get from chopping down trees to more processed crafting materials like shoelaces and bits of upholstery. There’s the constant creeping sense that you’re not paying enough attention to any one of a dozen meters that are always ticking down, which winds up being a pretty definite nudge toward playing Drake Hollow’s co-op mode. 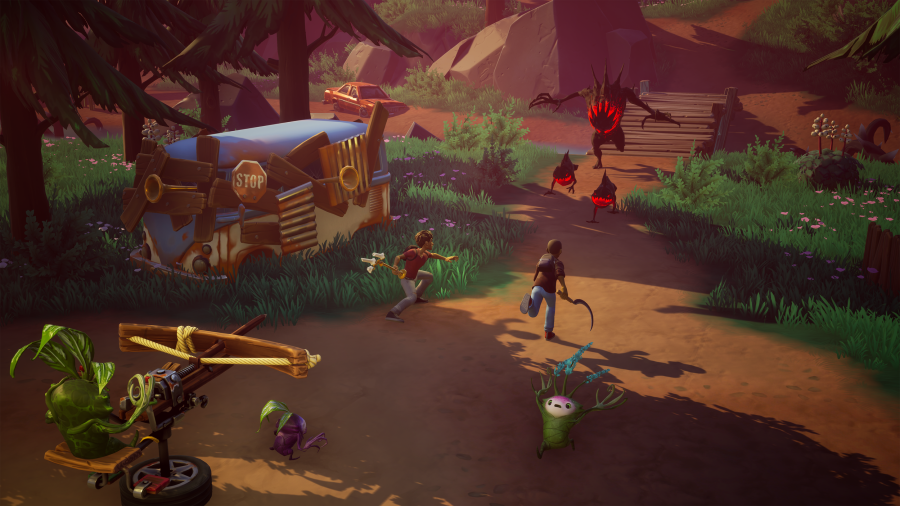 I haven’t been able to test this element of Drake Hollow yet, but it’s not hard to imagine it hitting the familiar rhythms of Save the World. Four players split up to explore islands and pick up resources, returning to camp to stash loot and fend off raids as a team. The Molasses Flood promises there are more challenges in store, too – as you get close to completing each one-square-mile region, you’ll eventually attract the attention of a powerful boss monster.

There's a gratifying, organic feeling to the way your boundaries for exploration expand alongside the growth of your home base

After that, there’s still more: new regions, new seasons, and new stuff to collect. You’ll take your drakes and the village you’ve built with you into subsequent areas, which are sure to hold further mysteries. A ghostly cat sitting atop a refrigerator in an abandoned house hints at some secret I’ve yet to discover, but in the meantime there’s the constant sense of building, maintaining, and caring for the little settlement I’ve established in the first zone to keep me contented. There’s a gratifying, organic feeling to the way your boundaries for exploration expand alongside the growth of your home base, and the relationship between these forms the core of what makes Drake Hollow so satisfying – you’re not just exploring, you’re finding materials that you can use back home. And you’re not just building more structures at camp, you’re creating a network to support exploring  uncharted islands.

Save the World certainly has its charms, but with Fortnite’s strange, original mode heading out to pasture, it’s a relief to find a game that’s taking some of its good ideas and pulling them in a new direction. If you’ve been down about the state of Save the World, Drake Hollow could always use your help. It’ll be coming to Steam later this year.