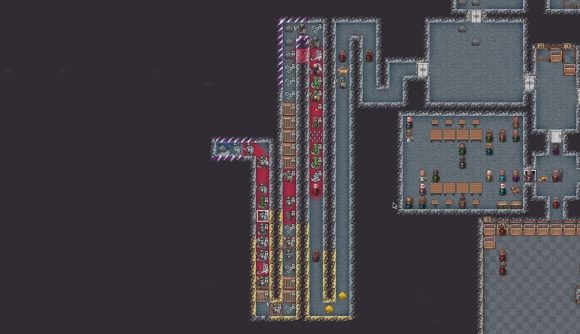 Long-time fans of Dwarf Fortress will be familiar with goblin raids. Once you’ve established a thriving base, the riches you produce within it becomes irresistible to the violent little brutes, and they come in massive hordes to take it. Dwarf Fortress co-developer Zach Adams has shown off a simple way of dealing with them in the new version of the colony management game due out on Steam (at some point).

Adams’ fort is dug into the cliffs that line a waterfall gorge, and it has two upper entrances, both covered by lever-operated hatches. Under normal circumstances, the hatch that’s open leads down a long stairway that leads to the water’s surface below the waterfall, where there are store rooms, workshops, and meeting areas immediately accessible.

However, when a raid draws near, Adams directs his dwarves to close that hatch and open the one covering the other entrance. The goblins head straight for it, not realising that it isn’t just a normal entry into the fortress – instead, this one leads to a long hallway that doubles back on itself and is absolutely jam-packed with lethal traps. 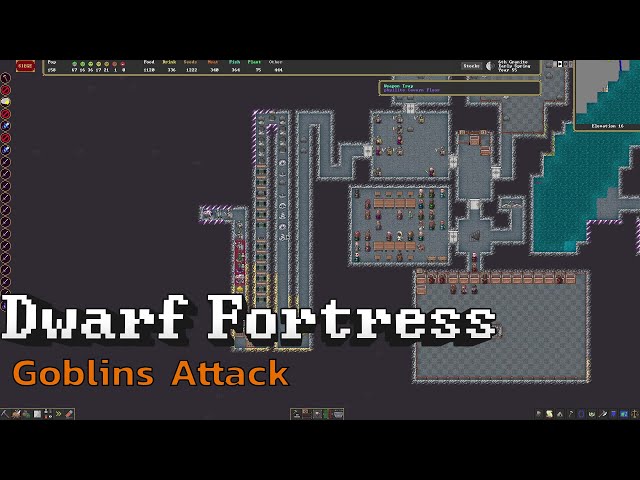 The huge mob of goblins, which outnumber the local dwarf militia by a large margin, files into the hallway, only to be slammed in cages, squished by falling rocks, and gored by floor-mounted corkscrew traps. Their numbers advantage dwindles significantly.

The results look as though the dwarves have rolled out the proverbial red carpet, but it’s really the goblins who are responsible for the change of colours. Yes, Dwarf Fortress is definitely going to have gore now that graphics have been introduced.

The goblins eventually give up, but only after a frankly disturbing number of casualties. Adams eventually opens the doors to let his militia mop up the stragglers, and to get ahead of a pair of misbehaving dwarf children who have decided to misbehave and defy his orders not to go picking up corpses during raids.

The goblins captured in cave traps, Adams says, can be safely transported up to the surface and into the enclosure where he keeps a giant dingo he bought from a travelling group of elves. We’ve also heard they can be hurled into a volcano, if you’ve got one handy.

We still don’t know when Dwarf Fortress is coming out on Steam, we get incrementally more excited about each time we see one of these clips.