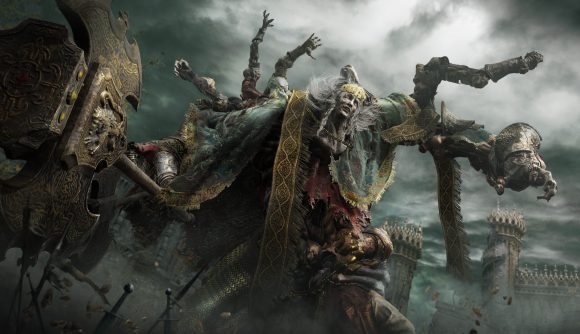 After about two years of hints and guesses, we suddenly have a frankly staggering amount of specific information about the hotly anticipated RPG game Elden Ring, which the new trailer has revealed will be in our hands early next year. FromSoftware president and game director Hidetaka Miyazaki has granted several interviews in the days since the trailer debuted, and he’s provided additional details and context for what we saw in the teaser.

Miyazaki says Elden Ring will be a more “manageable” game than the Souls series has been, and has explained some of the backstory, which was created in collaboration with American fantasy author George R.R. Martin.

Speaking with Japanese games magazine Famitsu, Miyazaki said Elden Ring is more “manageable” than past games FromSoftware has made. However, it’s still going to be a challenge, as he says it’ll feature the tough enemies fans of his games have become accustomed to. However, there are new elements to ease progression: there’s an overworld map, for instance, and fall damage is low to keep players motivated to explore.

In both the Famitsu interview and a discussion with IGN, Miyazaki said Elden Ring’s game world is split into six distinct areas. Each of these is ruled by a demi-god that will also serve as the area’s boss – they’re characters who hold a piece of the Elden Ring itself, and who have their own heroic pasts as the old gods of the Lands Between.

Within each region, you’ll find a dungeon line. These include locations like catacombs, fortresses, and spider-infested caves. You’ll be able to explore them at will, and they’re linked by a hub area – although this won’t be accessible right from the start.

From the Famitsu interview with Miyazaki

– confident that Elden Ring will arrive on its release date
– character creator
– multiple endings
– much higher degree of freedom than before
– optional bosses
– Battle arts from DS3 return but are not fixed to a weapon (~100 techniques) pic.twitter.com/efUqwEsZiL

Elden Ring also features a skill system, similar in part to the one found in Dark Souls III. Here, however, skills are found through exploring the world, and you’ll be able to find more than 100 of them. These you’ll be able to attach and use with whatever weapons you see fit, allowing for even more build customisation than we’ve seen in the past.

Similarly, you’ll be able to find and collect summonable spirits to aid you in battle – and these can include the souls of fallen enemies. You’ll be able to improve these somehow, and some will be apparently “useless” (but have other, perhaps hidden, traits that could be helpful).

We’re looking forward to the Elden Ring release date as much as anyone, so we’ll be looking to the sky until January rolls around.