So you want to know about Elden Ring’s Divine Tower? Maybe you’re looking for a specific Divine Tower location? These mysterious monoliths are where you awaken the main six Elden Ring Great Runes, which are dropped by the key Elden Ring bosses, also known as Demigods.

Before you can make use of a Great Rune’s power, you’ll first need to awaken it at one of the five Divine Towers located about the map. Each Great Rune can only be awakened at a specified Divine Tower, which is listed on the Rune’s description. Note that there are a few Great Runes that are not dropped by Demigods and don’t need awakening at a Divine Tower as they’re used for other mysterious purposes.

With six bosses and six Great Runes in the open world game, you’d be forgiven for thinking there were six towers to find, but you’ll only need to find five; one of the towers is used to awaken two different Great Runes. How unusually convenient. Here’s everything you need to know about Elden Ring’s Divine Towers and where to find them.

Here is every Elden Ring Divine Tower and location:

The Divine Tower of Limgrave is where you awaken Godrick’s Great Rune. It is located towards the top of the area near to the border with Dragonbarrow. You can’t access it via the open world; instead you need to go back to Stormveil Castle, where you defeated Godrick.

Go back into the legacy dungeon itself, defeat the Lion Guardian, and go through the doors it was protecting (roughly in the north-east section) which leads to a bridge. There you must beat three Guardian Golems, one of which fires gigantic arrows at you. Provided you survive, you come to a broken section of bridge, where a teleporter allows you to bypass the rest of the broken bridge segments and drop you at the entrance of the tower.

The Divine Tower of Caelid is where you awaken Radahn’s Great Rune. It’s in Dragonbarrow, north-east of the Deep Siofra Well. This tower requires some careful navigation as you traverse roots, ledges and ladders along the side of the tower. A Godskin Apostle also guards the basement. 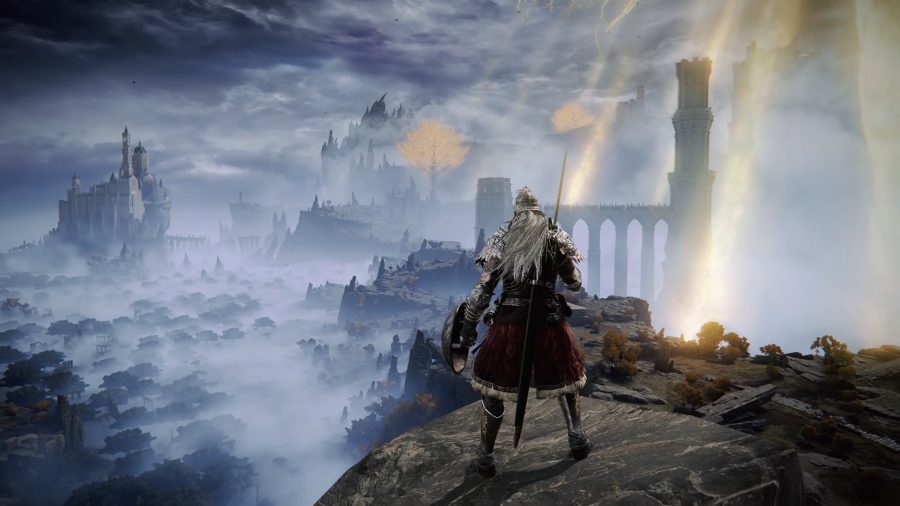 The route to get to this tower is close to where you defeat Morgott. You’re looking to access a long wall in the Capital Outskirts area, which you can access from the east of the Leyndell, Royal Capital area.

Note that in order to enter Leyndell in the first place you will already need to have found and awakened two Great Runes. You also won’t be able to access the route to the tower until you’ve defeated Morgott, so you will need to beat that Demigod first. Specific instructions are available in Dead Zpikes’s YouTube video.

The Divine Tower of West Altus is where you awaken Rykard’s Great Rune. You need to locate the entrance to a sealed tunnel located just outside the lower west entrance to the Leyndell, Royal Capital area to the south of the Altus Plateau. It’s north-east of the Minor Erdtree Church and the tunnel is guarded by the Onyx Lord mini-boss.

The Isolated Divine Tower is where you awaken Malenia’s Great Rune. It’s so-called because – as you look at it on the Elden Ring map – it’s right in the middle of the ocean above Dragonbarrow but below the Mountaintops of Giants.

In order to gain entry, you need to head into the centre of the Leyndell, Royal Capital area and look for a Site of Grace known as the West Capital Rampart. From there, look for a teleporter that will send you right to the base of the tower. Specific instructions are available in Dead Zpikes’s YouTube video.