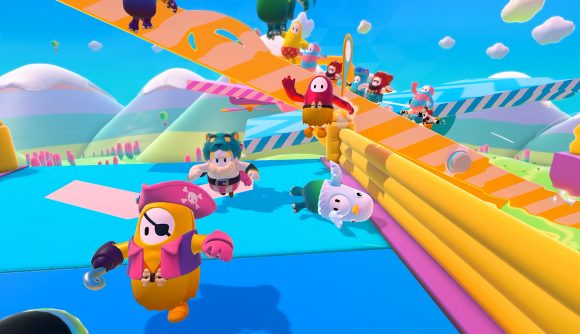 Oh, those naughty Fall Guys! Now they’ve gone and started an all-out bidding war, pitting clout-hungry Twitter brand accounts against each other for a chance at a coveted Fall Guys skin. The winner will be the brand who pledges the most money toward a UK-based charity that helps players with disabilities.

Ever since Fall Guys launched, official brand accounts on Twitter have been after developer Mediatonic to create crossover skins for the quirky little battle royale game. PC component manufacturer AOROUS, G Fuel energy drink, Chuck E. Cheese, KontrolFreek… even the likes of KFC has been pitching designs to Fall Guys. Today, the Fall Guys official account announced that Mediatonic will accept a pitch from the company that makes the largest monetary pledge to SpecialEffect, the UK not-for-profit that helps gamers with physical disabilities by providing equipment like adaptive controllers and eye control systems.

There’s already a pretty intense bidding war underway, and it’s produced some designs that are actually cool. Rivals of Aether, a Smash Bros. style fighting game, pledged $10,000 and offered a Fall Guys Ranno outfit. Warframe got in on the action too, upping the ante with a $20,000 pledge and a Lotus outfit.

Here’s that design, with art by Tenno designer Cole Rudge:

The Lotus is throwing her helmet into the ring… but she'd like company!

Another bid came in from Pink Gorilla, an independent videogame retailer in Seattle, and more have come in from esports organisations, clothing brands, and energy drink manufacturers.

As it stands, Fall Guys is already getting a Team Fortress skin, and it’s been two of Steam’s top 10 best-selling games since shortly after it launched. The game has sold more than two million copies on Steam.

We’ll be excited to see who wins this contest, which will run for two weeks. In the meantime, we’ll be leaping for our own crowns (if we can perfect our Slime Club run, that is).