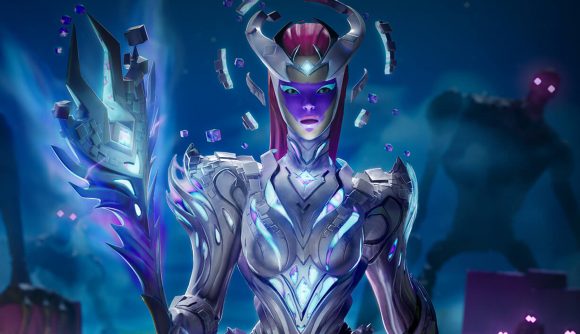 It seems like the Fortnite 18.40 release date has been pushed back and won’t launch this week as previously thought. Fortnite v18.40 will now land a week later on November 16 instead – and apparently it will also be the last update of Chapter 2 Season 8 before it concludes next month.

Fortnite version 18.30 was released at the end of October and brought with it the invasion by the Cube Queen – who can also be earned as a free skin by completing various missions – and the transformation of the centre of the island’s map into the Convergence.

It was presumed that the game’s next patch, version 18.40, would drop next week – on November 9. However, according to reliable Fortnite leaker iFireMonkey on Twitter that might not be the case. Epic had previously stated that the upcoming Accolades device for Fortnite content creators – to help players better earn XP in Creative modes – would be available in the 18.40 update. Now the Accolades webpage says that it’s not available until November 16 – which is also a patch day for Fortnite.

It’s also worth remembering that version 18.40 is actually the last update of the current season, which will come to an end on December 5 – at least, according to the end date of the current Battle Pass – so players have just this month to unlock the Cube Queen and Marvel villain Carnage, amongst others. We’re still yet to see the long-rumoured appearance of Naruto as a skin, so maybe he will drop alongside the 18.40 update.

Of course, the big Fortnite news right now is that League of Legends’ Jinx has made it to the game to celebrate the release of the Arcane animated series which launched this weekend on Netflix. Whether more Fortnite skins will follow Jinx is yet to be seen, but we hope so.